High School Graduates All Failing Students
Alex Newman & Dr. Duke Pesta Discuss
Despite many of them practically never showing up to class and failing in virtually every subject, every single student at Ballou High School in the nation’s capital graduated and received a diploma. Based on their fraudulent credentials, they all got accepted to college, too. But then, the school officials involved in the colossal scam got caught. The mega-scandal surrounding the widely acclaimed government school in Washington, D.C., first uncovered by the far-left, taxpayer-subsidized National Public Radio (NPR), is in the process of erupting. One analyst, writing at TheFederalistPapers.org, has even labeled this the “Worst Public School Scandal of Modern Era.”
GRADUATION INVESTIGATION AT BALLOU HIGH SCHOOL, WASHINGTON, D.C., REVEALS STUDENTS SHOULDN'T HAVE GRADUATED
Last June, it was a happy story of 'defying the odds.' Ballou High School's Principal said each of their 170 students not only graduated, but received a college acceptance letter. Now, a WAMU-NPR investigation claims a lot of these kids shouldn't have graduated.
Ballou High School graduation scandal continues

Posted by John at 3:50 PM Links to this post

ROBERT SPENCER ON THE MEDIA WHITEWASH OF "ALLAHU AKBAR"

ROBERT SPENCER ON THE MEDIA WHITEWASH
OF "ALLAHU AKBAR"
Jihad Watch director Robert Spencer explains how the media is obfuscating
the true meaning of the phrase "Allahu akbar,"
and why it is irresponsible of them to do so.
Posted by John at 3:44 PM Links to this post

“Palestinian President Mahmoud Abbas, Jordan’s King Abdullah and Egyptian President Abdel Fattah al-Sisi, who all received phone calls from Trump on Tuesday, joined a mounting chorus of voices saying any unilateral U.S. move on Jerusalem could unleash turmoil.”
The U.S. has been kowtowing to this threat for decades. It’s time we stop. Showing that we will not be intimidated by jihad threats is much more likely to make us stronger in the long run than reinforcing the impression that we can be manipulated by promises of violence. The “Palestinians” and their allies are already waging jihad against Israel. This will not change that; it will only become the latest of many pretexts. If it weren’t this that jihadis were outraged over, it would be something else. It is high time we told them that we are going to do what is right, come what may. 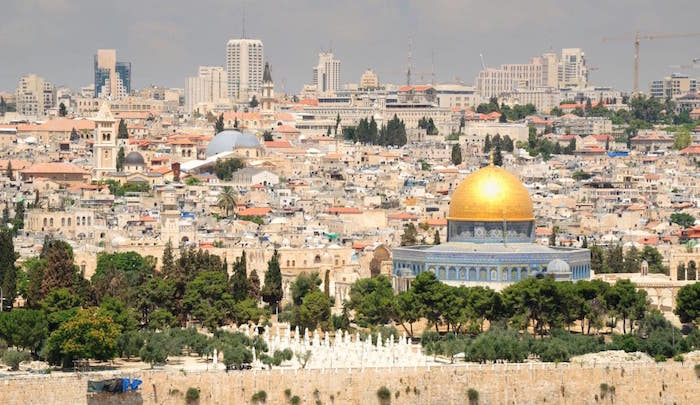 
WASHINGTON/GAZA — President Donald Trump told Arab leaders on Tuesday that he intends to move the U.S. embassy in Israel to Jerusalem, a move that would break with decades of U.S. policy and risks fueling further unrest in the Middle East.
Senior U.S. officials have said Trump is likely on Wednesday to recognize Jerusalem as Israel’s capital while delaying relocating the embassy from Tel Aviv for another six months, though he is expected to order his aides to begin planning such a move immediately.
The officials said, however, that no final decisions have been made. U.S. endorsement of Israel’s claim to all of Jerusalem as its capital would reverse long-standing U.S. policy that the city’s status must be decided in negotiations with the Palestinians, who want East Jerusalem as the capital of their future state. The international community does not recognize Israeli sovereignty over the entire city, home to sites holy to the Muslim, Jewish and Christian religions.
Palestinian President Mahmoud Abbas, Jordan’s King Abdullah and Egyptian President Abdel Fattah al-Sisi, who all received phone calls from Trump on Tuesday, joined a mounting chorus of voices saying any unilateral U.S. move on Jerusalem could unleash turmoil.
Trump notified Abbas “of his intention to move the American Embassy from Tel Aviv to Jerusalem,” Abbas spokesman Nabil Abu Rdainah said. Abbas, in response, “warned of the dangerous consequences such a decision would have to the peace process and to the peace, security and stability of the region and of the world” and also appealed to the pope and the leaders of Russia, France and Jordan to intervene.
The Jordanian monarch told Trump that moving the embassy would have “dangerous repercussions” for the region and would obstruct U.S. efforts to promote Israeli-Palestinian peace talks, according to a palace statement. Egypt’s Sisi cautioned Trump against “taking measures that would undermine the chances of peace” and complicate matters in the Middle East, a presidential statement released in Cairo said.
None of the leaders’ statements said whether Trump, who was also due to talk to Israeli Prime Minister Benjamin Netanyahu, specified the timing of an embassy move.
But U.S. officials, speaking on condition of anonymity, said Trump would sign a national security waiver – as have his predecessors – keeping the embassy in Tel Aviv for another six months but would commit to expediting a move. It was unclear, however, whether he would set a date.
Trump, who promised during the 2016 presidential campaign to move the embassy to Jerusalem and is expected to announce his decision in a speech on Wednesday, appears intent on satisfying the pro-Israel, right-wing base that helped him win the presidency. Israeli Intelligence Minister Israel Katz, who met last week with U.S. officials in Washington, told Israel’s Army Radio: ”My impression is that the president will recognize Jerusalem, the eternal capital of the Jewish people for 3,000 years, as the capital of the state of Israel.”
Asked if Israel was preparing for a wave of violence if Trump recognizes Jerusalem as the Israeli capital, he said: ”We are preparing for every option. Anything like that can always erupt. If Abu Mazen (Palestinian President Mahmoud Abbas) will lead it in that direction then he will be making a big mistake.”
Turkey threatened on Tuesday to cut diplomatic ties with Israel if Trump recognizes Jerusalem. “Mr. Trump, Jerusalem is the red line of Muslims,” Turkey’s President Tayyip Erdogan told a parliamentary meeting of his ruling AK Party.
People and security are seen outside the U.S Embassy in Tel Aviv, Israel, on Tuesday. © Amir Cohen People and security are seen outside the U.S Embassy in Tel Aviv, Israel, on Tuesday.
Senior U.S. officials told Reuters some officers in the State Department were also deeply concerned and the European Union, the Palestinian Authority, Saudi Arabia and the Arab League all warned that any such declaration would have repercussions across the region.
FEARS OF BACKLASH
Netanyahu has so far declined to speculate on what Trump might say. But Katz took to Twitter to reject Turkey’s threat and reiterate Israel’s position on the city, which is one of a long list of stumbling blocks in years of failed peace talks with the Palestinians. “We don’t take orders or accept threats from the president of Turkey,” he wrote.
Two U.S. officials said on condition of anonymity that news of the plan to recognize Jerusalem as Israel’s capital had kicked up resistance from the State Department’s Near Eastern Affairs bureau, which deals with the region.
“Senior (officials) in NEA and a number of ambassadors from the region expressed their deep concern about doing this,” said one official, saying the concerns focused on “security.”
The State Department referred questions to the White House. The White House did not immediately respond to requests for comment. A fourth U.S. official said the consensus U.S. intelligence estimate on U.S. recognition of Jerusalem as Israel’s capital was that it would risk triggering a backlash against Israel, and also potentially against U.S. interests in the Middle East.
It could also derail a fledgling Israeli-Palestinian peace effort led by Trump’s son-in-law and senior adviser, Jared Kushner.
The European Union’s top diplomat, Federica Mogherini, said on Tuesday that “any action that would undermine” peace efforts to create two separate states for the Israelis and the Palestinians “must absolutely be avoided.”…

Saudi King: Moving embassy to Jerusalem
“a flagrant provocation of Muslims,
all over the world”
BY ROBERT SPENCER
SEE: https://www.jihadwatch.org/2017/12/saudi-king-moving-embassy-to-jerusalem-a-flagrant-provocation-of-muslims-all-over-the-world;
And “Palestinian” top dog Mahmoud Abbas “warned of the dangerous consequences such a decision would have to the peace process and to the peace, security and stability of the region and of the world.”
They’re saying, “Don’t do this, or Muslims will kill people.” It’s just the kind of violent intimidation that neither Trump nor any free person should give in to, for doing so will only encourage more of it. 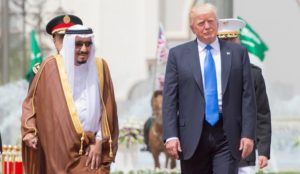 
Arab leaders have warned US President Donald Trump that moving the American embassy in Israel to Jerusalem could have dangerous repercussions.
Mr Trump phoned several regional leaders on Tuesday to tell them he intended to move it from Tel Aviv.
Saudi Arabia’s King Salman told the US leader that any such move would provoke Muslims around the world.
The calls came amid speculation that Mr Trump could recognise Jerusalem as Israel’s capital on Wednesday.
He is scheduled to deliver remarks and White House spokeswoman Sarah Sanders said he was “pretty solid” in his thinking on the issue.
The city’s fate is one of the thorniest issues between Israel and the Palestinians.
If Washington recognises Jerusalem as Israel’s capital, it would be the first country to do so since the foundation of the state in 1948.
King Salman told Mr Trump that the relocation of the embassy or recognition of Jerusalem as Israel’s capital “would constitute a flagrant provocation of Muslims, all over the world”, the official Saudi Press Agency reported.
Meanwhile, US government employees and their families have been barred from personal travel in Jerusalem’s Old City and the West Bank for security reasons ahead of planned protests.
In other reaction from leaders who spoke to Mr Trump:
Palestinian leader Mahmoud Abbas “warned of the dangerous consequences such a decision would have to the peace process and to the peace, security and stability of the region and of the world”
Jordan’s King Abdullah said the decision would “undermine efforts to resume the peace process” and provoke Muslims. Jordan acts as custodian of the Islamic sites in Jerusalem
Egypt’s President Abdul Fattah al-Sisi urged Mr Trump “not to complicate the situation in the region”…

George Soros has funded anti-Israel organizations his entire life, and he would love to see Israel blown off the map in a conflict that he and his socialist army could then blame on President Trump.
Posted by John at 3:39 PM Links to this post