SELLING OUT THE AMERICAN PEOPLE FOR A PRICE

Bagman Boehner Ready to Openly Defy Constitution with FastTrack
Published on Jun 12, 2015
Corporate ownership of Congress and the false dichotomoy of Democrats & Republicans has never been more obvious. Boehner is ready to deliver for his corporate masters with a vote this weekend on Trade Promotion Authority (TPA / FastTrack) as soon as they can put together a temporary welfare package for some of the people who will lose their jobs.

ONLY TPP CAN BE SEEN AND READ BY CONGRESSMEN IN A SECRET ROOM, BUT NOT TISA & TTIP PORTIONS
PUBLIC WILL ONLY SEE CONTENTS AFTER VOTE

to Vote for TPP Fast-Track

SEE: http://www.thenewamerican.com/usnews/congress/item/21040-corporations-bribe-senators-to-vote-for-tpp-fast-track;
EXCERPTS:
"The U.S. Senate is full of men and women who paid for their office and now expect to be paid for using the power they bought. The latest example comes from the vote on granting the president trade-promotion authority (TPA) — power to “fast track” passage of the Trans-Pacific Partnership (TPP).
The Guardian reports that “Fast-tracking the TPP, meaning its passage through Congress without having its contents available for debate or amendments, was only possible after lots of corporate money exchanged hands with senators.”
In other words, senators — each of whom swore an oath to preserve, protect, and defend the Constitution — have been bribed to ignore our founding document and deliver power over the country’s trade policy to the president and globalist bureaucrats who will manage the TPP."

Obama Will Help Congressmen's Campaigns for Yes Votes on Fast-Track

SEE: http://www.thenewamerican.com/usnews/congress/item/21041-obama-will-help-congressmens-campaigns-for-a-yes-votes-on-fast-track;
EXCERPTS:
Flush with funds from multi-national corporations that would benefit from enactment of the TPP, congressmen can now count on help on the campaign trail, too. It's a coup for congressmen and a coup d’etat of the Republic established by the Constitution and the consent of the governed.
It’s not that candidates necessarily want to tie their political hopes to an unpopular president, but they are likely willing to let him serve as a human shield for the fire they’ll likely come under for supporting a secret “trade bill” that they haven’t read, that violates the Constitution, and that forever transforms the fundamental foundation of federalism upon which the country was built.

SEE: http://www.thenewamerican.com/usnews/foreign-policy/item/21049-paul-ryan-s-pelosi-style-freudian-slip-exposes-truth-about-obamatrade;
EXCERPTS:
As we move closer to a House vote on fast-tracking an unholy trinity of super-secret trade agreements — the Trans Pacific Partnership (TPP), the Trade in Service Agreement (TISA), and Transatlantic Trade and Investment Partnership (TTIP), collectively referred to as ObamaTrade — the party line is that there really is nothing to hide in these agreements, despite the fact that these treaties are still being kept very much under wraps. In fact, the secret TISA and TTIP agreements have not been made available for even members of Congress to view them. And the TPP agreement may be seen only by members of Congress who view them in a secret room and agree not to dilvulge the contents.
But of course the plan is to make the TPP and other parts of ObamaTrade public prior to a congressional vote, right? Wrong! And in a classic Freudian slip, House Ways and Means Committee chairman Paul Ryan let the cat out of the bag.
As Breitbart.com noted:
Right now, TiSA and T-TIP text are completely secretive and unavailable for even members of Congress to read while TPP text is available for members to review—although they need to go to a secret room inside the Capitol where only members of Congress and certain staffers high-level security clearances, who can only go when members are present, can read the bill. 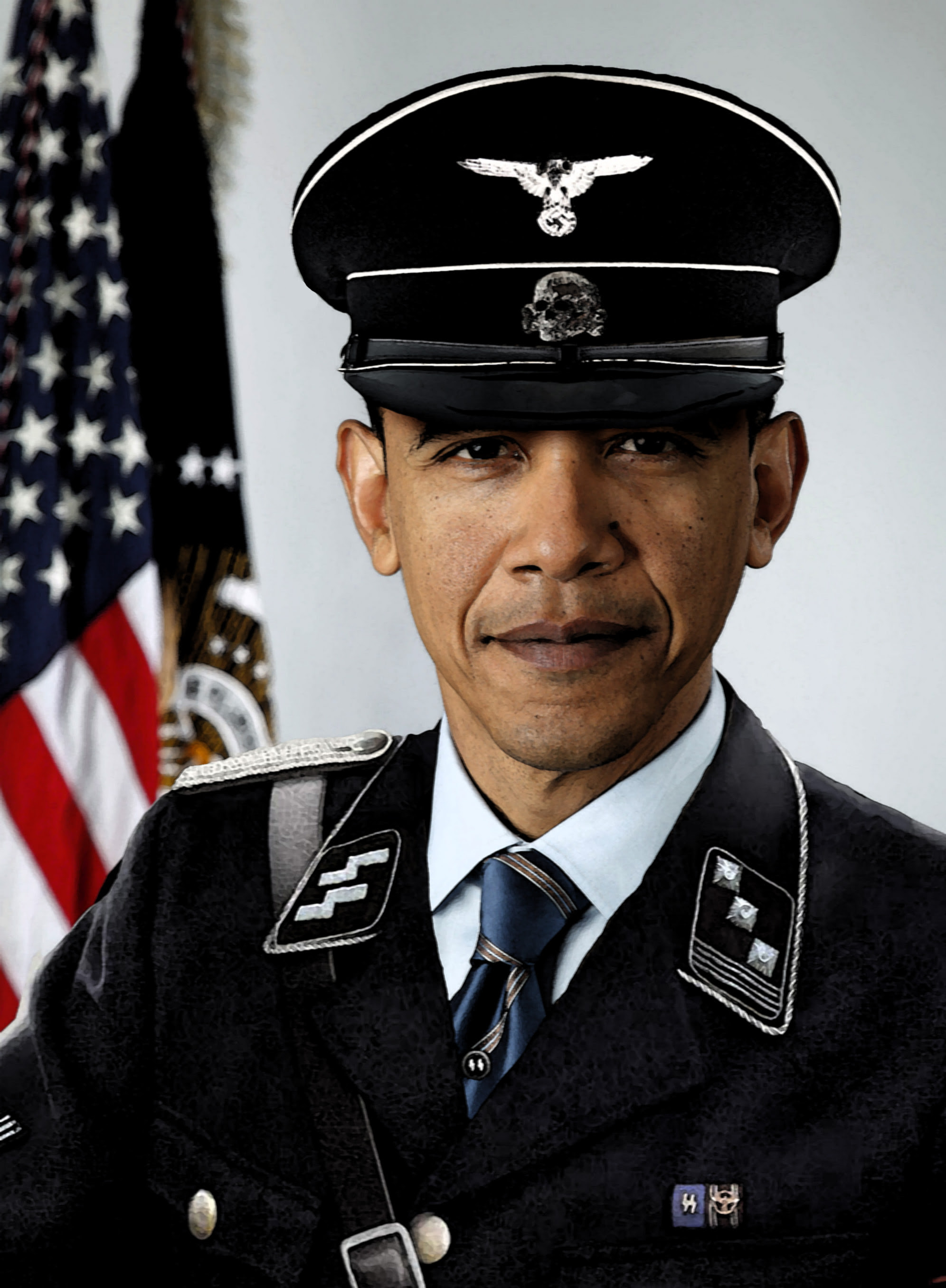 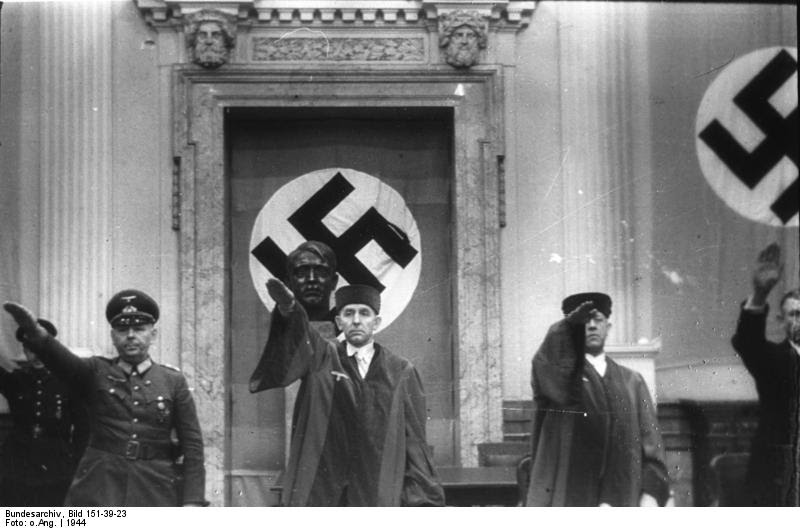 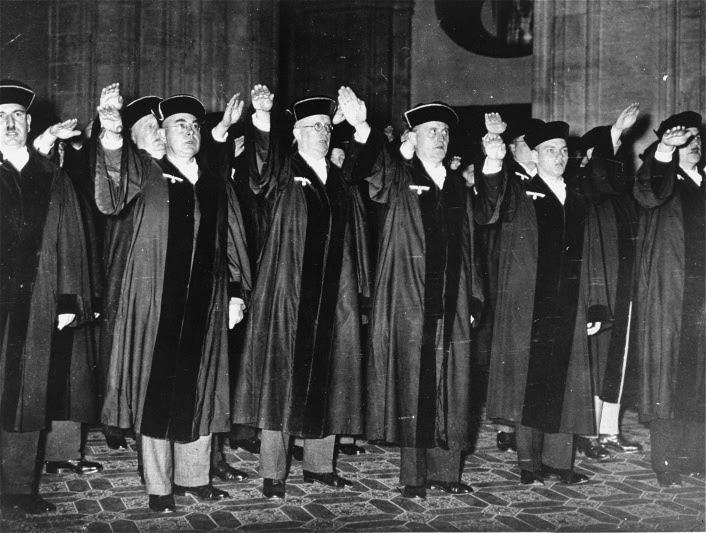 Members of the Berlin criminal court give the Nazi salute on October 1, 1936, the day that judges were required to wear the Nazi eagle-and-swastika emblem on their court robes.

SEE: http://the-trumpet-online.com/obama-lawyers-asked-secret-court-ignore-public-courts-decision-spying/; republished below in full unedited for informational, educational, and research purposes:

The Obama administration has asked a secret surveillance court to ignore a federal court that found bulk surveillance illegal and to once again grant the National Security Agency the power to collect the phone records of millions of Americans for six months.
The legal request, filed nearly four hours after Barack Obama vowed to sign a new law banning precisely the bulk collection he asks the secret court to approve, also suggests that the administration may not necessarily comply with any potential court order demanding that the collection stop.
US officials confirmed last week that they would ask the Foreign Intelligence Surveillance court – better known as the Fisa court, a panel that meets in secret as a step in the surveillance process and thus far has only ever had the government argue before it – to turn the domestic bulk collection spigot back on.
Justice Department national security chief John A Carlin cited a six-month transition period provided in the USA Freedom Act – passed by the Senate last week to ban the bulk collection – as a reason to permit an “orderly transition” of the NSA’s domestic dragnet. Carlin did not address whether the transition clause of the Freedom Act still applies now that a congressional deadlock meant the program shut down on 31 May.
But Carlin asked the Fisa court to set aside a landmark declaration by the second circuit court of appeals. Decided on 7 May, the appeals court ruled that the government had erroneously interpreted the Patriot Act’s authorization of data collection as “relevant” to an ongoing investigation to permit bulk collection.
Carlin, in his filing, wrote that the Patriot Act provision remained “in effect” during the transition period.
“This court may certainly consider ACLU v Clapper as part of its evaluation of the government’s application, but second circuit rulings do not constitute controlling precedent for this court,” Carlin wrote in the 2 June application. Instead, the government asked the court to rely on its own body of once-secret precedent stretching back to 2006, which Carlin called “the better interpretation of the statute”.
The second circuit court of appeals is supposed to bind only the circuit’s lower courts. But the unique nature of the Fisa court – whose rulings practically never became public before whistleblower Edward Snowden’s revelations – has left ambiguous which public court precedents it is obliged to follow.
“While the Fisa court isn’t formally bound by the second circuit’s ruling, it will certainly have to grapple with the second circuit’s interpretation of the ‘relevance’ requirement. The [court] will also have to consider whether Congress effectively adopted the second circuit’s interpretation of the relevance requirement when it passed the USA Freedom Act,” said Jameel Jaffer, the deputy legal director of the ACLU, which brought the lawsuit the second circuit decided.
The second circuit did not issue an injunction stopping the bulk collection. It deferred to the then-ongoing congressional debate over the USA Freedom Act, citing legislation as the more appropriate mode of relief. The ACLU, now confronting a potential return of bulk surveillance via the Fisa court, is considering seeking an injunction in the appropriate federal district court should the Fisa Court grant the government surveillance request.
Yet Carlin’s request to the Fisa court suggested the Obama administration would not consider the second circuit the last word – and might seek to challenge the injunction.

SEE: http://www.thenewamerican.com/usnews/constitution/item/21045-will-obama-ignore-court-decision-against-nsa-spying;
EXCERPTS:
"In response to the government’s motion to continue its surveillance, the conservative Freedom Works group filed a motion before the FISA court, asking it to reject the government’s request as a violation of the Fourth Amendment’s prohibition on unreasonable searches and seizures.
It was the Obama administration, in 2011, that secretly won permission from this FISA court to allow the NSA to intercept e-mails and phone calls on a mass level. This clearly violates the Fourth Amendment prohibition on a warrant being issued, except after probable cause. Probable cause means that a law enforcement official must convince a judge that it is likely that the surveillance or search will reveal evidence of a crime. There is simply no way that the bulk collection of information on millions of Americans would meet this probable cause standard.
Secondly, the Fourth Amendment restricts the search or surveillance by actually naming or listing the thing or things that they expect to find. Again, this “general” search warrant presently used in the NSA phone metadata collection program is certainly beyond the realm of powers allowed under the Fourth Amendment."