OBAMA'S SANITY QUESTIONED BY EXPERTS & OTHERS

OBAMA'S SANITY QUESTIONED BY EXPERTS
Published on Oct 15, 2015
President Obama’s questionable sanity is now not just being noticed by mental health professionals or political activist and Presidential nominee Lyndon Larouche or best selling author and former U.S. State Department official Steve Piecenik. Now an entire country has voiced it's concern. “John Schindler, a security expert and whistleblower who now writes for The Daily Beast, has claimed that a senior EU official from an undisclosed country also inquired about impeachment proceedings, saying that the nation believes Obama is not fit for office.” Schindler tweeted out the revelation Monday "Had a senior EU diplomat, old friend, ask me today, How does your impeachment work? My government believes Obama is quite mentally unwell."

In fact the submissive domesticated Obama supporters at this point have to be suffering varying degrees of psychosis. You would have to be delusional to ignore Obama’s shrouded upbringing by communist muslims. His former identity as Barry Soetero, an Indonesian foreign exchange student with confidential college records that rose to prominence traversing marxist/socialist circles catapulted into the political landscape due to funds provided by unknown foreign backers and NWO strategist George Soros.

Obama has now shown almost all of the cards in his hand after decimating the U.S. military, aiding and abetting the assault of the U.S. constitution, increasing our national debt, creating a healthcare tax to destroy the middle class, engaging in divide and conquer leadership and overseeing the policies and trade deals that serve as a trojan horse for an emerging global Corporacratic Government.

You would have to be mentally ill to oppose prosperity. Humanity has an unlimited potential. Massively overshadowing the potential of the NWO beast’s technocratic eugenics plan. Our sovereign individual national identities have to be maintained and developed. It is only through this method of human innovation that all of our greatest and sanest achievements have been attained.

Is Obama Mentally Ill? Experts Weigh In
Published on Oct 15, 2015
Former NSA analyst says senior European official asked him how US President could be impeached.

Posted by John at 5:25 PM Links to this post

BUREAUCRACIES NOW MILITARIZING
TO TAKE PROPERTY & RIGHTS
Published on Oct 14, 2015
David Knight talks with Lee Ann McAdoo and Joe Biggs about a new story where the BLM is coming after a Texas rancher trying to steal his land.
THE ABUSE OF THE EPA & BLM ON LAND OWNERS, ETC.

Posted by John at 5:09 PM Links to this post

BERNIE SANDERS WANTS A SOCIALIST DICTATORSHIP IN AMERICA, OR BETTER YET, MOB RULE BY "SOCIALIST DEMOCRACY" TO REPLACE OUR REPRESENTATIVE REPUBLIC

Socialist Sanders Wants to Give You "Free" Everything
by Increasing Taxes on the "Rich" 0.1% Who He Claims Owns 90% of the Wealth of the U.S.

WANTS A "SOCIALIST DEMOCRACY" OR IN OTHER WORDS, A COMMUNIST DICTATORSHIP WITH MOB RULE,
WHERE YOUR CONSTITUTIONAL RIGHTS ARE GONE FOR GOOD;
THINKS SOCIALIZED MEDICINE WORKS FOR OTHER COUNTRIES
NO IT DOESN'T! 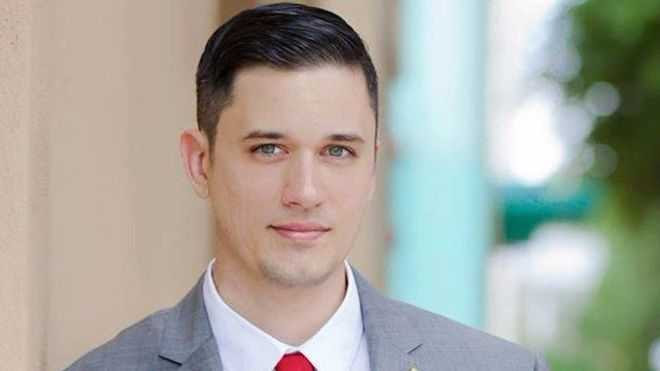 ORLANDO, Fla. — A U.S. Senate candidate in Florida is raising eyebrows after he admitted to sacrificing a goat and drinking its blood two years ago as part of a pagan ritual.
Augustus Sol Invictus, 32, is a candidate for Marco Rubio’s seat under the Libertarian Party and also works as an attorney.
His moniker means “majestic unconquered sun,” similar to the sun god that was worshiped in the Roman empire in the first few hundred years following Christ’s death and resurrection. However, reports state that he chose the name in following Thelema, a philosophy created by Satanist Alestair Crowley. Invictus’ real name is not known.
This week, Invictus admitted to reporters that in 2013, he walked to the Mojave Desert from Orlando and spent a week there fasting. After his return, he killed a goat and drank its blood to give thanks for surviving the journey.
“I did sacrifice a goat. I know that’s probably a quibble in the mind of most Americans,” Invictus told the Associated Press. “I sacrificed an animal to the god of the wilderness. … Yes, I drank the goat’s blood.”
The Daily Beast also notes that in a letter he wrote he wrote that year, Invictus renounced his U.S. citizenship, his part in the Roman Catholic Church, his legal license, and all of his physical possessions.
“To those who believe that this great renunciation is evidence of mental illness rather than the initiation of a spiritual journey: If my example stirs nothing in you, if you can see no further than the confines of what your secular humanism & its hallowed psychiatry allow, then there is nothing I can say to you that would wake you from your slumber,” he wrote. “You are less than the beast in man. You are fungi. Would to God that you pass quickly from this Earth.”
He said that he was going to the desert to prepare for a civil war.
“I have prophesied for years that I was born for a Great War; that if I did not witness the coming of the Second American Civil War I would begin it myself. Mark well: That day is fast coming upon you. On the New Moon of May, I shall disappear into the Wilderness. I will return bearing Revolution, or I will not return at all,” Invictus wrote.
The Senate candidate told reporters that he doesn’t “go on [his] lunch break and start hacking chickens to death,” but is an avowed pagan.
If elected, he said that he wants to tackle issues such as immigration, the federal budget and U.S. intervention in foreign countries. Libertarian Party Chairman Adrian Wyllie resigned last Thursday due to disagreements with Invictus’ candidacy. Invictus has remarked that Wyllie’s vocal opposition has been just to “smear” his campaign.
_______________________________________________________
FROM WIKIPEDIA: https://en.wikipedia.org/wiki/Augustus_Sol_Invictus
"In response to Invictus' campaign, the now former chairman Adrian Wyllie of the Libertarian Party of Florida resigned from his position, calling Invictus a "violent Fascist and Neo-Nazi" whose ideology was incompatible with libertarianism and saying he did not want to be part of the same party. The chairman also accused Invictus of wanting to start a second civil war in America, and of supporting eugenics. Invictus responded by admitting he once wrote a paper advocating eugenics but has since changed his mind.
In 2013 Invictus said that he expected and might start a "Second American Civil War", and he has issued a call for "total insurrection", saying to his followers:

Posted by John at 4:39 PM Links to this post