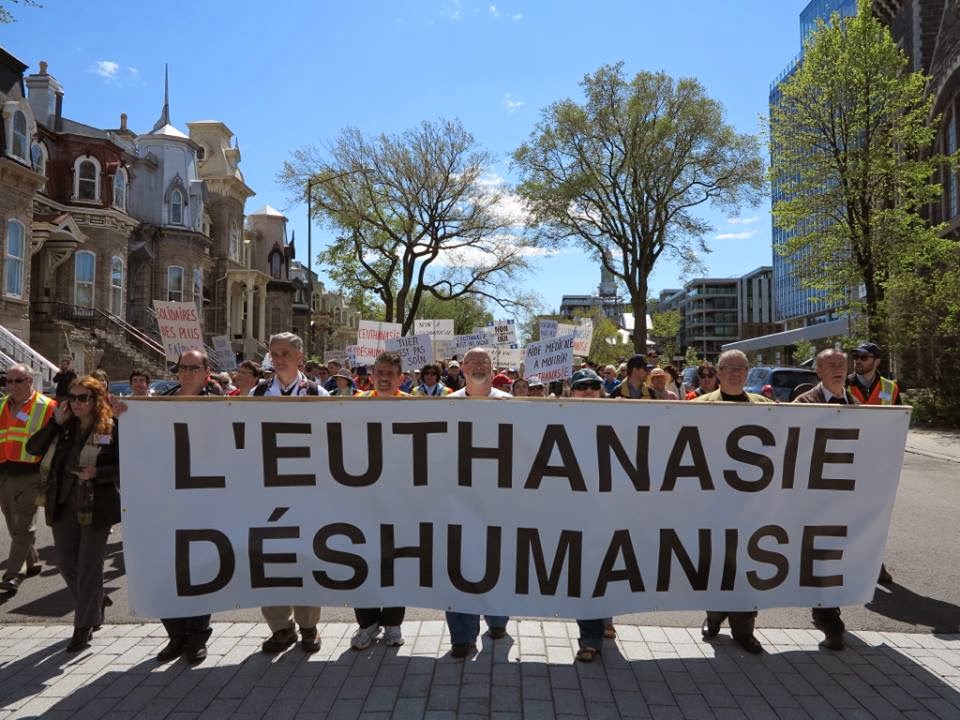 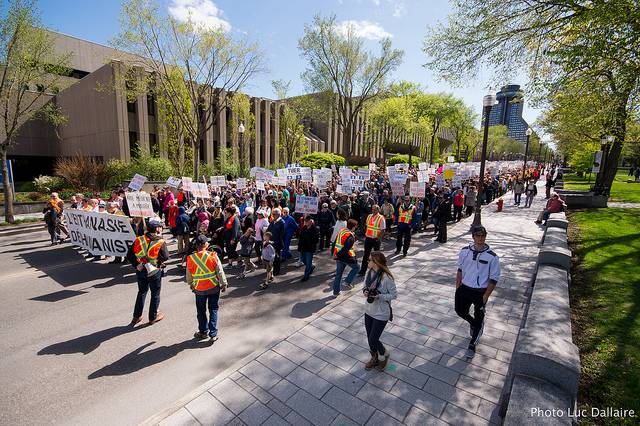 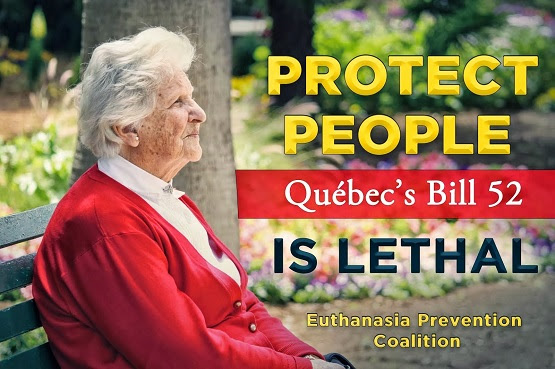 Following a Free Vote at the National Assembly;

as Quebec votes to legalize euthanasia

Véronique Hivon, the PQ MNA who had pushed for the legislation as junior health minister
and co-sponsored its re-introduction after the PQ was defeated in April,
was applauded like a superstar by her colleagues
SEE: http://fullcomment.nationalpost.com/2014/06/05/graeme-hamilton-air-think-with-self-congratulation-as-quebec-votes-to-legalize-euthanasia/

QUEBEC -- Quebec's landmark right-to-die bill has been adopted following a free vote at the national assembly.
Bill 52 passed on Thursday afternoon by a 94-22 margin, with no abstentions.
The legislation is officially dubbed "an act respecting end-of-life care."
Bill 52 stipulates that patients themselves would have to repeatedly ask a doctor to end their lives on the basis of unbearable physical or psychological suffering. They would have to be deemed mentally sound at the time of the requests.
The federal government has said it could challenge the legality of the legislation.
SEE:
http://www.lifenews.com/2014/05/26/canadian-government-opposes-bill-to-legalize-euthanasia-in-quebec/
Assisted suicide and euthanasia are illegal under Canada's Criminal Code and Ottawa has insisted it has no intention of changing that.
Related Stories
• Group threatens to challenge Quebec's Dying with Dignity law
• Quebec's Liberal caucus torn over 'dying with dignity'
• Controversial dying with dignity legislation tabled in Quebec
© The Canadian Press, 2014
http://globalnews.ca/news/1377028/que...
SEE VIDEO:
https://www.youtube.com/watch?v=ipYO01n28ys

Posted by John at 4:18 PM Links to this post

RIVETING INTERVIEW WITH LEAD ATTORNEY SUSAN BURKE ON CIVIL SUIT APPEAL & SOVEREIGN GRACE MINISTRIES CONSPIRACY
SEE: http://www.brentdetwiler.com/brentdetwilercom/riveting-interview-with-lead-attorney-susan-burke-on-civil-s.html
Republished below in full unedited for informational, educational, and research purposes:
Janet Mefferd interviewed Susan Burke on her show today.  Ms. Burke is the lead attorney for the Victims-Plaintiffs in the civil lawsuit against C.J. Mahaney, Covenant Life Church, Sovereign Grace Ministries, and others.
Anyone interested in the truth will take this interview to heart. There is no question of a conspiracy to cover up sexual abuse.
Please pray for the Maryland Court of Special Appeals who hears the appeal on Monday. Let's hope they overturn the decision of the lower court that dismissed the case in May 2013 based upon the statute of limitations.
Regardless of their decision, however, Mahaney, CLC and SGM are guilty of an evil conspiracy per the evidence. They did not report Nathaniel Morales (and others) who was a known serial predator. He went on to abuse for 20 years.
Two weeks ago in his first trial, Morales was found guilty on all five counts with a maximum sentence of 85 years. The follwoing week in his second trial, Morales was found guilty on two counts for another 25 years.
The evangelical and Reformed Church must act. This is no time for silence. Leaders everywhere should speak out and demand an accounting of Mahaney, et al. regardless of the criminal or civil proceedings.
The same is true for the SGM Leadership Team which is led by Executive Director, Mark Prater.  These men have covered up for Mahaney.  They must finally come clean and call him to account for past actions and his role in the conspiracy.
The Church does not have the power to incarcerate but it does have the authority to discipline. Will the pastors of Sovereign Grace Ministries exercise church discipline or refuse to follow their own polity? Will Mickey Connolly, the Regional Leader over Mahaney's church in Louisville and close friend, continue to shield Mahaney?
The same is true for the pastoral staff at Sovereign Grace Church of Louisville.  Will Bob Kauflin, Jeff Purswell, Brian Chesemore (son-in-law) and Gary Ricucci (alleged co-conspirator) continue to enable Mahaney and refuse to discipline him?
Or will noted evangelical leaders in The Gospel Coalition and Together for the Gospel continue to defend Mahaney?
God forbid all these things!
This is a very serious matter.  We must work together to make sure pastors throughout America report the suspicion of sexual abuse.
This did not happen as a rule in Sovereign Grace Ministries for 30 years.  As a result, there are scores of victims and there has been an extensive attempt to cover this up.  Those are the facts.
Please listen to this 13 minute interview during minutes 7:08-19:42 on audio recording.
_______________________________________________________

Published on May 21, 2014
Tullian Tchividjian talks with Janet Mefferd about his departure from The Gospel Coalition and his thoughts on the Sovereign Grace Ministries child sex-abuse scandal.
https://www.youtube.com/watch?v=8iuCm42I6jg

On Sunday, May 18, Covenant Life Church Pastor Joshua Harris spoke to his congregation about the recent criminal conviction of Nathaniel Morales, a former CLC youth leader found guilty of sexually abusing three boys. Harris also spoke about offering to take an administrative leave and even said he was willing to resign entirely so the church could deal with the fallout from the scandal amid the looming Sovereign Grace Ministries sexual-abuse class-action lawsuit, set for an appeals hearing on June 9, 2014. Janet offers her thoughts on Harris’ remarks and the latest developments in what she calls American Evangelicalism’s biggest sex scandal to date.
YOUTUBE VIDEO (AUDIO ONLY)

Posted by John at 3:19 PM Links to this post

WHAT GAY MARRIAGE DID TO MASSACHUSETTS

From Brian Camenker of Mass Resistance http://www.massresistance.org/:
The consequences of homosexual marriage: Most people have no idea what REALLY happens when “gay marriage” is imposed. This information-packed video from MassResistance gives you the extremely disturbing truth about what happened in Massachusetts.

Posted by John at 2:27 PM Links to this post