VERMONT: MUSLIM ATTACKS 73 YEAR OLD "MEALS ON WHEELS" VOLUNTEER WITH MACHETE, SMASHES CAR WINDOWS
BY ROBERT SPENCER
SEE: https://www.jihadwatch.org/2018/01/vermont-muslim-attacks-73-year-old-meals-on-wheels-volunteer-with-machete-smashes-car-windows;
Diversity and multiculturalism in Bernie Sanders’ backyard.
No doubt there will come reports claiming that Abukar Ibrahim is mentally ill, etc. But randomly attacking elderly people with a machete is something we have seen from Islamic jihadists before. 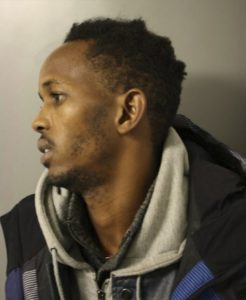 
SHELBURNE, Vt. (WCAX) A Burlington man faces attempted murder charges after allegedly attacking a woman with a machete.
“It’s pretty scary yes,” said Carl Mcmahon.
Mcmahon is staying at Harbor Place in Shelburne. Harbor Place provides temporary emergency housing with services, run by the Champlain Housing Trust. Early Friday, police responded to calls of a man with a knife smashing out car windows.
“On arrival we found that this person who was reported to have a knife, had actually attacked an elderly female,” said Corporal Jon Marcoux of Shelburne Police.
That female, was a 73-year-old Meals on Wheels volunteer who was dropping off meals on the regular route. It is unclear what provoked the attack, but police say 32-year-old Abukar Ibrahim was the one with a machete. He attacked the woman who sustained multiple injuries. She was sent to the hospital, and later released.
“He barricaded himself in the room. After two and a half hours, he came out on his own,” said Marcoux….
“I feel not safe,” said Mcmahon.
Ibrahim is scheduled to be arraigned on Monday, on the charge of attempted murder. He is being held at the Chittenden Regional Correctional Facility.

PRESIDENT TRUMP'S POWERFUL SPEECH
AT WHITE HOUSE
Posted by John at 9:21 AM