Canaanite Idol ‘Moloch’ Put on Display in Rome With Approval from Vatican. Statue of ancient god of child sacrifice
put on display in Rome 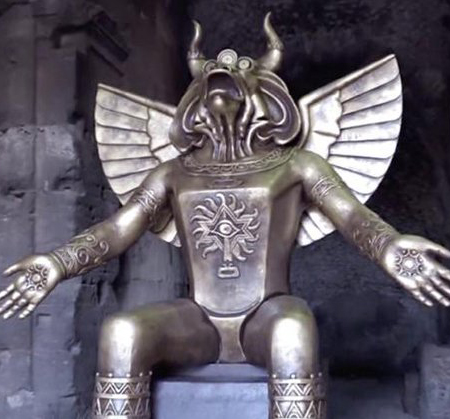 VATICAN PLACES STATUE OF MOLOCH, ANCIENT GOD OF CHILD SACRIFICE, ON DISPLAY IN ROMAN COLOSSEUM, SITE OF CHRISTIAN MARTYRDOM
SEE: https://www.lighthousetrailsresearch.com/newsletters/2019/newsletter20191112.htm; republished below in full unedited for informational, educational and research purposes:
Photo of the actual statue in Rome (ABOVE)

LTRJ Note: We are posting two different articles of the same news story to provide two perspectives. We are posting these articles for informational and research purposes and not as an endorsement of the sources.

By Lifesite News
ROME, November 6, 2019 (LifeSiteNews) – A reconstruction of a pagan idol who demanded child sacrifice was stationed at the entrance of Rome’s Colosseum as part of a secular historical exhibition.
The presence of the idol raised particular concern among Catholics, as it was erected nine days before the Amazon Synod and the subsequent scandal over the veneration of the Pachamama idol at the Vatican.
The statue of Moloch, worshipped by both the Canaanites and the Phoenicians, is part of an exhibit dedicated to Ancient Rome’s once-great rival, the city of Carthage. The large-scale exhibition, titled Carthago: The immortal myth, runs until March 29, 2020. Click here to continue reading.

By European Union Times
Without a doubt, it truly is an abomination that a gigantic statue of Molech is now standing right at the entrance of the Colosseum where so many Christians were brutally slaughtered by the Romans. So look at what the new Italian leftist-globalist government is now up to after they kicked Matteo Salvini from power. Can you believe this!?
Tourists that visit the Colosseum in Rome these days are getting quite a shock.
A gigantic statue of a pagan Canaanite deity known as “Molech” has been erected right at the entrance. In ancient times, those that served Molech would literally sacrifice their children to him, and apparently this involved burning them to death. . . . A source close to the matter told Breaking Israel News that: “There is no way that such a thing could be done without direct permission from the highest levels of the Vatican.

And now a massive statue of this pagan idol is the centerpiece of a new “archaeological exhibition” at the world famous Roman Colosseum. Yes, the exact same Colosseum where countless numbers of Christians were martyred for their faith is now the home for one of the most monstrous pagan deities that the world has ever seen.
I know that this sounds almost too strange to be true, but this is actually happening. The following comes from the official press release for this “exhibition”…
A reconstruction of the terrible deity Moloch, linked to Phoenician and Carthaginian religions and featured in the 1914 film Cabiria (directed by Giovanni Pastore and written by Gabriele D’Annunzio) will be stationed at the entrance to the Colosseum to welcome visitors to the exhibition.
They are referring to this enormous statue as “Moloch”, but according to Wikipedia this ancient pagan god was also known as “Molech, Milcom, or Malcam”…
Moloch[a] is the biblical name of a Canaanite god associated with child sacrifice, through fire or war. The name of this deity is also sometimes spelled Molech, Milcom, or Malcam.
For purposes of this article, I will use the name “Molech”, because that is the name that will be most familiar to the majority of my readers.
The organizers of this “exhibition” could have chosen to put Molech in a dark corner where nobody would have really noticed him, but instead they purposely decided to feature him in a place where 100 percent of the visitors to the Colosseum would immediately see him.
One woman that recently visited the Colosseum told LifeSiteNews what she witnessed…
“We were so excited the day we decided to go to the Colosseum,” Alexandra Clark told LifeSiteNews via email. She and her sister Tiffany were looking forward to visiting the site of Christian martyrdom.
“But the moment we got there the sight that greeted us was horrifying! Standing guard over the entrance was the colossal pagan statue of Moloch. It was placed in that prime spot so that everyone that entered into the Colosseum had to pass it,” she continued.
How in the world could something like this possibly be allowed?
And what makes this even more shocking is that the Colosseum is actually controlled by the Vatican. The following comes from Breaking Israel News…
A source close to the matter told Breaking Israel News that: “There is no way that such a thing could be done without direct permission from the highest levels of the Vatican. The Colloseum of Rome is owned by the Vatican, and specifically the Diocese of Rome, also called the Holy See. If anyone wants to do anything there, they must get permissions from the office of the Diocese of Rome. This exhibition, called “Cathargo: the immortal myth” could not be held there at all unless permissions were granted at high levels.” 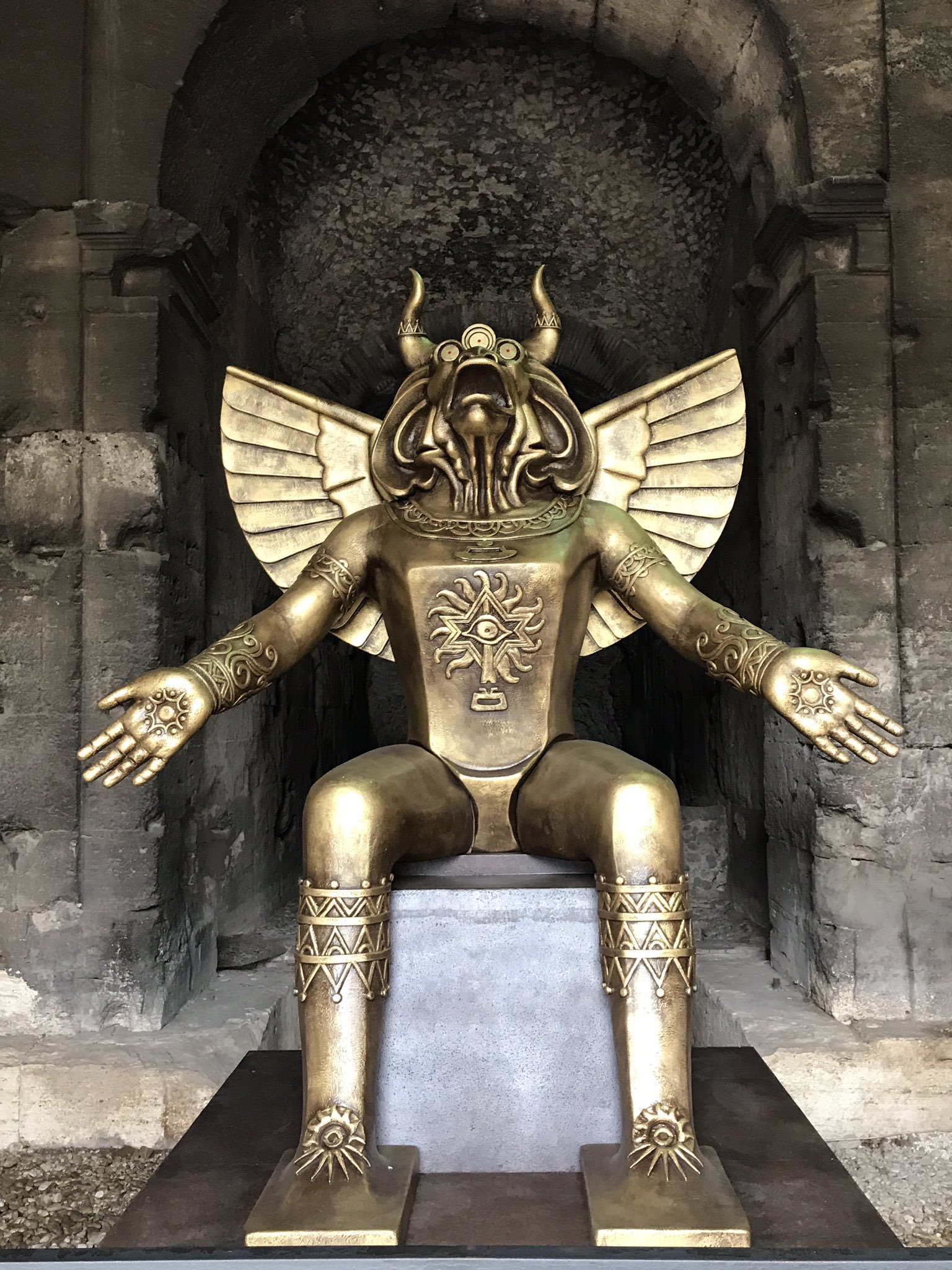 Well we told you numerous times in our previous articles that this pope is Satan himself. We nicknamed him Pope Satan. Just do a search on our website for “Pope Satan”.
This isn’t just some random ancient deity. In Leviticus 18:21, the people of Israel are specifically warned against sacrificing their children to this monstrous idol…
And thou shalt not let any of thy seed pass through the fire to Molech, neither shalt thou profane the name of thy God: I am the Lord.
And in Jeremiah 32:35, we are told that this is precisely what many of the people of Israel ended up doing as they fell away from the Lord…
And they built the high places of Baal, which are in the valley of the son of Hinnom, to cause their sons and their daughters to pass through the fire unto Molech; which I commanded them not, neither came it into my mind, that they should do this abomination, to cause Judah to sin.
Why in the world would anyone think that such practices are something worth celebrating?
According to the Christian Apologetics & Research Ministry, the way that these babies would be killed was truly horrific…
The ancients would heat this idol up with fire until it was glowing, then they would take their newborn babies, place them on the arms of the idol, and watch them burn to death. I can’t help but compare today’s abortion massacre to the sacrifice of children by these ancient pagans. In both, innocent life is destroyed for the gain of the parent.
Over the past few years, there seems to have been a concerted effort to put up symbols from ancient pagan religions in the Middle East in key locations all over the globe. This includes erecting the “arch of Baal” in both Washington D.C. and New York City.
But unlike some of those other “”exhibitions”, this one is going to last a whole lot longer than just a few days.
In fact, we are being told that this statue of Molech will remain standing at the Colosseum in Rome until March 29, 2020…
The statue of Moloch, worshipped by both the Canaanites and the Phoenicians, is part of an exhibit dedicated to Ancient Rome’s once-great rival, the city of Carthage. The large-scale exhibition, titled Carthago: The immortal myth, runs until March 29, 2020.
That is almost five months from now.
Interestingly, Rome was just hit by a magnitude 4.4 earthquake. It is extremely unusual for such a large quake to happen there, and it really shook a lot of people up.
I have no idea if there is any connection, but I felt that it was noteworthy enough to share with all of you.
Without a doubt, it truly is an abomination that a gigantic statue of Molech is now standing right at the entrance of the Colosseum where so many Christians were brutally slaughtered by the Romans.
Unfortunately, not many people are talking about this story, and even fewer are getting upset about it.
So as you can see Satanism is growing stronger than ever before and open worship of Satan is now being displayed in public by the scumbag politicians who lead over us. Truly these are the final times I tell onto you brothers and sisters.
A few hundred years ago they would have been burned alive at the stake for even mentioning the word Satan now they openly praise him and raise statues to him. The world is openly praising evil…
Normally we would give you an advice now on what to do but unfortunately there’s no more advice, everything will collapse with our without our fixes, patches and solutions… just pray to God and as an Italian make sure you vote for Salvini and League when the time comes.
Source
____________________________________________________________