Trump’s Pick Could End the Fed

Published on Nov 30, 2016
Now is not the time to go to sleep. Trump’s cabinet picks — the good, bad, the ugly — could make America great, or let the establish co-opt the new administration. On Monday, Trump interviewed a former CEO of regional bank BB&T & member of Cato Institute’s Board of Directors. Hopefully, Trump will pick Allison, but even if he doesn’t, Allison deserves to be heard. Here’s a sample of what he said...

Posted by John at 4:03 PM Links to this post

TEXAS ELECTOR TO RESIGN RATHER THAN VOTE TRUMP: "I DO NOT SEE HOW DONALD TRUMP IS BIBLICALLY QUALIFIED"

RECRUITED AS AN ELECTOR PRECISELY TO VOTE AGAINST TRUMP
ALLEGED "CHRISTIAN" & ELECTORAL COLLEGE TRADITIONALIST:
TRAITOR FROM AT LEAST 2010

SEE: http://www.politico.com/magazine/thepeoplewhopickthepresident/2016/the-electoral-college-traditionalists;
EXCERPT: "Art Sisneros had a plan when he signed up to be a Republican elector from Texas: “causing chaos.” A self-described member of the “liberty movement,” Sisneros says he was recruited precisely to cast his electoral vote against Donald Trump. He told POLITICO he considered casting his electors vote for Trump’s running mate Mike Pence, a creative way to subvert the process while still fulfilling the oath he took to support the “Trump-Pence” ticket. But he shelved the plan when other like-minded elector candidates failed to win GOP seats. Part of his effort, he said, was to highlight the fact that the Electoral College has been reduced to “rubber-stamping” the popular vote rather than its original intent: the body constitutionally charged with selecting presidential candidates in the first place." 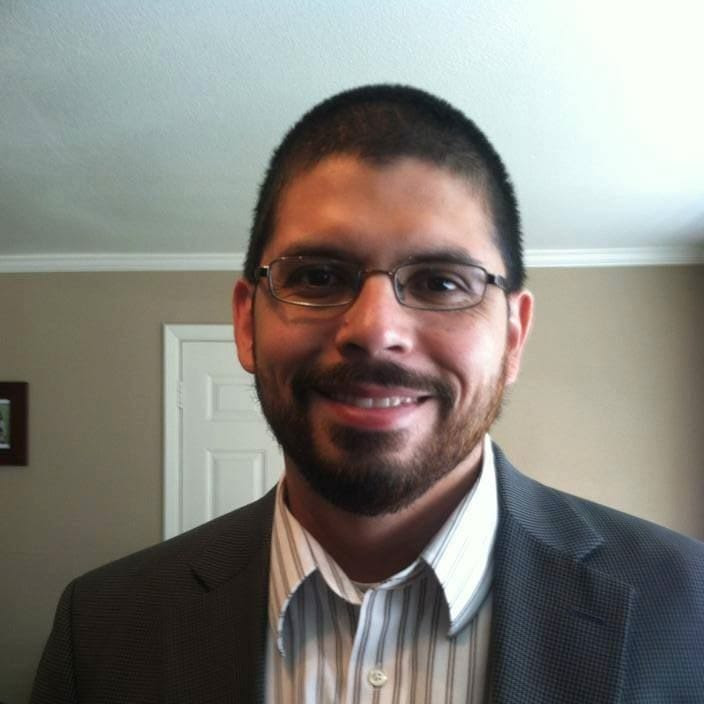 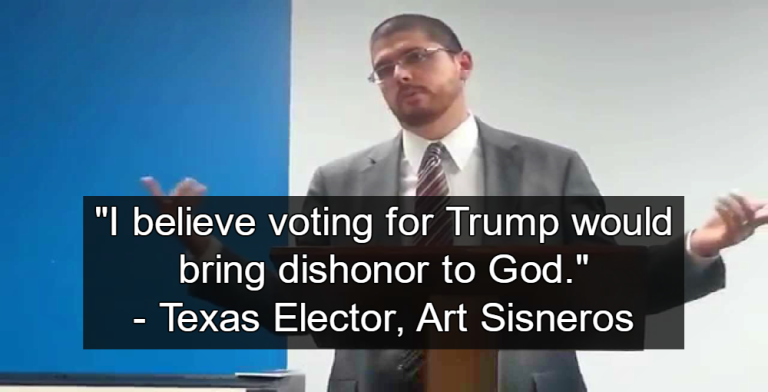 TEXAS ELECTOR TO RESIGN
RATHER THAN VOTE TRUMP:
"I DO NOT SEE HOW DONALD TRUMP IS BIBLICALLY QUALIFIED"
SEE: https://theblessedpath.com/2016/11/26/conflicted-elector-in-a-corrupt-college/
EXCERPT:
"If Trump is not qualified and my role, both morally and historically, as an elected official is to vote my conscience, then I can not and will not vote for Donald Trump for President. I believe voting for Trump would bring dishonor to God. The reality is Trump will be our President, no matter what my decision is. Many are furious that I am willing to have this discussion publicly. Personally, I wish more civil officers would be honest about their convictions. Assuming a Trump Presidency is their ultimate goal, they will get that. The problem is, that isn’t what they want. They want a democracy. They will threaten to kill anyone who challenges their power to vote for Skittles for dinner. That is evidence alone to prove that our republic is lost. The shell may remain, but in the hearts of the people and functionality of the system our republic is gone. I also believe that a pledge is a man’s word that he will follow through on something he committed to. God’s Word is clear we should all “let our ‘yes’ be ‘yes’ and our ‘no,’s ‘no.”[20] I believe to resign is to honor the intent of the pledge as it relates to the people of my district. Since I can’t in good conscience vote for Donald Trump, and yet have sinfully made a pledge that I would, the best option I see at this time is to resign my position as an Elector."
BY HEATHER CLARK
SEE: http://christiannews.net/2016/11/29/texas-elector-to-resign-rather-than-vote-trump-i-do-not-see-how-donald-trump-is-biblically-qualified/; republished below in full unedited for informational, educational, and research purposes:

DAYTON, Texas — An elector in Texas has announced that he has chosen to resign his position rather than vote for Donald Trump as an electorate.
“I do not see how Donald Trump is biblically qualified to serve in the office of the presidency,” Art Sisneros wrote on Saturday in his blog “The Blessed Path: Delighting in the Law of the Lord.” “Of the hundreds of angry messages that I have received, not one has made a convincing case from Scripture otherwise. If Trump is not qualified and my role, both morally and historically, as an elected official is to vote my conscience, then I cannot and will not vote for Donald Trump for president.”
Sisneros had also outlined earlier this month that he does not believe in voting for the lesser of two evils, and pointed to the biblical qualifications for rulers as outlined in Exodus 18:21, 2 Samuel 23:3 and Deuteronomy 1:13.
“God has given us a standard for our civil rulers. They are to be men that fear Him and are to rule justly according His law. This has implications for both the rulers and those choosing them,” he wrote. “The Bible knows nothing of situational ethics; God and His Word do not change. If God tells us we must choose (vote for) a righteous man that fears Him, we are not free to attach an ‘unless’ to the end of that command.”
According to reports, Sisneros had previously been considering being a “faithless elector” after expressing objection to Trump, meaning that he would not cast his vote for Trump despite the candidate’s victory in the state. But he recalled that he had signed a pledge that he would vote for the winner, and regretted doing so, stating that it is “immoral” and “unlawful” that the GOP makes electors sign such an agreement.
“I was wrong in signing this pledge and not communicating to the body when I ran that my conscience would not be bound by it,” Sisneros wrote. “I honestly did not have the convictions about the original purpose of the Electoral College or the biblical qualifications until after I was an elector. The Bible calls this a rash oath and warns against making them.”
“The heart of this issue now is, does honoring the pledge cause me to sin? If it does, then I am obligated not to honor it. If it doesn’t, then I am obligated to honor it,” he said.
Sisneros concluded that the best choice would be to resign since he has objections to the way the Electoral College is run, and believes that it would be dishonoring to God for him to vote for Trump.
“Since I can’t in good conscience vote for Donald Trump, and yet have sinfully made a pledge that I would, the best option I see at this time is to resign my position as an elector. This will allow the remaining body of electors to fill my vacancy when they convene on Dec 19 with someone that can vote for Trump,” he wrote. “The people will get their vote. They will get their Skittles for dinner. I will sleep well at night knowing I neither gave in to their demands nor caved to my convictions. I will also mourn the loss of our republic.”
Posted by John at 1:13 PM Links to this post

SURVEILLANCE STATE ON STEROIDS BEGINNING DECEMBER FIRST
Published on Nov 28, 2016
On December first, 2016 the Spy State will slip a 4th Amendment violating procedure into the Federal Rules of Criminal Procedure. Notice the term procedure. According to an article released by the Electronic Frontier Foundation back in April “the amendment to Rule 41 isn’t procedural at all. It creates new avenues for government hacking that were never approved by Congress.

The proposal would grant a judge the ability to issue a warrant to remotely access, search, seize, or copy data when “the district where the media or information is located has been concealed through technological means” or when the media are on protected computers that have been “damaged without authorization and are located in five or more districts.” It would grant this authority to any judge in any district where activities related to the crime may have occurred. The first part of this change would grant authority to practically any judge to issue a search warrant to remotely access, seize, or copy data relevant to a crime when a computer was using privacy-protective tools to safeguard one's location.”

All of those using a vpn service or those denying GPS location of their devices through a map app for example are subject to be implicated by the little known procedural amendment. And while Federal Hackers are hacking your device or computer with malware, malicious hackers with far better experience hacking bot net devices will be hacking the Federal government. Causing any and all of your private data to be exposed simply because you were exercising your right to privacy. Which is apparently a crime now. And all of it done with zero public debate.

FORMER GENERAL PETRAEUS WILL BETRAY US: TRUMP CONSIDERING THIS BILDERBERG GLOBALIST FOR SECRETARY OF STATE
Published on Nov 29, 2016
After Trump voters appealed to Trump NOT to select Romney as Sec of State, Trump met with General Petraeus today as Trump’s team said he was a strong contender for the position. Trump needs to hear quickly from his supporters about this globalist successor to Kissinger & Brzezinski.
SEE:


Gen. Petraeus Reveals 'North American Union' Progress
Published on Jun 30, 2014
JBS CEO Art Thompson's weekly news video update for June 30 - July 6, 2014. In this week's analysis behind the news video, JBS CEO Art Thompson discusses how Gen. Petraeus is openly revealing just how far along we've progressed regarding the merger of the United States with Mexico and Canada to form the North American Union; how contradictory U.S. policy appears to be in the Mideast; and how the Christians in the Mideast have been the big losers from U.S. military and diplomatic intervention in Iraq and other Mideast countries.

SEE ALSO:
http://www.infowars.com/david-petraeus-at-bilderberg-to-craft-big-data-spy-grid/;
EXCERPT: "Former CIA Director David Petraeus is in attendance at the 2013 Bilderberg Group conference to help construct the “big data” spy grid, which is set to become the new frontier of clandestine statecraft as Internet connectivity becomes ubiquitous." "Petraeus had previously hailed the “Internet of things” as a transformational boon for “clandestine trade craft”. In other words, it will soon be easier than ever before to keep tabs on the population since everything they use will be connected to the web, with total disregard for privacy considerations. The spooks won’t have to plant a bug in your home or your vehicle, you will be doing it for them." (through your dishwasher).
SEE ALSO: https://www.wired.com/2012/03/petraeus-tv-remote/
SEE ALSO: http://www.infowars.com/convicted-criminal-david-petraeus-to-represent-us-at-bilderberg/;
EXCERPT:
THE OTHER, OTHER WOMAN:
Petraeus with Paula Broadwell in July 2011.
SEE: https://en.wikipedia.org/wiki/David_Petraeus 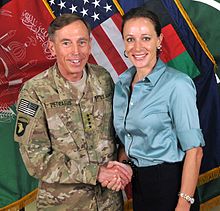 "In April former CIA director and retired general David Petraeus pleaded guilty to a misdemeanor charge of handing over classified information to his mistress and biographer, Paula Broadwell. He was sentenced to two years probation and a $100,000 fine. Petraeus had passed on several 5-by-8 inch black notebooks containing classified information to Broadwell. Despite his conviction, the former general remains a trusted adviser to the White House on its strategy in Iraq."

Posted by John at 9:04 AM Links to this post