ALEX JONES’ OFFICIAL STATEMENT ON ROKU BAN AND SANDY HOOK~STREAMING APP LATEST TO JUMP ON CENSORSHIP TRAIN
SEE: https://www.infowars.com/alex-jones-official-statement-on-roku-ban-and-sandy-hook/;
Jones clears the record after hundreds of media outlets simultaneously released articles about the removal, but most of them got the story completely wrong.
In a Washington Post article about the ban they claim, “Roku even heard from lawyers representing the families of Sandy Hook victims, who say they continue to be threatened and harassed thanks to the Infowars-spread conspiracy theory that the 2012 massacre that killed 27 people, including 20 children, didn’t happen.”
WAPO continued, saying, “What might have been the final push, however, came from the lawyers representing the families of the Sandy Hook victims who are suing Jones. Last week, a Connecticut judge ruled those families can review Infowars’ internal marketing and financial documents. The families accuse Infowars of profiting from paranoia to sell more products to Jones’s followers, according to the complaint.”

“There is no amount of anticipated revenue that could possibly justify Roku’s calculated decision,” attorney Josh Koskoff said in a statement to the media. Mark Bankston, another lawyer for Sandy Hook families, described Roku as “indifferent to the suffering caused by Mr. Jones’s continued onslaught of cruelty and reckless lies,” they continued.
The move by Roku is only the latest in attacks against pro-Trump outlets, specifically Infowars who leads the charge in the information war against the global elite.

was removed from the leftist appeasing content provider known as Roku.

YOUTUBE ON ROBERT SPENCER VIDEO: "WE HAVE RECEIVED A LEGAL COMPLAINT FROM THE GOVERNMENT" OF PAKISTAN~PRIME MINISTER IMRAN KHAN ENFORCING BLASPHEMY LAWS OVER THE WEST 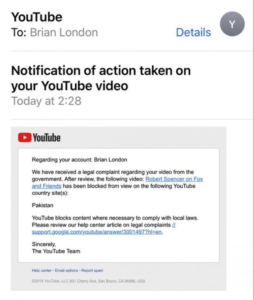 YOUTUBE ON ROBERT SPENCER VIDEO:
"WE HAVE RECEIVED A LEGAL COMPLAINT
FROM THE GOVERNMENT" OF PAKISTAN
BY BRIAN THOMAS
SEE: https://www.jihadwatch.org/2019/01/youtube-on-robert-spencer-video-we-have-received-a-legal-complaint-from-the-government-of-pakistan;
I received this email from YouTube over the weekend. At first I thought it was another malicious copyright or flagging strike, but no, this one turns out to be different. Here’s the text (my highlights):


Regarding your account: Brian London
We have received a legal complaint regarding your video from the government. After review, the following video: Robert Spencer on Fox and Friends has been blocked from view on the following YouTube country site(s): Pakistan
YouTube blocks content where necessary to comply with local laws. Please review our help center article on legal complaints.
Sincerely,
YouTube email

This bit catches my eye: “We have received a legal complaint regarding your video from the government.”
THE GOVERNMENT?
Oh…. let me read on, this is from THE GOVERNMENT of Pakistan! Strange how it just reads “The Government” at the beginning though.
What we have here is Google/YouTube enforcing the censorship laws of an Islamic State (Pakistan) even though those laws should not apply to me or to Google. Google have chosen to be good Dhimmis, respecting the laws of superior Muslims.
The video itself, which I’ll embed below, is one of the very first clips I put on YouTube in 2006. I taped it off Fox News and it is Robert Spencer of JihadWatch and the most remarkable thing about it is how consistent Robert has been through the years. And right. He even talks about an Islamic State, long before what came to be known as ISIS or The Islamic State emerged in the ruins of Iraq and Syria.
Of course Robert doesn’t get booked on Fox and Friends these days: I guess the influence of Pakistan extends beyond YouTube.

"Imran Khan. The cricket captain is now Pakistan’s Prime Minister and a poster boy for his nation’s barbaric blasphemy laws"

The new globalization of Sharia
BY JULES GOMES
SEE: https://www.frontpagemag.com/fpm/272566/do-pakistans-blasphemy-laws-trump-americas-1st-jules-gomes;


PARIS: One in three Christians in Asia faces high levels of persecution after a “shocking increase” of religious-based threats and violence across the world, particularly in China and sub-Saharan Africa, a global advocacy group said Wednesday.
Around half of China’s 100 million Christians encounters persecution, “the worst it’s been in more than a decade”, following “new laws seeking to control religious expression”, the Open Doors watchdog said.
Persecution worldwide increased for the sixth straight year, with a total of 245 million Christians — one out of nine worldwide — facing high levels in 2018, up from 215 million, or one in 12, the previous year.
“Worldwide, our data reveals that 13.9 per cent more Christians are experiencing high levels of persecution than last year. That’s 30 million more people,” Open Doors UK and Ireland CEO Henrietta Blyth said in a statement.
More than 4,300 Christians were killed due to their beliefs worldwide last year, over 3,700 of them in Nigeria, according to the 2019 World Watch List.
The number of deaths in Nigeria almost doubled, with attacks from the jihadist Boko Haram group and ethnic Fulani herders posing a “double threat” for Christians, the NGO said….
North Korea topped the NGO’s “extreme persecution” ranking of 50 countries, as it has since 2002.
Open Doors said there were signs religious repression there was getting worse, but it was difficult to obtain data in the country, where “Christianity is forbidden and is a political crime”.
Following North Korea on the list are Afghanistan, Somalia, Libya, Pakistan, Sudan, Eritrea, Iran, India and Syria.
India entered the top 10 for the first time, Open Doors said, as “Hindu extremists act with impunity and violent attacks on Christians and churches rise”….
Open Doors, a non-denominational mission supporting persecuted Christians, warned that the rate of discrimination and violence was likely worse than it has reported, as it only records deaths proven to be to be motivated by religion.


MUSLIM FROM GEORGIA PLOTTED EXPLOSIVE & ROCKET JIHAD ATTACKS ON
WHITE HOUSE, STATUE OF LIBERTY
BY ROBERT SPENCER
SEE: https://www.jihadwatch.org/2019/01/muslim-from-georgia-plotted-explosive-and-rocket-jihad-attacks-on-white-house-statue-of-liberty;
An Islamic State video just released in late December showed the White House being attacked. Clearly this is something the Islamic State very much wanted to do. Meanwhile, “a community member” contacted law enforcement on Hasher Jallal Taheb, and that’s good. Imagine what might have happened if this person hadn’t done so. But where did Hasher learn his understanding of Islam? Will anyone be investigating that? Or will they wave it away with “he was radicalized on the Internet”? 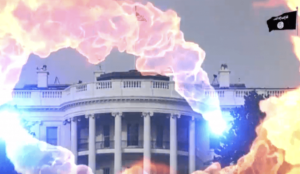 
Federal authorities on Wednesday announced a terrorist case against a metro Atlanta resident accused of plotting to destroy the White House and other Washington D.C. government buildings.
Hasher Jallal Taheb, of Cumming, was arrested in Gwinnett County and appeared briefly in court in downtown Atlanta in the case brought the FBI….
The criminal complaint, which accuses him of plotting to destroy a government building, said a community member contacted law enforcement in March 2018 to say that Taheb had become radicalized….
Taheb allegedly said he planned to travel to “hijra,” a term said to refer to Islamic State territory and he was selling the car to fund the trip. But he didn’t have a passport.
He allegedly told the informant he wanted to attack the White House and Statue of Liberty in jihadist attacks.

A man from Georgia has been arrested in a terror plot that allegedly targeted federal buildings–including The White House, according to WALB News.
He was hoping to use an anti-tank rocket to take out attacks targets like the White House and the Statue of Liberty, but it seems he never obtained the weapon.
The suspect is Hasher Jallal Taheb, of Cumming, Georgia. Taheb appeared in a federal court in Atlanta Wednesday.
According to U.S. Attorney BJay Pak, Taheb is charged with “intent to destroy by fire or explosive a building owned, possessed or leased by the United States,” among other charges.
In March 2018, a member of the community had reported to local law enforcement that he had “become radicalized, changed his name and made plans to travel abroad,” the complaint states.
In December, Taheb allegedly showed an undercover operative a hand-drawn diagram of the White House and asked for help with obtaining weapons and explosives for the attack, the complaint states. The FBI traded Taheb weapons and explosives in exchange for his car, and he was arrested after the exchange.
“He said the group would fight to the end and make it a big bang,” according to the document.


On Dec. 14, Taheb allegedly “broadened his prospective targets,” indicating that he wished to attack the Washington Monument, the Lincoln Memorial and a “specific synagogue” in the Washington, D.C. area, which was not named, according to the complaint. He also discussed the need for a “base” where they could regroup and “give a speech to motivate people” and show clips of “oppressed Muslims,” the document states.


The next day, he allegedly uploaded a 40-page manifesto he authored to Google Docs, which stated the importance of “defensive jihad” and included justifications for “creating and leading his group to conduct violent attacks,” according to the complaint. He also created a group chat with the informant and undercover agent, where he would allegedly discuss his plans to attack in the following weeks.