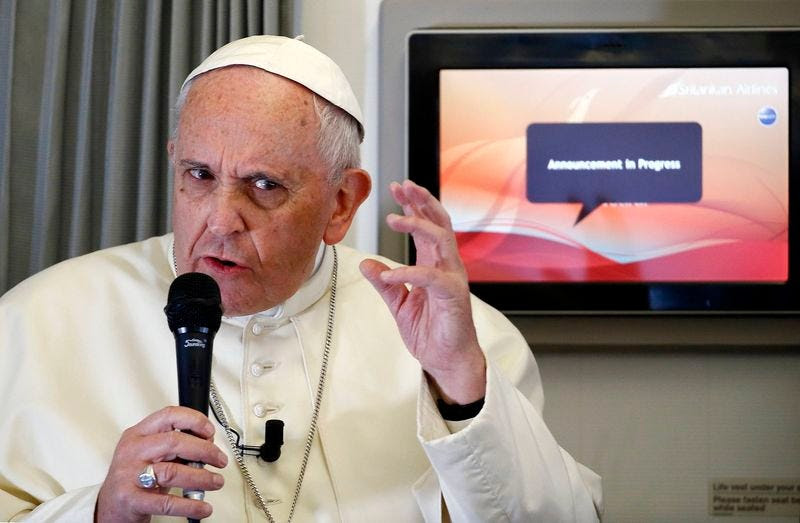 How Green Was My Vatican: Statement from the Papal Environmental Conference

by Rebecca Terrell
SEE: http://www.thenewamerican.com/tech/environment/item/20763-how-green-was-my-vatican; republished below in full unedited for informational, educational, and research purposes:
In his ongoing crusade to promote the scientifically discredited notion of human-caused global warming, Pope Francis has issued a joint statement in collaboration with world leaders who met April 28 in Vatican City for a climate conference hosted by the Pontifical Academies of Sciences and Social Sciences and the United Nations.
The 11-page document is packed with bureaucratic jargon that levels a frontal assault on industrialized prosperity, free-market capitalism, and human procreation. The statement begins: "Unsustainable consumption coupled with a record human population and the uses of inappropriate technologies are causally linked with the destruction of the world's sustainability and resilience." It asserts that climate change "is a global problem whose solution will depend on our stepping beyond national affiliations and coming together for the common good," and that to save the world we must reach "a level and sustainable population." The declaration urges that "all people of good will should encourage their governments to undertake these commitments to action." It calls for "bold and humanitarian action by the world's religions acting in unison" to bring about changes "as prioritized under UN’s sustainable development goals."
In layman's terms this might simply be restated as: Greedy capitalist pigs and unsterilized masses are destroying Mother Earth, and the only way to avert catastrophe is for everyone to bow to the exploitive decrees of the godless United Nations.
Karl Marx couldn't have wished for more.
He would have been especially proud of the wealth redistribution scheme that the Pope's confreres propose: a "system of national accounts that records movements in the true wealth of nations," making it easy to fill "unacceptable gaps between the rich and the poor." In this respect, these collectivists advise, "We should be prepared to accept a reallocation of the benefits and burdens that accompany humanity's activities both within nations and between nations."
The authors obviously borrowed heavily from Marxian economics and Malthusian population theory, while the scientific background in the report is culled from previous Vatican environmental conferences, the UN's Intergovernmental Panel on Climate Change, the World Bank, and a propaganda piece published in 2014 by the American Association for the Advancement of Science.
But they did introduce another relatively novel idea that they say is "over and above" other suggested reforms in importance. They call for a "moral revolution" to "reorient our attitude toward nature." The declaration raises radical environmentalism to the realm of moral virtue and even infers that our "greedy" and "unsustainable consumption of fossil fuels" is immoral. Our supposed destruction of Earth is "the sin for which our descendants will be least likely to forgive us." They appeal to the Catholic Church to lead a union of world religions under the banner of sustainable development.
This declaration, entitled Climate Change and the Common Good: A Statement of the Problem and the Demand for Transformative Solutions, is the brainchild of the 60 world religious leaders and climate alarmists who attended the pope's day-long event — all of them left-wing notables such as United Nations Secretary-General Ban Ki-moon, who delivered the opening address, and bureaucrats from the UN's Sustainable Development Solutions Network, which co-sponsored the conference. Other speakers and panel discussion leaders included eco-cheerleaders such as American economist Jeffrey Sachs, who directs the Earth Institute at Columbia University, Nobel laureate Mario Molina, famous for his scientifically dubious hypothesis that industrial chlorofluorocarbons deplete the ozone layer, and University of California professor Veerabhadran Ramanathan, who has called global warming "the most important environmental issue facing the world today."
In a blatant and hypocritical disregard for honest debate, the pope excluded from his invitation list thousands of scientists worldwide who maintain that no shred of evidence supports the notion that human activity is wreaking havoc on climate and the environment. Press members who asked questions at the summit about the skeptical viewpoint were silenced.
So there are no surprises in the joint statement, as scandalous as it may be. It says exactly what you would expect from a fraternity of back-slapping climate alarmists and global collectivists. The pope has certainly made no secret of his environmentalist zeal, repeatedly calling it a sin to "exploit the Earth." According to his climate change advisor Bishop Sanchez Sorondo, he hopes to influence the UN's climate change talks scheduled in November and December this year. Pope Francis also plans in June to publish an encyclical, an important papal pronouncement. This will be the second of his papacy and his first on the environment. He's been planning it for more than a year, and speculation over what it will hold runs rampant through Catholic and secular media. The April 28th joint statement leaves little doubt.
Posted by John at 7:48 AM Links to this post

DARE TO OPT OUT YOUR KIDS?
SEND IN THE SWAT TEAM,
ARREST THEM, OR BLOW THEM AWAY
WITH THE GUNS & AMMUNITION WE BOUGHT FOR JUST A TIME LIKE THIS! 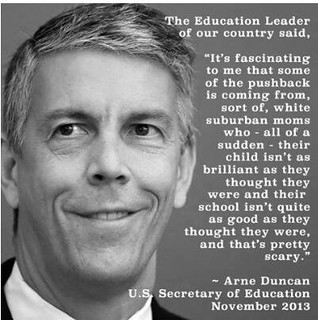 The public backlash against end-of-year tests specifically aligned with Common Core standards has Education Secretary Arne Duncan doubling down. The Secretary is threatening federal intervention if testing boycotts continue. Duncan told reporters at the Education Writers Association seminar in Chicago this past week, if students and parents continue to opt out of government-mandated tests there will be consequences.
As for opt-outs, Duncan said, “states are supposed to work with districts” on meeting a requirement in the NCLB law that 95 percent of students participate in tests. “But if states don’t do whatever then we have an obligation to step in… this is really about not just an assessment…it’s about a civil rights issue.”
Duncan doesn’t indicate what measures his department will use to enforce those rights in order to prevent schools from opting out. Already, an education advocacy group says over 180,000 New York State students refused to take the Common Core English Language Arts Exam in April.
At Nathan Hale High School in Seattle, Washington not a single 11th grade student showed up to take the federally mandated Smarter Balanced Assessment Consortium exam (SBAC). Earlier this year, teachers at Nathan Hale passed a resolution against the Common Core Standards test, but Seattle Superintendent Larry Nyland threatened them with the loss of their teaching licenses if they didn’t administer the test.

Washington’s State Superintendent Randy Dorn warned without a 95% statewide participation rate, the federal government could cut funding and label Washington Schools “high risk.”
Withholding federal monies may not be the only way the feds quell the opt-out movement.
In 2010 the Washington Post’s Valerie Strauss asked DOE officials about their recent purchase of 27 Remington Brand Model 870 police 12-gauge shotguns.  She specifically wanted them to give examples of when the shotguns might be used. A DOE spokespersons referred her to the following from the Office of Inspector General website:

The Office of Inspector General is the law enforcement arm of the U.S. Department of Education and is responsible for the detection of waste, fraud, abuse, and other criminal activity involving Federal education funds, programs, and operations. As such, OIG operates with full statutory law enforcement authority, which includes conducting search warrants, making arrests, and carrying firearms.
At the time of Strauss’s article, Dave Workman of the Washington Examiner pointed out that in the Department of Education’s solicitation notice to purchase the weapons, the 27 shotguns bought in 2010 were “compatible with ED existing shotgun inventory, certified armor and combat training and protocol, maintenance, and parts."


The Department’s most recent purchase was from July 2013 with the acquisition of 30 Glock 27 pistols. Shotguns, Glocks, and combat training for Education Department personnel.
Will Duncan send in SWAT teams with Glocks to force opt-out parents and their kids, including his favorite target, “white suburban moms,” to take the test or else? Duncan has already put the onus on the little test-dodgers’ moms and dads. In the same discussion, he told reporters his kids go to public school and they get tested. It’s “not a traumatic event,” It’s just part of most kids education growing up…Sometimes the adults make a big deal and that creates some trauma for the kids.”
________________________________________________________ 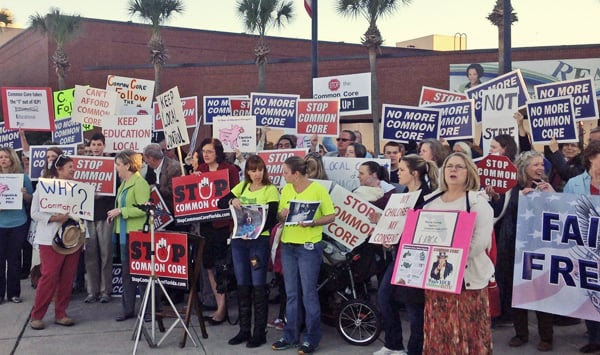 Some parents told The Greenville News their children were pressured in front of their peers to give in and take the tests, then were removed from the classroom and taken into another room at their schools where the principal again asked them to take the test.


When children refused, they were taken to the school office and issued a discipline referral marked "refusal to obey," according to documents sent by parents to The News.

Posted by John at 7:18 AM Links to this post