Steps To Prosecute George Soros For Treason
Has Begun

SEE: https://newswithviews.com/steps-to-prosecute-george-soros-for-treason-has-begun/
Soros Loves Kush! Jared Has $1 Billion Debt
to George and His Pals
Published on May 3, 2017

Jared Kushner didn't disclose his business ties with George Soros, Peter Thiel, and Goldman Sachs, or that he owes $1 billion in loans, The Wall Street Journal reported on Tuesday.

The top White House adviser and son-in-law of Trump failed to identify his part ownership of Cadre, a real-estate startup he founded, which links him to the Goldman Sachs Group and the mega-investors George Soros and Peter Thiel, sources told The Journal.

Kushner also failed to identify debt of more than $1 billion from 20 lenders and personal guarantees to pay more than $300 million of that, according to The Journal.

KUSHNER, IVANKA & GEORGE SOROS~A COMPLETE LIST OF SOROS BACKED ORGANIZATIONS
Kushner And Ivanka Highly Valuable NWO Assets
Published on May 3, 2017
Alex Jones breaks down the internal dynamics that have compromised Ivanka Trump and Jared Kushner. Two of President Trump's closest confidantes that unfortunately have an agenda that is at complete odds with President Trump's policies and destiny as the leader of the free world.

The president’s son-in-law discussed his stake in Cadre, which is housed within a company called BFPS Ventures LLC, with the Office of Government Ethics and “resigned from Cadre’s board, assigned his voting rights, and reduced his ownership share, Kushner’s lawyer Jamie Gorelick told The Wall Street Journal.
Kushner also reportedly did not disclose $1 billion in loans on several properties from over 20 different lenders, but didn’t appear to violate disclosure rules.
“Anything that presents a potential for the conflict of interest should be disclosed so that the public and the press can monitor this,” said a Republican former chairman of the FEC (Federal Election Commission) Trevor Potter.
Kushner co-founded Cadre with his brother Joshua and Ryan Williams, a friend and former Kushner Cos. employee in 2014. Cadre markets properties to prospective investors and collects a fee on each deal made.

Williams, Cadre’s chief executive, said the company is working to update its public filings to “reflect Jared’s non-operational, non-management relationship with the company, which has been in place since the inauguration.”
Kushner’s partnership with Soros may be seen as unsavory by Trump and his base, since it was Soros that poured millions into actively fighting against Trump’s agenda through disruptive leftist activist groups like the Open Society Foundation (OSF), demonstrations and “protests”, and propaganda.
This isn’t the first time that Kushner’s questionable business ties have come to light.
Last week we reported that Kushner had been compromised with bribes by Communist China over his family’s office tower on 666 Fifth Avenue. 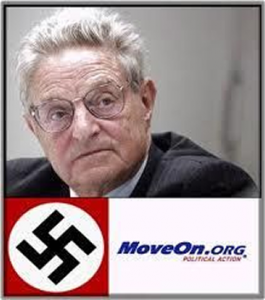 This will take time to read but it is worth the time to do so. Indeed it is essential that all read this to understand why this creature must be charged and prosecuted for treason and sedition. Many of the names of the organizations listed are deceptive and appear to be something good. Then look at the couple of lines under each which tells what that organization is actually about.
You will see (by) two Catholic organizations he formed that Soros has actually put the Vatican under his control. This will explain Pope Francis.
Both Soros and his Open Society Foundations provide funding directly or indirectly to over 200 US organizations. Some he owns outright. As you read these, prepare to be shocked:

“Secondary“ or “Indirect“ Affiliates of the George Soros Network
Special thanks to writer Tim Brown for gathering these stats and breaking this story on Black Republicans Blog. Stay tuned for how to charge Soros with Treason and Sedition, seize his assets, more than $29 Billion to pay for the damages his orchestrated riots have caused, then put him in prison.
He is easy to find. Soros lives in a mansion located in Katonah, New York, and is listed as a “citizen” there. He also has an elaborate summer home in Southampton (Long Island), New York. And he has an apartment in New York City.

His office is in New York City at 250 West 55th Street, 27th floor. The phone number listed is: 212-872-1054. He also has an office in London, but this one seems to be the main one for his investment business which handles $25 billion. His personal fortune dwarfs that figure.

Rev. Austin Miles has broken many major stories including the required study of Islam in the public schools, and reviews books, movies and concerts which brought him an award from University of California at Fullerton for Critical Review. He was a writer/researcher and technical consultant for the multi-award winning series "Ancient Secrets of The Bible," which debuted on CBS TV and has been in constant re-runs since.

FEDERAL BUDGET: TRUMP STILL ALLOWING FANNIE, FREDDIE TO BE ROBBED TO PAY FOR OBAMACARE
Published on May 4, 2017
In response to a direct question, Mnuchin acknowledged it was true President Obama did engineer the “Net Worth Sweep” (NWS) in August 2012 to divert funds from the two Government Sponsored Entities (GSEs) to pay for Obamacare, after Congress refused to fund the low-income insurance subsidies critical to keep afloat the Affordable Care Act (ACA). https://www.infowars.com/treasury-sec...
http://dailycaller.com/2017/03/23/pre...


REGULATORS ASKING IN VAIN FOR TRUMP TO STOP
THEFT OF INVESTORS DIVIDENDS AND INVESTMENT GAINS
Posted by John at 9:12 AM Links to this post

RUSH LIMBAUGH GOES TOE TO TOE WITH MIKE PENCE
Published on May 3, 2017
With Mike Pence on his program, Rush Limbaugh puts tough questions to the current VP, including inquiries regarding the swamp and its supposed draining.

Posted by John at 9:06 AM Links to this post