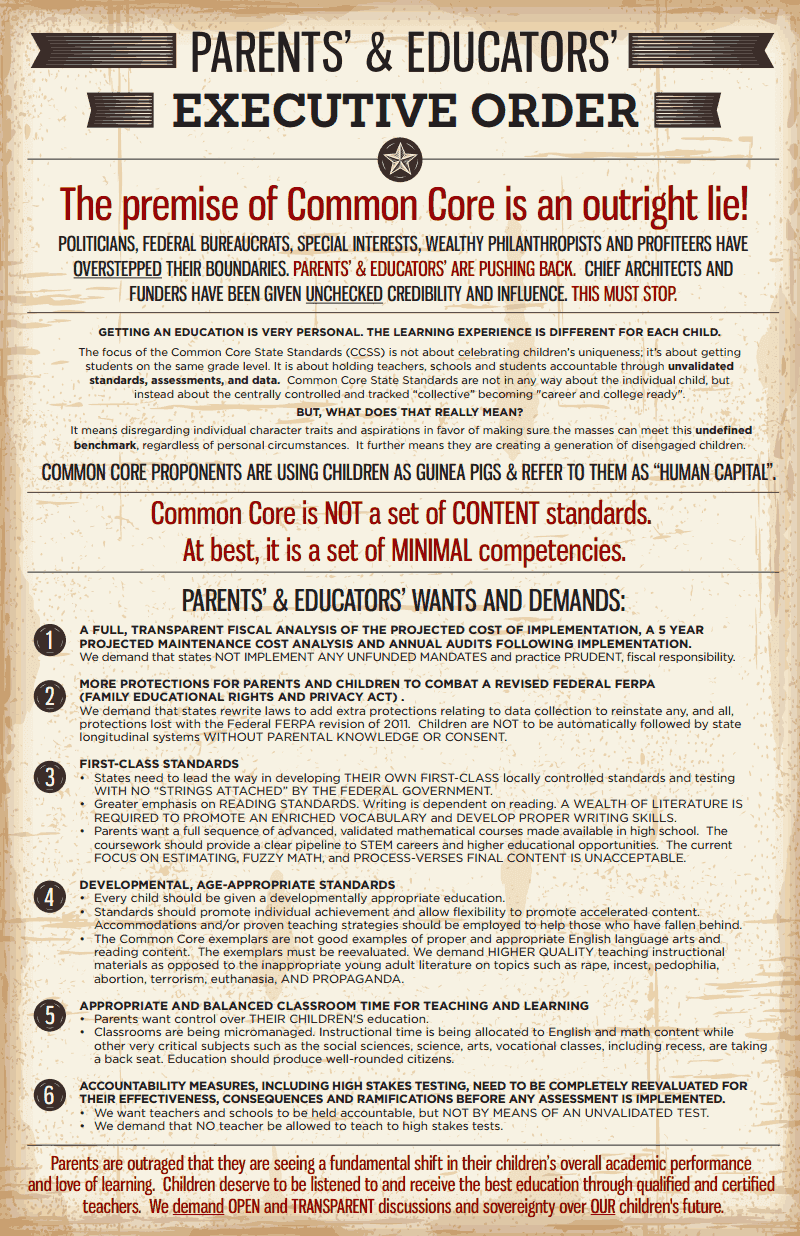 Posted by John at 7:09 PM Links to this post

Tell It Like It Is: "Common Core: Progress or Debacle":

Posted by John at 6:20 PM Links to this post

ROTTEN TO THE (COMMON) CORE

Brought to you by The Communitarian Trap blog at:
http://thecommunitariantrap.blogspot.com/2013/10/rotten-to-common-core.html,
reprinted in full unedited here:

Rotten to the Common Core 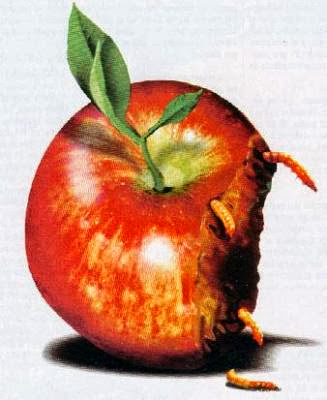 Common Core, an education program developed with funding from the Bill and Melinda Gates
Foundation to improve academic standards in public schools, will fall far short of its stated objective.

Its promoters tout it to be a “state-led effort to establish a single set of clear educational standards
for English-language arts and mathematics…” to provide teachers, parents and students with a set of
well defined expectations and “[h]igh standards that are consistent across states…”

Underlying these statements is the proposition public schools are not performing very well or
completely failing to educate students to a necessary standard.

Based on the fact SAT scores, since 1962, have twice been adjusted downward to artificially depict
higher scores among students taking the exam but have continued to decline and national literacy
scores continue to decline as a percentage of the United States population it is difficult to refute
the dysfunctional public school proposition. Their solution to this very real problem, however, is like
putting a gangrene infected band aid on a gangrenous open wound. 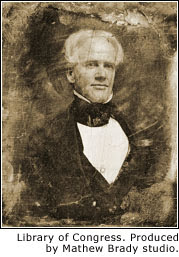 America’s modern public school system is the manifestation of its founder’s vision, the father of
American public education, Horace Mann. Horace Mann, a Unitarian Massachusetts school board
member in the 1840s, wrote twelve annual reports on public education that was to become the
foundation of every public school in America. Mann [a Freemason] prototyped his “Common Schools”
in his reports on the Prussian school system.

Prussia was the first European state to institute public schools, from which every other country in
Europe modeled their public schools. So it is no coincidence Mann modeled his “Common Schools”
off the ones he observed in Prussia while visiting schools in Europe. Neither is it a coincidence
Prussia, known for its autocratic and dictatorial society that ultimately unified the other German
states under its control, would impose an uncompromising uniform standard upon its population.

That America has become passively obedient to the national government can be seen throughout the
20th and the 21st Century in that Americans sit passively by or actively cheer when: Congress passes
laws violating the Constitution, Presidents exceed their limited authority by issuing orders not
supported by any law passed by Congress and the Supreme Court, when asked to interpose on behalf
of we the people, uphold these things through the most ridiculous, convoluted, humanistic and illogical
arguments a human mind can conjure. One only need compare the grievances listed in the Declaration
of Independence to similar modern occurrences to see contemporary American society does not have
the political will of its forefathers.

For America, that was founded on and has celebrated its diversity of ideas, extensive government
control and standardization of any kind seems counter intuitive. The framers of the Constitution were
careful to preserve the independence of the States by only delegating finite powers to the national
government. This allowed the citizens of each State to preserve their cultural diversity and pursue
their own happiness.

Now, control over students in what and how they learn has been institutionalized in America by Mann
via public schools. Mann, through his Common School system, was able to undo what so many sacrificed
in the War of Independence to acquire and the founders carefully guarded in both the Articles of
Confederation and the Constitution. This centralized control over public school students continues to
grow and its latest adaptation is the voluntarily imposed Common Core curriculum.

First, according to the Pioneer Institute and the American Principles Project, which conducted a state
by state comprehensive cost analysis[1] of implementing Common Core, in Pennsylvania alone the extra
cost of implementation was estimated to be $645 million. As of January 2012, Pennsylvania was set to
receive only $40 million in Obama’s Race to the Top funds, which were contingent upon adoption of
Common Core standards, student Longitudinal data collection, and a teacher evaluation program.

Adding this up, for the adoption of a national standard, Pennsylvania might receive up to 6% of the
extra costs from the government, but will have to foot the bill for over a half a billion dollars on their
own. None of this makes fiscal sense when considering if Pennsylvania did not adopt any other new
program their education costs would remain relatively constant.

Second, if parents allow the government or any other entity to dictate how their children must be
educated or what they must learn, the parents might as well just give their children to the government
or entity to raise. Even now, parents have limited control over what children are taught in public
schools and everyone has to pay for public schools whether they have children or not. Common Core
will add more of the same to an already burdensome tax system through another layer of bureaucracy
whose standards, if history is any indication, have limited hope of being achieved.

Third, children are not ginger bread men to be cut out of common dough; they are unique individuals
with unique learning talents, interests and needs. A common standard may fit everyone, but it will not
fit anyone very well and its results will be as disappointing as the results from the public schools
system, which the program is intended to fix.

Furthermore, children in America do not belong to any government, community, business, or labor
consortium. They belong to their parents and to them alone. Parents, therefore, must decide the
values, morals and information from which their children will most benefit to live in society. To
abdicate this responsibility is to allow someone else to make decisions that will not always be to the
benefit of the children or the parents.

Like every other aspect of life, the Bible provides guidance on whose responsibility it is to teach
children. Any government; national, State, or local that dictates what children must be taught and
extorts money through taxation to pay for their vision has overstepped the bounds of their biblical
jurisdiction. Romans 13:3-5 describes the purpose of government: to wield the sword of justice against
evil doers, but nowhere in the Bible will you find education as one of its functions.

In Proverbs 22:6, one will find the Bible giving responsibility of a child’s education to parents. The Bible
also states in Proverbs 1:7, “The fear of the Lord is the beginning of knowledge,” and since public
schools have completely pushed Christ out of the classroom it is no wonder their academic performance
has gone with Him.

Mann’s utopian pursuit of standardized universal “free education” was the European totalitarian
bridgehead into America and it has turned into the coercive failed public school system America has
today. Like all utopias, the only way to achieve them is through coercion.

This coercion is nearly absent from non-publicly funded schools and these schools most always cost less
to operate and produce better educational results in nearly every measurable way than their publicly
funded counterparts. A 1997 study[2] found home schooled children, on the average, outperformed
their public school counterparts by 30 to 37 percentile points on all subjects. These findings were
further supported by Dr. Lawrence Rudner who found children that were homeschooled all their school
aged years had the highest academic achievement.

Since uniformity and top down imposed standards have not worked, the solution to deteriorating
performance in America’s public schools is simple, return responsibility for education to parents by
defunding public schools and restoring parents’ right to decide where and how to educate their
children.

Some may argue defunding public schools would deprive many “under privileged” children of an
education, but considering what they receive now, it might actually be an improvement. Besides,
violation of property rights, through taxation for public schools, or any other violation of the rights
specifically mentioned in the Declaration of Independence is never justified, no matter how noble
the cause. Additionally, it is an individual’s responsibility to be charitable to the under privileged,
because when a government does it through taxation it is called theft or extortion, not charity.

Much of the resistance to defunding public schools comes from the fact most people living today, who
grew up in America, are a product of a public school, have known no other system of education, and
cannot imagine how another system would work. Those who think this way are oblivious to the fact
that prior to 1840, all American schools were non-public, biblically based, and produced the founding
culture, which in turn established the most successful nation in the history of the world. The
secularized standardization of Common Core, by contrast, is rotten to the core just like the seed of
“Common Schools” from which it was germinated that produced the culture who voted for the
politicians America has today. If people were to take the time to compare the results of the two
systems they too would see for themselves what Mann has done to education.

[1] Pioneer Institute and American Principles Project, National Costs to Aligning States and Localities
to the Common Core Standards, No 82, February 2012.
[2] Dr. Brian Ray, Strengths of Their Own: Home Schoolers Across America.

Additional Comments: Common Core teaches the ideology of communitarianism, and it is directly
affiliated with the United Nations. Attempts are going to be made to make Common Core go away,
but as you will see - it was designed to stay.

The UN Educational, Scientific and Cultural Organization (UNESCO) has a program called “Education for
All” that includes the same people and same ideas as Common Core. The Global Fund for Education was
formulated by the UN, “agreed to” by Barack Obama, funded by Bill Gates, and Common Core was
imposed on the American people through Department of Education (DOE) funding schemes.[3]

It is interesting to note that John Dewey has gotten most of the credit for being the Father of Public
Education. Perhaps the reason why Horace Mann's contribution isn't as well known is because of the
connection to Germany.

The article above gives important details on how and why our public school system evolved. Please
watch the following video, since it will give you the big picture and the end game.


Additional viewing (Not an endorsement)

Related Posts
Common Core and the Communitarian World Government
Communitarianism: In Transition to Collectivist Values
Charter Schools: The One World Classroom
Posted by John at 3:25 PM Links to this post