NOW HE CAN AFFORD TO LOSE THOSE BIBLE BELIEVING SUCKERS, THE NEW YORK CITY WAY 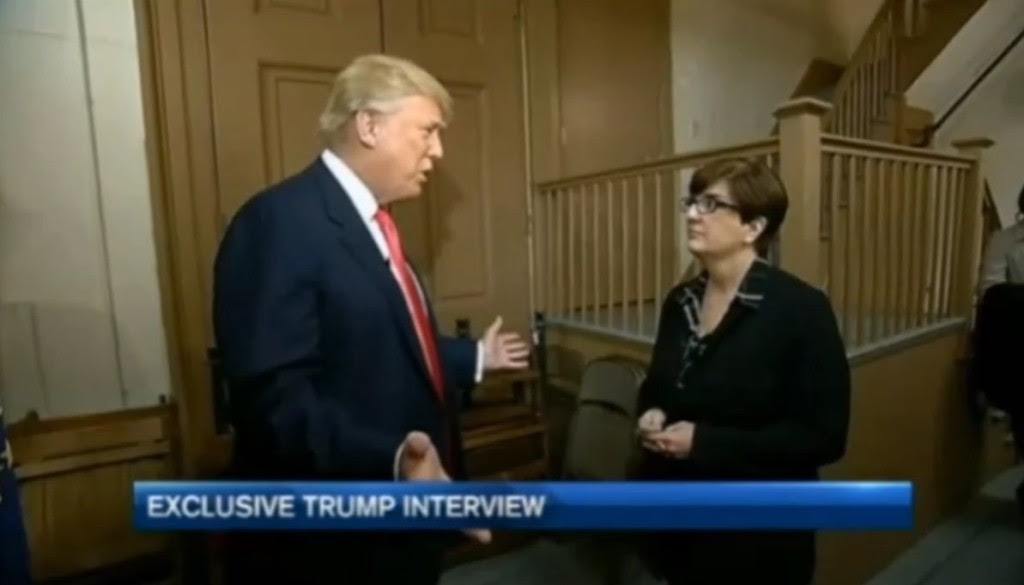 TRUMP WAS AT THEIR "WEDDING": 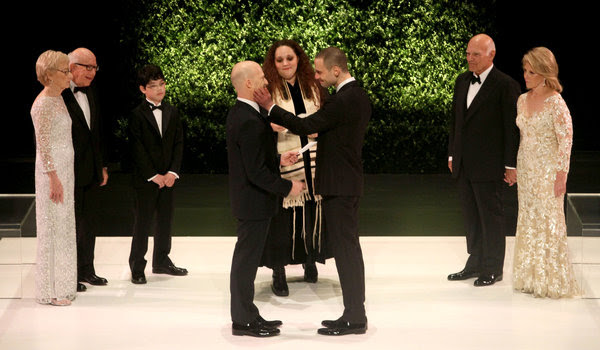 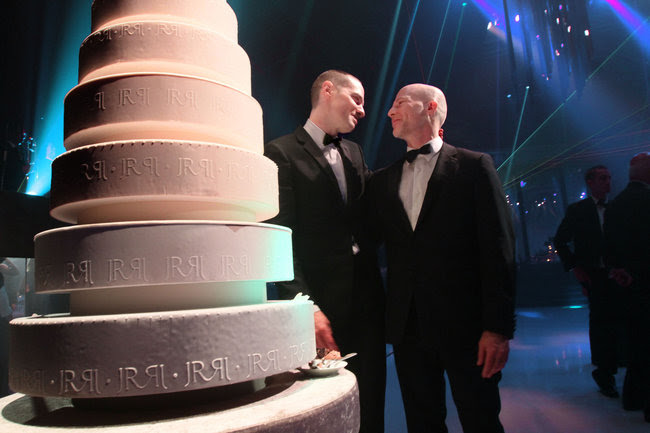 on ‘Gay Equality’ Under Presidency

BY HEATHER CLARK
SEE: http://christiannews.net/2016/02/07/trump-promises-more-forward-motion-on-gay-equality-under-presidency/; republished below in full unedited for informational, educational, and research purposes:

EXETER, N.H. — Donald Trump told a lesbian publisher in New Hampshire on Thursday that the American people will see “more forward motion” on “gay equality” under his presidency, citing it as a part of his effort to bring people together.
Trump was interviewed in Exeter by Susan O’Connell, the publisher of Bay Windows, which according to its website is “New England’s largest publication for lesbian, gay, bisexual and transgender readers.”
“I’m a lesbian,” she told Trump. “And we’ve had some great progress for the gay and lesbian community through politics, through all sorts of judicial actions and elected actions over the past 20 years.”
“When President Trump is in office can we look for more forward motion on equality for gays and lesbians?” O’Connell asked.
“Well, you can,” Trump replied. “And look, again, we’re going to bring people together. And that’s your thing and other people have their thing. We have to bring all people together, and if we don’t we’re not going to have a country anymore. It’s going to be a total mess. It’s a mess right now, and it’s going to be worse.”
“So, it’s a very important choice this presidential year—very important—maybe the most important we’ve had in many, many decades,” he continued. “And I’m going to bring people together.”
Trump has stated that he does not support same-sex “marriage,” but also told reporters last year that he believes the U.S. Supreme Court ruling in Obergefell v. Hodges is “the law of the land.”
“You have to go with it. I mean, you have to go with it. The decision has been made, and that is the law of the land,” he told MCNBC last September when asked about the controversy surrounding Kentucky clerk Kim Davis.
Trump has also acknowledged that he himself has attended a homosexual “wedding,” telling the Hollywood Reporter last year that he attended the ceremony of Broadway theater owner Jordan Roth.
“I like the idea of amending the 1964 Civil Rights Act to include a ban on discrimination based on sexual orientation,” he told the homosexual publication “The Advocate” in 2000. “We don’t need to rewrite the laws currently on the books, although I do think we need to address hate-crimes legislation. But amending the Civil Rights Act would grant the same protection to gay people that we give to other Americans. It’s only fair.”
Former Democratic President Jimmy Carter, who claimed to reporters last year that Jesus would support “gay marriage,” said last week that he would prefer Trump for president over Ted Cruz because he finds Trump to be “malleable,” meaning pliable or able to be influenced or swayed. He called Cruz “far right wing” and lamented that he is not “malleable” on the issues.
“Trump has proven already that he is completely malleable,” Carter said. “I don’t think he has any fixed positions that he would come to the White House and fight for.”
TRUMP JUST LOST MOST FUNDAMENTAL CHRISTIAN VOTERS; "PROFESSING EVANGELICALS" LIKE JERRY FALWELL, JR. & OTHERS MAY NOT BE TURNED OFF

Posted by John at 3:21 PM Links to this post

NEW HAMPSHIRE PROVES ITS LOVE FOR FREEDOM DOES NOT PRECLUDE A LICENSE TO KILL WHEN LIFE AND LIBERTY OF PRE-BORN AND NEW BORN BABIES GETS IN THE WAY
SEE: http://christiannews.net/2016/02/06/new-hampshire-rejects-bill-requiring-abortionists-to-care-for-babies-born-alive-ban-on-dismemberment-abortions/; republished below in full unedited for informational, educational, and research purposes:
BY HEATHER CLARK
CONCORD, N.H. — Lawmakers in New Hampshire have rejected a bill that would require abortionists to provide care for babies who are born alive, as well as a bill that would have barred the practice of dismemberment abortions.
House Bill 1627, also known as the “Born Alive Infant Protection Act,” would make criminal denying the infant health care, resulting in his or her death.
“The physician performing an abortion shall take all medically appropriate and reasonable steps to preserve the life and health of a born-alive infant,” it reads in part. “If an abortion performed in a facility other than a hospital results in a live birth, a physician attending the abortion shall provide immediate medical care to the infant and call 9-1-1 for an emergency transfer of the infant to a hospital that shall provide medically appropriate and reasonable care and treatment to the infant.”
It also notes that “[a]ny born-alive infant including one born in the course of an abortion procedure shall be treated as a legal person under the laws of New Hampshire, with the same rights to medically appropriate and reasonable care and treatment, and birth and death.”
The bill was voted down 9-7 in the House Judiciary Committee on Tuesday, with those against it opining that “medical procedures” should not be legislated, and those for the measure contending that babies who survive their death sentence ought to receive care.
The committee also voted down House Bill 1560, which would have banned dilation and evacuation abortions (D&E) in the state, also known as dismemberment abortions. The procedure involves removing the child from the womb piece by piece, and then re-assembling his or her body on a tray to ensure that all of the parts were extracted.
“‘Dismemberment abortion’ means, with the purpose of causing the death of an unborn child, knowingly dismembering a living unborn child and extracting such unborn child one piece at a time from the uterus through the use of clamps, grasping forceps, tongs, scissors, or similar instruments that, through the convergence of two rigid levers, slice, crush, or grasp a portion of the unborn child’s body in order to cut or rip it off,” the bill reads in part.
The bill was voted down 9-8 as some lawmakers opposed providing guidelines for abortionists and others opined that there are “more humane” ways to kill a child.
“We have the technology well within our means to do these executions in a humane way,” Rep. Kurt Wuelper, R-Strafford, said, according to the Union Leader.
In the meantime, Republican presidential candidate Chris Christie spoke out against candidate Marco Rubio’s beliefs about abortion this week, stating that they are too extreme for New Hampshire voters.
“[H]e has made it very clear that on the issue of pro-life, Marco Rubio is not for an exception for … rape, incest or life of the mother,” Christie said on MSNBC’s “Morning Joe.” “I think that’s the kind of position that New Hampshire voters would be really concerned about.”
“I’m pro-life, but I believe that rape, incest and life of the mother—as Ronald Reagan did—should be exceptions to that rule,” he said.
Posted by John at 3:01 PM Links to this post