AND SUPPORTING ABORTION
SHOWS HIS TRUE COLORS
AS A MORAL RELATIVIST
WHO IS NOT
"GOD FEARING" HIMSELF
MORAL ISSUES HAVE
NO PLACE IN POLITICS
“My hope is this: There are Republicans out there who will be forever pro-life. Unfortunately, there will be some who still, for whatever reason, object to, dissent to, are uncomfortable with, the gay and lesbian community, but I think it’s about that time that they recognize that there are good, honest, God-fearing people in those two groups whose views should be respected and if not respected at least tolerated. And if we’re willing to be nonjudgmental about those views … you can be an advocate in a private way for those points of view, but in my judgment, that’s not to be at the epicenter of your political agenda and certainly shouldn’t be at the heart — such a critical issue for the GOP nationally. In my judgment, it doesn’t belong,” he said.
See: http://www.buzzfeed.com/chrisgeidner/tom-ridge-pushes-back-against-tea-party-ideology-with-plea-f. 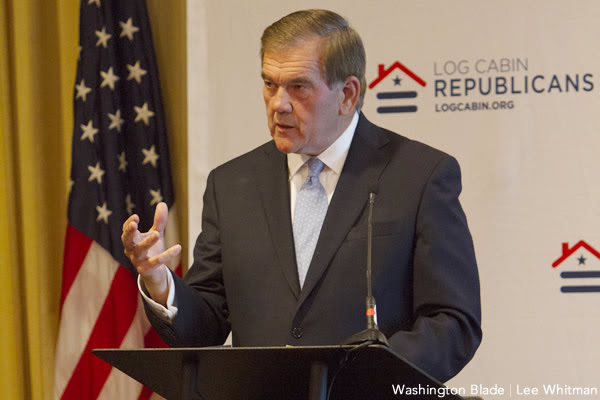 http://www.lifenews.com/2013/10/31/tom-ridge-ignores-responsibility-for-kermit-gosnell-attacks-pro-lifers/.
QUOTES FROM RIDGE AS PER ABOVE ARTICLE:
"Gosnell was allowed to operate his “house of horrors” with impunity thanks to irresponsible and unjustifiable policies put in place by former Governor Tom Ridge. The grand jury report in the Gosnell case revealed that “Ridge administration officials concluded that inspections would be ‘putting a barrier up to women’ seeking abortions. Better to leave clinics to do as they pleased.’”
“Sometimes we [Republicans] just come across as too damned self-righteous, and I’m sorry, that’s just not the 21st-century political party GOP that I think we need to govern America,” Ridge said.
“Many Americans are outraged by the moralistic attacks on the gay and lesbian community from some within our party,” Ridge continued, lambasting what he called “the narcissists and ideologues within our party” who promote an “offensive and exclusionary view,” as well as an “unacceptable rigidity and self-righteousness on social issues.”
"Pro-life activists, Ridge said, “forget about separation of church and state” and participate in activities that are “consistent with what a church may propose but should not necessarily be at the epicenter of governing.”"
http://www.breitbart.com/Big-Government/2013/10/30/Former-PA-Gov-Tom-Ridge-Ignored-Gosnell-s-House-of-Horrors-Accuses-Social-Conservatives-Of-Tyranny

Tom Ridge Pushes Back On Gay Issues In GOP With Plea For “Practical” Tolerance:

http://www.buzzfeed.com/chrisgeidner/tom-ridge-pushes-back-against-tea-party-ideology-with-plea-f.
EXCERPT/QUOTE FROM ABOVE ARTICLE:
"On gay issues, Ridge acknowledges, he has traversed quite a path to get to that place of tolerance, saying, “Life, politics and government is a journey, and your positions on issues as you go along that journey may become more fully embedded or, because of circumstances or other changes, they can change. As you know, when I was governor, I signed the Defense of Marriage Act [in Pennsylvania]. Since that time, frankly, my point of view has evolved.”"
"To members of his party, he said, “You may not agree with me on some of these social issues, but I want you to respect them and don’t make them the centerpiece of your political agenda. They shouldn’t be there, in my judgment.”"
________________________________________________________
From: http://www.logcabin.org/pressrelease/keynote-address-from-governor-tom-ridge-at-the-log-cabin-republicans-spirit-of-lincoln-event/:
"Keynote Address from Governor Tom Ridge at the Log Cabin Republicans Spirit of Lincoln Event"

Posted by John at 5:08 PM Links to this post

THE GARDEN STATE
WHERE CHRISTIANS ARE NOT WELCOME
TO PLANT THEIR GODLY IDEAS
THAT CONFLICT WITH PAGAN BELIEFS
The legalistic, liberal, high tax state of New Jersey has a reputation for blaming people who move there from the big cities of New York, Philadelphia and Wilmington for all its ills, and the disappearance of its once pristine farmland to developers.
Now, the self-described "most densely populated state" has no room for outspoken Christians who remind them of God's laws. For example: 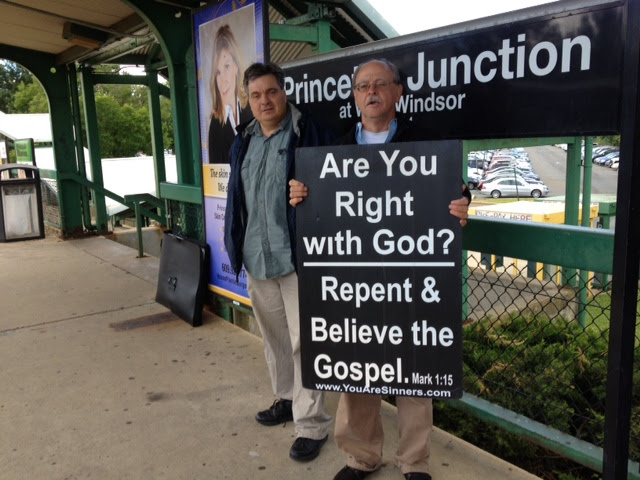 "Evangelist Found ‘Guilty’ of Trespassing for Preaching at Public Train Station to Appeal Ruling", at:

Christian Citizen Asked To Be Removed From City Hall By Anti-Christian Mayor of Newark, NJ, Cory Booker for Objecting to Gay Marriage:

Posted by John at 4:08 PM Links to this post

From the Lighthouse Trails Research newsletter is a very informative and revealing article about Jack Canfield's books:
See: http://www.lighthousetrailsresearch.com/newsletters/2013/newsletters20131104.htm.
Reprinted in full below unedited:

“Every religion I’ve looked at has some technology— … I’ve studied all of them and found what works for me and I’ve tried to make it available to others. What works for me is a combination of disciplines: I do yoga, tai chi which is a Chinese martial art and three kinds of meditation-vipasana, transcendental and mantra (sound) meditation. If you have to pick a yoga for me, I lean towards bhakii in the sense of devotion, adoration, singing, feeling love and joy exist in my heart.” Jack Canfield, (from Choosing To Be Happy)

The Chicken Soup Phenomenon
By Ray Yungen
Over the last two decades, a series of high profile, immensely successful books (500 million sold) have impacted the lives of many Christians. They are the Chicken Soup for the Soul books by Jack Canfield and Mark Victor Hansen. Although these books are filled with seemingly charming and uplifting stories, Canfield’s New Age spirituality is quite disturbing from a Christian viewpoint. In understanding the foundational views of these two authors, one must ask, “Can a corrupt tree bring forth good fruit” (Luke 6:43)?
In 1981, in the Science of Mind magazine, an interview revealed Canfield was no less than a teacher of the highly occultic “psychosynthesis” method developed by a direct disciple of Alice Bailey (see Bailey’s clear occultism and birthing of the term New Age in chapter two). In some of his most recent writings, Canfield openly reveals he had his “spiritual awakening” in a yoga class in college where he felt God “flowing” through all things.1 Hence, Canfield also promotes many occult writers.
In order to draw a conclusion on the spiritual persuasions of the Chicken Soup for the Soul authors take a look at one particular book they both enthusiastically endorse. The book is called Hot Chocolate for the Mystical Soul, compiled by Arielle Ford. Its format is identical to that of theChicken Soup for the Soul series—101 stories by different authors on a particular theme.
Ford’s book permeates with Eastern and New Age metaphysical content. A panoply of psychics, mediums, astrologers, channelers, and especially Hindu mystics present a wide array of stories. One such story is about a psychic who writes of her abilities.2 Another story in the book is about a Hindu holy man who manifests “holy ash” out of thin air.3 Yet another involves a man who claims to be the reincarnation of the apostle Paul and writes that the message of Jesus is “God dwells within each one of us [all humanity].”4
Co-author of the Chicken Soup for the Soul series, Mark Victor Hansen, agreed with Ford’s book so wholeheartedly that he wrote the foreword. Listen to a few excerpts from this foreword, which reveal Hansen’s view:

[E]nlightening stories will inspire you. They will expand your awareness, . . . you will think in new exciting and different ways . . . You will be renewed through the tools, techniques and strategies contained herein . . . May your mystical soul be united with the mystical magical tour you’ve been wanting and waiting for.”5
Jack Canfield echoes this praise on the back cover by stating, “They [the stories in the book] will change your beliefs, stretch your mind, open your heart and expand your consciousness.”6

In March 2005, Canfield came out with his book, The Success Principles. As can be expected, one of these success principles is about meditation. Canfield relates, “I attended a meditation retreat that permanently changed my entire life.”7 Canfield does a superb job of integrating metaphysics with the needs of business creativity. He emphasizes:

As you meditate and become more spiritually attuned, you can better discern and recognize the sound of your higher self or the voice of God speaking to you through words, images, and sensations.8

These books are selling like hotcakes in some evangelical bookstores because they are positive. If someone would have told me fourteen years ago that such books would someday be selling in Christian bookstores, I would have said they were nuts—no way!
Sadly, other such books have seeped into Christian bookstores. In one store, Sara Ban Breathnach’s book Simple Abundance, A Daybook of Comfort and Joy, was spotted under a sign, which read, “For Devotions.” In this book she informs her readers we are all “asleep to our divinity.”9 Yet, in spite of her obvious connection to the New Age, I have been told that women’s prayer groups at evangelical churches have ordered this book in bulk!
A vast number of Christians feel they are safe from being misled, simply because they have been professing Christians for so long. This is not the case at all. Considering today’s spiritual and social climate, both adults and young people desperately need keen spiritual discernment. As we move closer to the return of Christ, Scripture makes clear reference to the deluding spirits that will manifest themselves with increased intensity and effectiveness.
Notes:
1. Jack Canfield, Mark Victor Hansen, Dare to Win (New York, NY: Berkeley Books, 1994), p. 195.
2. Arielle Ford, Hot Chocolate for the Mystical Soul (New York, NY: Penguin Putnam, 1998), pp. 244-247, 361.
3. Ibid., p. 36-39.
4. Ibid., p. 15.
5. Ibid., pp. xiii-xiv.
6. Ibid., back cover.
7. Jack Canfield, The Success Principles (New York, NY: HarperCollins, 2005), p. 316.
8. Ibid., p. 317.
9. Sara Ban Breathnach, Simple Abundance: A Daybook of Comfort and Joy (New York, NY: Warner Books, 1995, October 31).
Posted by John at 3:25 PM Links to this post 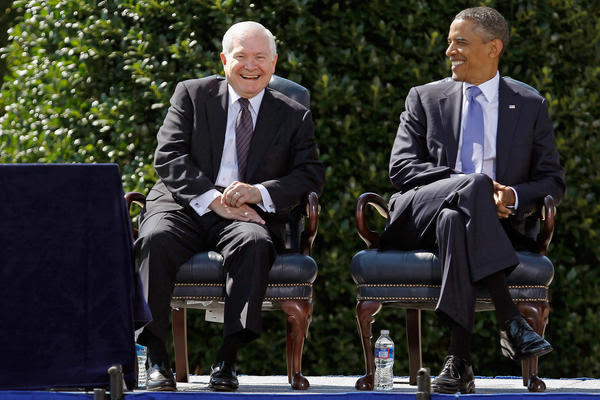 Pentagon Official Who Pushed for Repeal of

See:
http://christiannews.net/2013/10/31/pentagon-official-who-pushed-for-repeal-of-dont-ask-dont-tell-named-president-of-boy-scouts/.
Excerpt:
"During his tenure as Secretary of Defense, Gates advocated for the repeal of Don’t Ask, Don’t Tell–which barred open homosexuality in the military–and expressed his agreement with Obama’s push to do away with the law."
Posted by John at 3:16 PM Links to this post