THE DIVIDED ALLEGIANCE OF THE CHURCHES TO CHRIST AND THE STATE? THIS DUPLICITY MUST END! 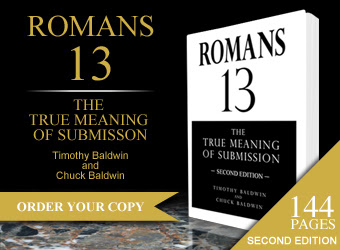 THE PHARISAICAL FEAR OF TODAY'S PASTORS:
John 11:48-"If we let him thus alone, all men will believe on him: and the Romans shall come and take away both our place and nation."


The Pharisees Are Still With Us -

VIDEO:
Pastors And Churches Violating First Commandment
by Chuck Baldwin,August 28, 2014
Republished below in full unedited for informational, educational, and research purposes from:
http://chuckbaldwinlive.com/Articles/tabid/109/ID/1224/Pastors-And-Churches-Violating-First-Commandment.aspx


I submit that these pastors--just as the Pharisees of old--who are rejecting the sovereign authority of Christ and bowing to the authority of Caesar (civil government) will, themselves, lose everything at the hands of the idol (civil government) to whom they so willingly submitted.
Thank God, many ministers and laymen alike are awakening to the idolatry of subjecting the Lord’s Church to the shackles and tyranny of the 501c3 tax code. More and more of the Lord’s people are seeking to escape from these government churches and are looking for real men of God who will not submit Christ’s authority to the state.
Accordingly, I have launched the Liberty Church Project in an attempt to help ministers and laymen establish non-501c3 churches and Christian fellowships. We will also be helping existing 501c3 churches become a free church. The early response is incredible! We are right now in the process of scheduling meetings all over the country.
Another exciting feature of this project is that we are having pastors who, themselves, want to become the shepherds of non-501c3 churches telling us, “I am willing to relocate to an area where Christian people want a pastor to help them build a non-501c3 church.” We have several such pastors right now who are willing to relocate to an area where people desire to have an independent, non-501c3 church.
It’s one thing to curse the cowardice of the government churches. It’s another thing to band together with fellow patriot-Christians and ministers and help build a liberty church, totally free from the shackles of the 501c3 leviathan. Yes, it will take work; and this is not a task for the careless and insincere.
But for those who are serious-minded and can put together a group of like-minded folks to help, I have a team of people in place; I have the materials; I have the ability and opportunity to travel across the nation and help people start and build liberty churches. So, if you are a disciple of the Lord Jesus, and you are tired of the government pastors and churches who refuse to take a stand, the Liberty Church Project is here to help you.
The first step is to go to the website and fill out the online application. That starts the process. It is a detailed application; and it is intended only for those folks who take this task seriously. It is a serious commitment for me and for the folks who are helping me. It must be equally serious for the folks who are asking us to come help them.
However, I am convinced that what is now but a trickle of water in a parched and dusty land will soon turn into a flood of spiritual renewal as the church is set free from the chains of state bondage. Folks, the answer will never come from the White House, no matter which party occupies it, but from the church house, where the Spirit of the living God resides.
If you, and a group of like minded folks, seriously desire a non-501c3 church, please fill out the online application. If you are a minister who would like to shepherd a non-501c3 church, fill out the online application. If you are a pastor of an establishment church and want help restoring the patriot pulpit and liberty church, fill out the application.
The online application is found here:
Liberty Church Project Application
Plus, I encourage you to keep an eye on the Liberty Church Project website for the dates and places of where we will be visiting, in case we may be coming to a location near you. We also have a growing list of people who are looking for a non-501c3 church in their area. You can add your location to the list, as well.
The Liberty Church Project website is here:
Liberty Church Project
With all of the dos and don’ts that our churches are teaching these days, it’s time that they start shouting from the rooftops this most fundamental of all commands, “Thou shalt have no other gods before me.” And that includes the god of civil government.

HISTRIONIC FUNDY PASTORS PLEASE NOTE: STOP TAKING ROMANS 13 OUT OF CONTEXT~HELPFUL COURSES FOR YOU WHO WERE ASLEEP IN YOUR HERMENEUTICS CLASS

HEY FUNDY PASTORS:
TIME TO REPENT OF WILLING IGNORANCE;
EXTRABIBLICAL HISTRIONICS IN THE PULPIT
IS BEST LEFT OUT IF YOU WANT TO BE BELIEVABLE;
INSINCERE MANIPULATION FALLS FLAT;
STAGECRAFT IS NOT CONVINCING:
FOR STARTERS, WE HEREBY OFFER THE MINI COURSE
ON THE CONSTITUTION & AMERICAN FOUNDING PRINCIPLES TO CHALLENGE YOUR WILLING IGNORANCE
& TO HELP YOU OVERCOME YOUR MORBID FEARS
OF LOSING YOUR TAX EXEMPT STATUS;
(P.S.: THE REALLY DIFFICULT COURSES ARE AVAILABLE,
BUT CAN BE CHARGED TO THE CHURCH UNDER
"PASTOR BENEFITS"(:>)

“Anyone who desires to be ignorant and free,
desires what never was and never will be.”
BY THOMAS JEFFERSON

ALL COURSE MATERIAL FROM THE INSTITUTE ON THE CONSTITUTION AT:
http://www.theamericanview.com/; AND
FACEBOOK:
https://www.facebook.com/InstituteontheConstitution?fref=photo
YOUTUBE CHANNEL:
https://www.youtube.com/user/TheAmericanView/featured

A) Introduction: What is The American View?: Michael Anthony Peroutka:

B) Will We Be Ignorant or Free?:

SEE: http://www.thenewamerican.com/tech/environment/item/19006-obama-plotting-to-bypass-congress-on-un-climate-regime;
EXCERPT:
The Obama administration, conspiring with the United Nations and various foreign governments, is plotting to foist a draconian “global-warming” regime on the American people — without ratification by a two-thirds majority of the U.S. Senate, as required by the Constitution for all treaties. The radical strategy primarily involves semantics and legal quackery: Instead of calling the controversial scheme a “treaty,” the White House is pursuing what it calls an international “accord.” If Congress does not step in to stop it, the global plot would ration emissions of carbon dioxide and energy while redistributing potentially trillions of dollars from Western taxpayers to Third World regimes. Globalists and alarmists hope to conclude the UN deal at a “climate” summit in Paris next year.
____________________________________________________________

Published on Jan 31, 2014
Leading up to the January 28th State of the Union Speech, Barack Obama and his spokesmen made statements to the effect that he plans to use his pen to sign executive orders to enact law on his own authority. He says he will do this because, in his view, Congress has not, or will not, pass certain legislation that he desires.
Based on this bald assertion of prerogative by Obama, articles of impeachment should be filed against him immediately...

False Premises - "I'll Do It Myself": Michael Anthony Peroutka:

Published on Aug 19, 2014
Barack Obama has repeatedly threatened that if Congress doesn’t give him his way on immigration and bailouts and Obamacare, he’ll just do it himself. After all, he’s got a pen and a phone.

Aside from the obvious separation of powers issue, all these “I'll do it myself" threats got me to thinking that maybe there is a common underlying and unspoken premise in play here.

The premise is that government – civil government – can actually do something to improve the economic vitality of the county, the state, the region and the country or the world.

Here’s the bad news – the premise is a false one.
https://www.youtube.com/watch?v=5pPAbPbxI3I