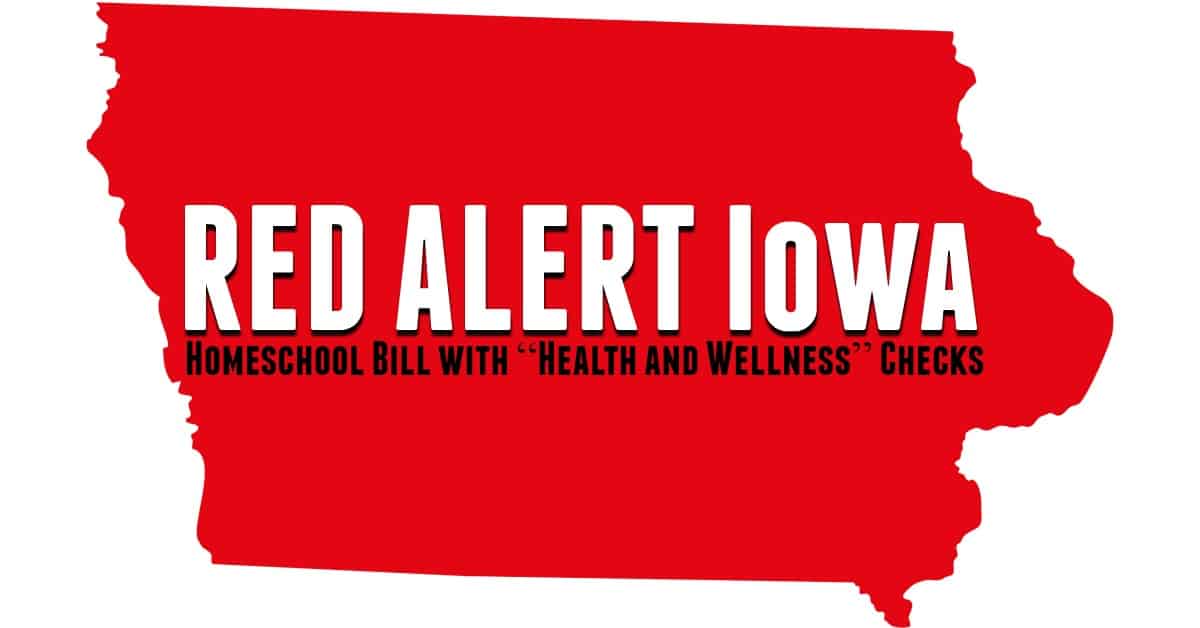 IOWA HOUSE BILL REQUIRES "HEALTH & WELLNESS" CHECKS OF HOMESCHOOLERS
HF 272 sponsored by State Representative Mary Mascher (D-Iowa City) requires school districts to perform quarterly home visits of their homeschooling families.
BY SHANE VANDER HART
SEE:https://caffeinatedthoughts.com/2019/02/iowa-house-bill-requires-health-and-wellness-checks-of-homeschoolers/; republished below in full unedited for informational, educational and research purposes:
Iowa House Democrats’ assault on homeschooling families in 2019 continues in the form of yet another bill. HF 272, sponsored by State Representative Mary Mascher (D-Iowa).
Unlike HF 182, another bill Mascher filed this session related to homeschooling, that eliminates independent private instruction HF 272 keeps the phrase “independent private instruction” in the Iowa Code, but requires families selecting that option to submit the same form that was required under competent private instruction.
Families who are providing independent private instruction for the first time would also be required to submit proof of their child’s required immunizations.
That is not the most egregious aspect of the bill. Similar to a bill suggested earlier this year by State Representative Art Staed (D-Cedar Rapids), HF 272 requires health and wellness checks of families who engage in independent private instruction or private instruction.
The bill reads, “The board of directors of a school district shall conduct quarterly home visits to check on the health and safety of children located within the district who are receiving independent private instruction or private instruction.”
The bill also states that these home visits “shall take place in the child’s residence with the consent of the parent, guardian, or legal custodian and an interview or observation of the child may be conducted.”
If parents do not provide consent then the school district “the juvenile court or district court upon a showing of probable cause may authorize the person making the home visit to enter the home and interview or observe the child.”
Exactly what would that probable cause look like? The bill does not say. It does state the person conducting the visit for the school district shall be considered a mandatory reporter. Also, the school district can collaborate with the Iowa Department of Human Services in performing the required home visits.
This bill essentially puts homeschooling families on the level of parents who have been accused or have had a finding of child abuse or neglect.
The bill drew sharp criticism from the Home School Legal Defense Association.
“Rep. Mascher’s HF 272, in addition to resurrecting long-dead paperwork requirements for homeschool families, treats them all like criminals. Without explaining who is going to pay for it—with school and child protective personnel already stretched beyond the breaking point—she wants to command that state agents come into the homes of every single homeschool family in the state four times a year.  In what world do we waste money poking into the homes of thousands of people when there is not the slightest reason to believe an individual has done anything wrong?  When people who believe that the government can, and should, solve all problems, this is the kind of utopian dream they dream.  Dreams like that only get us closer to an Orwellian world,” Scott Woodruff, senior counsel for HSLDA, told Caffeinated Thoughts.
The subcommittee assigned to HF 272 consists of State Representatives Mary Ann Hanusa (R-Council Bluffs), Sandy Salmon (R-Janesville), and Rastafari Smith (D-Waterloo).
Currently, Homeschool Iowa (Network of Iowa Christian Home Educators) has registered opposition to the bill. The Iowa State Education Association has registered support.
Update: There is an identical bill, HF 100, by State Representative Bruce Hunter (D-Des Moines) that was introduced late January. This bill was co-sponsored by State Representatives Mascher, Jeff Kurtz (D-Ft. Madison), and Vicki Lensing (D-Iowa City).
____________________________________________________________

VIDEO: JAMIE GLAZOV PRAISES ANNI CYRUS
SEE: https://www.jihadwatch.org/2019/02/video-jamie-glazov-praises-anni-cyrus; republished below in full unedited for informational, educational and research purposes:
In this new episode of The Glazov Gang, I Praise Anni Cyrus, honoring the producer of this show – a former child bride who is valiantly fighting for the victims of Sharia and Jihad.
Don’t miss it!
Order my new book: Jihadist Psychopath: How He Is Charming, Seducing, and Devouring Us.
Subscribe to the Glazov Gang‘s YouTube Channel and follow us on Twitter: @JamieGlazov.
Please donate through our Pay Pal account.
Posted by John at 5:16 PM

IN MUSLIM REP. ILHAN OMAR'S DISTRICT, "TALIBAN" & OTHER GANGS RUN WILD, SOMALI MUSLIMS
DON'T TALK TO POLICE
BY ROBERT SPENCER
SEE: https://www.jihadwatch.org/2019/02/in-muslim-rep-ilhan-omars-district-taliban-and-other-gangs-run-wild-somali-muslims-dont-talk-to-police; republished below in full unedited for informational, educational and research purposes:
They don’t talk to the police because they don’t trust them, because the police are not Muslims. The Qur’an teaches that Muslims are “the best of people” (3:110) and non-Muslims are “the most vile of created beings” (98:6). But no one will admit that is the cause, and so the police keep trying “outreach” programs to win them over. The result? Disasters such as the police career of Mohamed Noor. 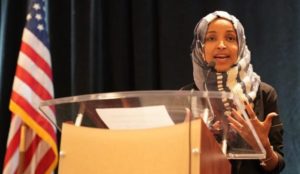 “Back in Omar’s district, police deal with gangs, relations with tight-lipped Somali community,” by Hollie McKay, Fox News, February 14, 2019 (thanks to Mark):

MINNEAPOLIS, Minn. – In the dead of the cold, late night on Tuesday, a young Somali man was shot in the hip. Someone took him to the local trauma center, left him there, and drove off.
The man told police at his bedside that he didn’t know who shot him, who took him to the hospital, or why he was targeted. “I’m intoxicated,” he told cops, while doctors tended his wound, before insisting he didn’t know anything else about what happened.
For the attending police officers, it was a frustrating, albeit familiar, response from a member of the Somali community, whose support in November sent one of their own, Rep. Ilhan Omar, to Congress. While Omar has spoken out frequently and forcefully on a range of issues – some that seem little connected to her district – most members of the Somali community she represents remain far more insular.
The national epidemic of shootings involving young African-American men in America’s cities certainly isn’t unique to Minneapolis. But some officers here believe issues of cultural assimilation involving the Somali immigrant community, and a struggle on both sides to better communicate law enforcement’s mandate to protect and serve, makes it a particularly imposing challenge. One that politicians like Omar, they say, could do much more to effectively address.
“When they come here, they come with their own experiences of not trusting the police, and from a place where the police are known to be corrupt. And the challenge for us lies in trying to get them to cooperate,” said one law enforcement officer. “They’ll often call 911 when they need help. But when we come, they often won’t then tell us who is causing the problem so we can take action or stop the crime from happening again.”
“Our goal is to have a good relationship with the community, we try to engage but it’s proving to be a tough egg to crack,” another officer underscored.
According to data compiled last year by the Washington Post, more than half of all homicides statewide in Minnesota go unsolved. And that’s in part because Somali-Americans in Minneapolis aren’t talking enough to police, according to officers.
The Somali community grew here rapidly here during the 1990s, when large numbers of Somalis fled a devastating civil war. The community has since grown with the addition of U.S.-born children of those refugees – as has the debate over the Somalis’ desire and ability to culturally assimilate.
Minnesota is now home to one the largest Somali communities in the global diaspora, with an estimated 100,000 living in the Minneapolis-St. Paul area. The Cedar-Riverside neighborhood is the center of the Somali community – and is fondly nicknamed “Little Mogadishu” – for its array of Somali-centered organizations, businesses, and mosques.
Last year, it was announced that massive security upgrades totaling some $825,000 were coming to the major government-funded apartment complex in Cedar-Riverside, to “address resident safety concerns.” Part of the plan was to place a six-foot perimeter fence at the Cedar High Apartments, a complex owned and managed by Minneapolis Public Housing Authority, and for many, the central meeting point for the community.
While supported by some, others expressed their concerns the fence would only further isolate the Somali population, and hinder their ability to work with them and make the area safer.
Some investigators lament the difficulties in rooting out gang violence that remains a problem in not just the Somali community, but neighboring areas. The proper dismantling of the gangs, police stress, is a two-way street. Gang activity now is no longer centered on larger outfits like MS-13, or the Crips. Much more common here are smaller gangs with names like “Somali Mafia,” “Somali Outlaws,” “Young n’ Thuggin (YNT)” and even the “Taliban.”
“It’s hard for any community to assimilate and to immediately transform from the life they knew. But the distrust is only getting worse,” said an area law enforcement official. “The gang violence is only getting worse. Not only do crimes go unsolved, but many don’t get reported at all.”
But Jeanine Brudenell, the former Minneapolis Police Department’s Somali liaison officer, who retired in 2017, believes gang violence has waned somewhat. She acknowledged that while the “huge fear of police and government” has made efforts to protect the community, the right steps are being put in place in terms of community relations.
In recent years, the Minneapolis Police Department (MPD) has sought to do more community outreach, and bring into the fold more Somali officers. The department currently has eight ethnic Somalis serving as officers.
“The City of Minneapolis has the largest Somali population, per capita, in the United States. The Minneapolis Police Department strongly believes that a police department that reflects the community it serves is an important first step in building trust,” John Elder, Minneapolis Police Department Public Information Officer told Fox News. “When Somali residents see officers that look like them, on patrol and detectives in investigation units, they are more likely have the confidence the MPD will understand their culture and background.”…