NOTICE:
PARDON THE CONDITION OF THIS POST; GOOGLE AND OBAMA'S ENABLERS ARE MESSING UP THE LAYOUT, VIDEOS, TEXT: 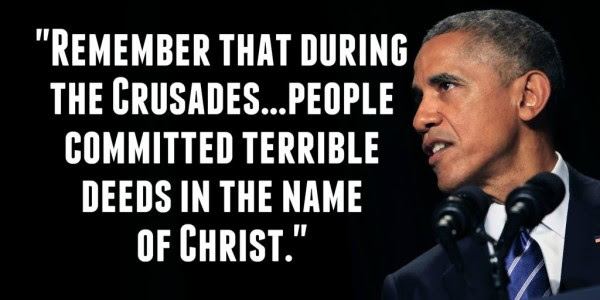 WHAT THE MEDIA FAILED TO MENTION AS A RETORT:
DURING HIS TENURE AS THE SO-CALLED "PASTOR IN CHIEF", HE IS RESPONSIBLE FOR THE ATROCITIES OF ABORTION, GAY RIGHTS, ILLEGAL IMMIGRATION, UNILATERAL EXECUTIVE ORDERS, THE CREATION OF A POLICE STATE, AND ALL OTHER SOCIALIST INITIATIVES THAT ARE ANTI-CHRISTIAN AND/OR PRO-MUSLIM.

SEE: http://the-trumpet-online.com/anti-christian-obama-starting-point-faith-doubt/
Republished below in full unedited for informational, educational, and research purposes:

"President Barack Obama sparked outrage among American Christians on Thursday when he decided to use the National Prayer Breakfast as a forum to lecture Christians not to get on their “high horse” in the wake of the burning of a caged live Jordanian pilot by Islamic State (ISIS) terrorists.

IGNORANCE OF HISTORY:
SEE: http://allenbwest.com/2015/02/obama-revealed-true-colors-prayer-breakfast-true-ignorance-history/
"There is grave danger in statements supporting moral equivalency and religious relativism. What happens is horrific behavior is excused because you have a certain recalcitrance in admitting the existence of evil.
President Barack Obama had the chance to affirm our Judeo-Christian faith heritage at the National Prayer Breakfast just days after the world was exposed to the savage and barbaric actions of ISIS in the burning to death of the captured Jordanian fighter pilot. But he did not.
As we reported yesterday, instead the Islamapologist-in-Chief attempted to find moral equivalency between the brutality of ISIS and Christianity, saying that violence rooted in religion isn’t exclusive to Islam, but has been carried out by Christians as well.
“Unless we get on our high horse and think this is unique to some other place, remember that during the Crusades and the Inquisition, people committed terrible deeds in the name of Christ,” Obama said. “In our home country, slavery and Jim Crow all too often was justified in the name of Christ.”"
_______________________________________________________

"Talking about “faith being twisted and distorted,” Obama condemned the Islamic State jihadists as a “brutal, vicious death cult” and cited various Muslim terrorist acts as examples of using “religion” for nefarious ends. He then also said, however, “And lest we get on our high horse and think this is unique to some other place, remember that during the Crusades and the Inquisition, people committed terrible deeds in the name of Christ.”
The irony of citing the Crusades to balance criticism of Islamic jihad is that the Crusades were expressly designed as a defense against Islamic jihad. Unbeknownst to most, when Islam was born in 622 A.D., Christianity was the dominant religion in the Middle East and North Africa, with the latter having more Christians than Europe. So what happened?
The sword of Islam happened.
Beginning in 630, the Muslim hordes began their invasions; conquering the old Christian lands in short order, they swept through North Africa and then pushed into Iberia (present-day Spain and Portugal) and Gaul (France now). This incursion into Europe was finally halted at the Battle of Tours in 732, but the Muslims’ expansion would continue elsewhere for hundreds or years. And in 1095 they were attacking from the East, poised to move west into Greece itself or north into the Balkans — the “back door” of Europe."
________________________________________________________


at Prayer Breakfast: Without Christ,

You Will Go to Hell

“I got down off my high horse [and] got down on my knees. And Dr. Cortez Cooper and Stevie and I prayed that the Lord would come into my life and forgive me of my sins, and be my lord and savior,” he recalled. “And that was the greatest day of my life. That changed everything.”
Waltrip told his wife that night as they drove home that he felt like a “new man” and that he had been born again.
“When the Lord comes into your life, you’re going to be different. You have to be different,” he declared to those gathered. “If He comes into your life and you’re not different, you better go back and try it again, because the Lord changes you.”

his true colors at Prayer Breakfast, and true ignorance of history

Posted by John at 8:12 AM Links to this post