MAY THE DE FACTO EXECUTIONER UK PM THERESA MAY BLOCKED ASYLUM FOR ACCUSED CHRISTIAN PAKISTANI "BLASPHEMER" ASIA BIBI
OVER HOME SECRETARY'S OBJECTION,
TO APPEASE MUSLIMS
BY ROBERT SPENCER
SEE: https://www.jihadwatch.org/2018/11/uk-pm-personally-blocked-asylum-for-accused-blasphemer-asia-bibi-over-home-secretarys-objection-to-appease-muslims;
If there are any free people in Britain in future generations, they will curse the name of Theresa May, whose misrule is rapidly leading the nation to ruin. She won’t let in Asia Bibi, for fear that Muslims will be angry. So it is clear who is in charge in Britain now. The British government routinely bans foes of jihad terror and critics of Islam, while letting in jihadis. The Home Office recently banned Martin Sellner, Brittany Pettibone, Lauren Southern and Lutz Bachmann from entering, all for the crime of opposing jihad terror and Sharia oppression, and thereby made it clear that it is more authoritarian and unwilling to uphold the freedom of speech than ever – at least when it comes to criticism of Islam, Muslim rape gangs, and mass Muslim migration.
Even worse, the bannings of Sellner, Pettibone, Southern, and Bachmann were just part of a long pattern. Pamela Geller and I were banned from entering Britain in 2013, apparently for life, also for the crime of telling the truth about Islam and jihad. Just days after Geller and I were banned, the British government admitted Saudi Sheikh Mohammed al-Arefe. Al-Arefe has said: “Devotion to jihad for the sake of Allah, and the desire to shed blood, to smash skulls, and to sever limbs for the sake of Allah and in defense of His religion, is, undoubtedly, an honor for the believer. Allah said that if a man fights the infidels, the infidels will be unable to prepare to fight.”
And Syed Muzaffar Shah Qadri’s preaching of hatred and jihad violence was so hardline that he was banned from preaching in Pakistan, but the UK Home Office welcomed him into Britain.
The UK Home Office also admitted Shaykh Hamza Sodagar into the country, despite the fact that he has said: “If there’s homosexual men, the punishment is one of five things. One – the easiest one maybe – chop their head off, that’s the easiest. Second – burn them to death. Third – throw ’em off a cliff. Fourth – tear down a wall on them so they die under that. Fifth – a combination of the above.”
Theresa May’s relentlessly appeasement-minded government also admitted two jihad preachers who had praised the murderer of a foe of Pakistan’s blasphemy laws. One of them was welcomed by the Archbishop of Canterbury. Meanwhile, the UK banned three bishops from areas of Iraq and Syria where Christians are persecuted from entering the country. 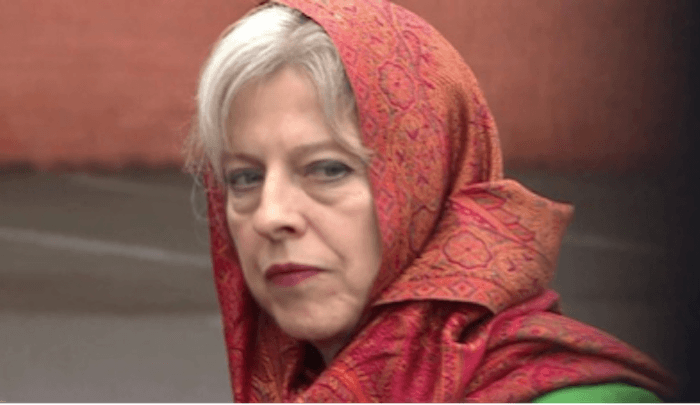 “Revealed: Theresa May ‘blocked asylum application from Pakistani Christian’ locked up for blasphemy despite UK playing host to hijackers, extremists and rapists,” by Glen Owen and Abul Taher, The Mail on Sunday, November 24, 2018 (thanks to The Religion of Peace):


Theresa May has been accused of refusing asylum to a Christian mother who is being hunted by lynch mobs in Pakistan.
The fate of Asia Bibi has pitted Home Secretary Sajid Javid against the Prime Minister, with Mr Javid arguing passionately that she should be given refuge in the UK.
But sources say that his plan was thwarted after Ms May was persuaded that letting Bibi claim asylum here would ‘stoke tensions’ among British Muslims….
Our investigation reveals that on the day she was seized by villagers and accused of blasphemy she was paraded through her village with a leather noose around her neck, beaten with sticks by a baying mob during a ‘court’ hearing and told that her life would be spared only if she converted to Islam.
Bibi’s conviction was quashed last month following eight years in solitary confinement after Pakistan’s Supreme Court said the case was based on ‘inconsistent’ evidence.
The acquittal prompted days of demonstrations by thousands of hardline Islamists who demanded she be hanged. Ms Bibi is now in hiding after Imran Khan’s government agreed to allow a petition against the court’s decision as part of a deal to halt the protests….
A senior Government source said: ‘Sajid was very sceptical about the official advice, and pushed hard for her to be given asylum here. It eventually landed on the Prime Minister’s desk, but she just followed the advice of the officials’….
Ms Bibi was harvesting berries in 2009 when her Muslim co-workers accused her of being unclean, prompting an argument and allegations Ms Bibi blasphemed against Islam, which she strongly denies.
This newspaper has pieced together the terrifying sequence of events which followed: she was taken to a makeshift sharia court and flung at the feet of an imam, who told her: ‘You know what happens to people who insult the Prophet. You can redeem yourself by accepting Islam.’
Asia declined as the crowd began jeering and spitting. She was then whipped with sticks and sandals, leaving her bleeding and semi-conscious. Her life was only saved when a teacher intervened, saying she should be handed over to police.
The Foreign Office said: ‘The UK’s primary concern is for the safety of Asia Bibi and her family. A number of countries are in discussions to provide a safe destination’….