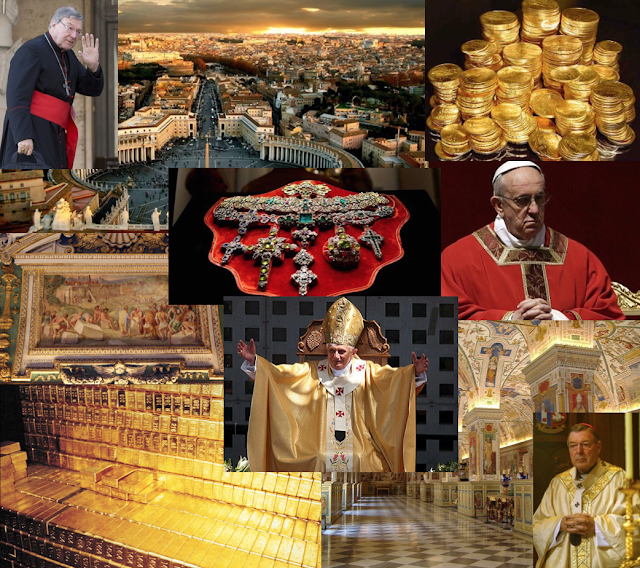 COMMIE POPE SAYS WEALTH OF THE RICH "BELONGS TO ALL" & "POVERTY IS CAUSED BY INJUSTICE"
SEE: https://pulpitandpen.org/2018/11/19/commie-pope-says-wealth-of-the-rich-belongs-to-all-and-poverty-is-caused-by-injustice/;
republished below in full unedited for informational, educational and research purposes:
Thou shalt not steal. – Exodus 20:15
Pope Francis, who pretty much anyone with an understanding of economics recognizes is an unapologetic Communist, claimed over the weekend that what belongs to the “wealthy few” belongs, “in justice, to all.” This follows on the heels of a confession from American director, Michael Moore, that Pope Francis told him that “Capitalism is a sin.” Now, it seems the Pontiff is arguing that the wealth of rich should be “in justice” distributed to everyone else.
According to the Associated Press, championing the cause of the poor, Pope Francis on Sunday lamented that “the wealthy few” enjoy what, “in justice, belongs to all” and said Christians cannot remain indifferent to the growing cries of the exploited and the indigent, including migrants.
Stealing the private property of the rich and giving it to the poor is not “in justice,” as the Pope suggests, but is injustice.
Francis invited about 6,000 poor people to St. Peter’s Basilica to celebrate Mass. Later, the Pope invited 1,500 of the poor to eat lasagna, chicken, mashed potatoes and tiramisu.
It is here, according to the AP, that Francis went full-Commie in his homily, “He also drew attention to the plight of abandoned elderly, the friendless and the cry of all those forced to flee their homes and native land for an uncertain future. It is the cry of entire peoples, deprived even of the great natural resources at their disposal.”
Francis said the poor were weeping “while the wealthy few feast on what, in justice, belongs to all. Injustice is the perverse root of poverty.”
Poverty, of course, is caused by any number of root causes. These root causes of poverty include providential misfortune and slothfulness. While injustice is listed as a possible cause of poverty, the Scripture speaks far more of slothfulness as to blame for the estate of the poor.


Lazy hands make for poverty, but diligent hands bring wealth (Proverbs 10:4)
The plans of the diligent bring plenty, as surely as haste leads to poverty (Proverbs 21:5)
The slacker craves, yet gets nothing, but the soul of the diligent is fully satisfied (Proverbs 13:4)

God’s providence is also responsible for the wealthy and impoverished.

The LORD makes poor and makes rich; he brings low and he exalts (1 Samuel 2:7).
But remember that it is the LORD your God who gives you the power to gain wealth, in order to confirm His covenant that He swore to your fathers, as it is this day (Deuteronomy 8:18).
“Naked I came from my mother’s womb, and naked I shall return. The LORD gave, and the LORD has taken away. Blessed be the name of the LORD” (Job 1:21)

The Pope’s remarks make clear that he believes the Marxist premise that the primary cause of poverty is systemic injustice.
According to news reports, the Vatican’s wealth is purported to be approximately 15 billion dollars in liquid assets. That’s only the Catholic Church’s capital city. The Catholic Church in America has an operating budget of – get this – 170 billion per year. They give less than 3% of that to the poor and needy. Now, imagine what the Catholic church is worth worldwide. The church owns more than 716 million kilometers of land worldwide, for places like cathedrals, nunneries, monasteries, and embassies (that is roughly the size of Alberta, Canada). The Holy See holds onto 22 million dollars worth of gold just for its ornaments. In modern dollars, St. Peter’s Basillica – where Francis gathered the poor – would cost about 8.2 billion dollars today to construct.
If Francis had liquidated the value of St. Peter’s Basilica (no shortage of world despots would love to buy the facility) for its fair market value, the six-thousand impoverished worshippers could each have been given $1,366,000 a piece. Or to think of it another way, the gold-covered cathedral could have fed every impoverished Italian for a year. A complete liquidation of the Catholic Church’s wealth would eradicate hunger and all treatable diseases in the Third World. For some reason, Pope Francis only wants to redistribute the wealth of others.