GERMANY: POLICE TO PROSECUTE MOTHER FOR POSTING PHOTO OF HER DAUGHTER'S SEX ATTACKER ON FACEBOOK

GERMANY: POLICE TO PROSECUTE MOTHER FOR POSTING PHOTO OF HER DAUGHTER'S SEX ATTACKER ON FACEBOOK
BY ROBERT SPENCER
SEE: https://www.jihadwatch.org/2018/11/germany-police-to-prosecute-mother-for-posting-photo-of-her-daughters-sex-attacker-on-facebook;
republished below in full unedited for informational, educational and research purposes:

A sexual assault by a migrant? Get used to it. Posting a photo of the migrant perpetrator? A serious crime, warranting prosecution. Danke, Merkel! 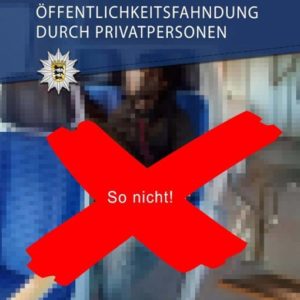 
German police stopped a mother from searching for the alleged sexual molester of her 12-year-old daughter on Facebook.
Her post was soon shared thousands of times containing pictures of a black man. The post did not go into further detail other than asking if people knew this man.
The man supposedly sexually molested her daughter on a train from Freiburg to Schiengen on Sunday. A police spokesperson confirmed the incident and that further steps will be taken.
The police gave reasons of protecting the victim and the ongoing investigation not to elaborate further. On Monday morning the police posted a strongly censored picture of the original post with lettering reading: “Not like this!”
The police further stated that the release of picture without the consent of the pictured person is a crime and will be prosecuted….