POPE AND GRAND IMAM JOIN HANDS FOR WORLD PEACE; CONTINUE ON THE PATH TO A ONE WORLD APOSTATE RELIGION 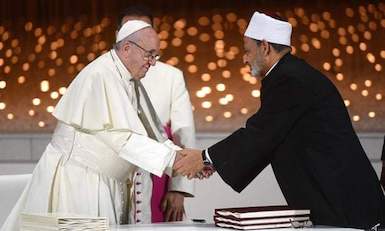 The Exclusive Gospel in a Pluralistic Culture
BY MIKE GENDRON OF PROCLAIMING THE GOSPEL.ORG

Claims of exclusivity are often met with great resistance in societies where different religious paths are accepted as equally valid. Christians who communicate the exclusivity of their faith will experience this in a variety of ways. They are either dismissed, ridiculed, mocked, or considered intolerant. These responses to the Gospel have been occurring for 2000 years. Paul wrote: "we preach Christ crucified, to Jews a stumbling block and to Gentiles foolishness" (1 Cor. 1:23).
Why is there so much antagonism toward the Gospel of Jesus Christ? It is because people do not want to be told there is only one way to heaven in a society deeply influenced by pluralism and postmodernism. Yet when it comes to the Gospel, Christians must contend for its purity and exclusivity (Gal. 1:6-9). The call for ecumenical unity among all "professing Christians" must be met with determined opposition. We know that "truth" is exclusive and cannot be compromised because "No lie is of the truth" (1 John 2:21). Truth is as incompatible with error as light is with darkness. Any teaching which contradicts or opposes biblical truth is false, and it must be exposed for what it is. As Christians, we cannot be passive or indifferent towards any distortion of the Gospel. We must contend earnestly for the faith (Jude 3).

The Gospel is exclusive because it is about only one Person and two historical events (1 Cor. 15:1-4). It reveals the good news of man's redemption, which was accomplished by the eternal Son of God incarnate, through His atoning sacrificial death and glorious resurrection from the dead. The Gospel is a unique and eternal message (Rev. 14:6). It is the same message for every generation and must be proclaimed, protected and defended.

Only One Savior
The apostle Peter proclaimed this exclusive statement to an already hostile audience: "There is salvation in no one else; for there is no other name under heaven that has been given among men by which we must be saved" (Acts 4:12).

Only One Mediator
The apostle Paul made this exclusive declaration: "For there is one God, and one mediator also between God and men, the man Christ Jesus" (1 Tim. 2:5).

Only One Source of Eternal Life
The apostle John declared: "God has given us eternal life, and this life is in His Son. He who has the Son has the life; he who does not have the Son of God does not have the life" (1 John 5:11-12). John also said, "He who believes in the Son has eternal life; but he who does not obey the Son will not see life, but the wrath of God abides on him" (John 3:36).

Only One Exemption from Judgment
Jesus satisfied divine justice as the sinless substitute for all believers. "He who believes in Him is not judged; he who does not believe has been judged already, because he has not believed in the name of the only begotten Son of God" (John 3:18).

The Gospel is also exclusive because it is the only message with the divine power and promises to reverse the curse of sin (Rom. 1:16; 8:21). God's Word makes these exclusive promises to anyone who repents and believes the Gospel.

How can Christians communicate the exclusivity of the Gospel effectively in our religiously pluralistic society? We need to understand that the Gospel is offensive to those who are offensive to God. It humbles people under the sovereign hand of God and strips them of their own righteousness. We must tell them they have broken God's law, they are condemned by God's justice, they deserve God's wrath, they need God's mercy, and their only hope is God's Son.
Posted by John at 4:10 PM