BY KELEN MCBREEN
SEE: https://www.infowars.com/twitter-now-enforcing-sharia-law-on-americans/; republished below in full unedited for informational, educational and research purposes:
Conservative commentator Michelle Malkin received a notice from Twitter’s legal team Wednesday, warning that she may wish to seek legal counsel over a four-year-old tweet the social media site says “is in violation of Pakistani law.”
“Here’s the notice Twitter’s legal dept sent me last week, warning me to get legal counsel because anti-blasphemy Muslim zealots complained that my Mohammed Cartoons tweet violates Pakistan’s laws,” Malkin wrote.


In defiance of Pakistani law and in support of free speech, see the forbidden images below. 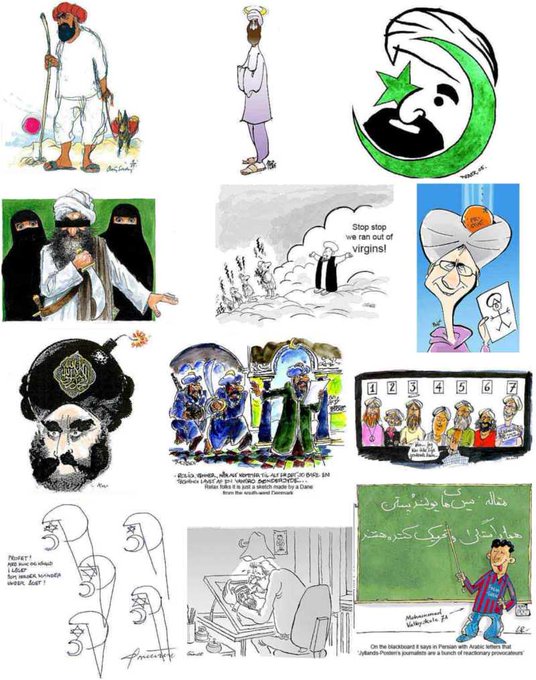 
This is only the latest example of blatant hypocrisy from Twitter as conservatives are disproportionately targeted while pornography, death threats and other clear violations of the site’s terms of service are ignored.
Malkin isn’t the only one being targeted as multiple Twitter users have recently been contacted by Twitter’s legal team regarding posts about Islam.
In an interview with Big League Politics, Malkin explained, “Over the past few months, several other prominent critics of Islamic extremism have received similar warning letters from Twitter’s legal department, including Saudi-Canadian activist Ensaf Haidar, the wife of imprisoned Saudi blogger Raif Badawi; Imam Mohammad Tawhidi, an Iranian-born Muslim scholar and reform advocate from Australia; Jamie Glazov, a Russian-born Canadian columnist who just released a new book called “Jihadist Psychopath”; and Pamela Geller, an anti-jihad blogger and activist.”
In November of 2018, conservative activist Laura Loomer was banned from Twitter for criticizing Muslim Democrat Ilhan Omar’s support of female genital mutilation.
Malkin could be the next conservative to be permanently kicked off the platform as she is refusing to cower to the site’s intimidation tactics.
She writes, “As a US citizen subject to AMERICA’S laws—NOT Pakistan’s or Mohammed’s—I’ll now retweet my Mo cartoons & columns to 2.1 million followers every day & stand with free speech & free thought.”

Replying to @michellemalkin and 3 others
As a US citizen subject to AMERICA'S laws—NOT Pakistan’s or Mohammed’s—I’ll now retweet my Mo cartoons & columns to 2.1 million followers every day & stand with free speech & free thought. How about you, @Twitter @jack?http://michellemalkin.com/2015/01/09/the-mohammed-cartoons-and-other-riot-inducing-images/ …#FuckSharia pic.twitter.com/ZLFLMcVvZp

6,228 people are talking about this

Replying to @michellemalkin and 2 others
I have written to Twitter's legal & media relations departments seeking answers and comment on why American citizens who use their service are now subject to Pakistan's oppressive anti-blasphemy laws. No response yet - hi @jack can you respond==>#SiliconValleySharia pic.twitter.com/aApeMTYR5d

3,187 people are talking about this


Share this article to show big tech that Americans won’t be bullied into submission and that the First Amendment is still alive.
On the topic of internet censorship, Project Veritas’ James O’Keefe joined the Alex Jones Show Wednesday to promote a recent video exposing Facebook’s anti-free speech agenda.
Posted by John at 2:31 PM