OCASIO-CORTEZ & YOUNG RADICALS FIRMLY CONTROL DEMOCRATIC PARTY
BY R. CORT KIRKWOOD
SEE: https://www.thenewamerican.com/usnews/politics/item/31612-ocasio-cortez-young-radicals-firmly-control-democratic-party?vsmaid=3628&vcid=3987;
republished below in full unedited for informational, educational and research purposes:
It appears that what remains of the moderate wing of the Democratic Party is dead. Or at least has no voice.
The party of abortion, sodomy, and socialism is now under the firm control, apparently, of a 29-year-old former bartender who proclaims herself a democratic socialist and already shows signs of the totalitarian impulses so common to her ilk.
Such is the iron control the party’s radicals have achieved that an old party hand cannot even say something nice about a Republican, as Joe Biden learned the other day. He said Vice President Pence was a “decent guy.” It was a big mistake.
Upshot? The GOP better stiffen its spine to fight these totalitarian central planners.
No Voting With the GOP. Period.
According to the Washington Post, moderates in the Democratic Party received marching orders yesterday: Shut up and do what you’re told, or face the equivalent of a firing squad.
“House Democrats exploded in recriminations Thursday over moderates bucking the party, with liberal Rep. Alexandria Ocasio-Cortez threatening to put those voting with Republicans ‘on a list’ for a primary challenge,” the Post reported.
And House Speaker Nancy Pelosi, the elderly leftist from California, agrees. “We are either a team or we’re not,” she warned, the Post reported.
Ocasio-Cortez, the face that launched a thousand Facebook memes, threatened party moderates with exile. “Corbin Trent, a spokesman for Ocasio-Cortez,” the Post reported, “said she told her colleagues that Democrats who side with Republicans ‘are putting themselves on a list.’”
Ocasio-Cortez issued a not-so-subtle Stalinist threat, the Post reported, after the GOP outfoxed Democrats on an amendment to a bill that would expand federal background checks before one can purchase a firearm.
That amendment, defeated in committee, required Immigrations and Customs Enforcement to be notified if an illegal alien tried to purchase a firearm. Using a motion to recommit, which gives the minority party a last shot at amending a bill, Republicans reintroduced it on the floor, where 26 Democrats helped pass it.
“That infuriated liberals who have railed against ICE’s role in conducting mass deportations and embarrassed Democratic leaders who couldn’t keep their members in line on a high-profile bill,” the Post reported.
Thus, Ocasio-Cortez’s spokesman told the Post, “she said that when activists ask her why she had to vote for a gun safety bill that also further empowers an agency that forcibly injects kids with psychotropic drugs, they’re going to want a list of names and she’s going to give it to them.”
The problem for Pelosi and her colleague from New York 14? Democratic Congressmen from pro-Trump districts. Those moderates “insist they are not going to be dissuaded from voting with their districts, and many are warning that majority control is at stake.”
Reported the Post:
Inside the Democratic meeting, one of those freshmen — Rep. Xochitl Torres Small (N.M.) — reacted sharply to Ocasio-Cortez’s comments and rose to urge her colleagues to respect the political reality of representing a swing district, according to multiple people present....
Publicly and privately, Pelosi has urged members to treat the Republican motions as procedural feints that should be routinely ignored. “Vote no — just vote no,” she told reporters Thursday, “because the fact is, a vote yes is to give leverage to the other side.” But [Representative Steny] Hoyer and [Representative James] Clyburn believe that is untenable when Republicans stand ready to use those votes as political cudgels against vulnerable Democrats.
Say Nothing Nice
How much control do party radicals have over the party’s elderly leaders?
The Hill reported yesterday that former Vice President Joe Biden, still contemplating a run for president, permitted a left-wing lesbian to upbraid him for calling Vice President Mike Pence a “decent guy.” Biden was speaking at a foreign policy forum in Nebraska.
The reprimand came from failed gubernatorial candidate Cynthia Nixon, one of the stars of Sex in the City, a pornographic television program about the sexual adventures of four women in New York City.
“@JoeBiden you’ve just called America’s most anti-LGBT elected leader ‘a decent guy,’” she tweeted. “Please consider how this falls on the ears of our community.”
Like an old man afraid his kids would put him in a nursing home if he didn’t mind them, Biden quickly gave in.
You’re right, Cynthia. I was making a point in a foreign policy context, that under normal circumstances a Vice President wouldn’t be given a silent reaction on the world stage.
But there is nothing decent about being anti-LGBTQ rights, and that includes the Vice President.
__________________________________________________________ 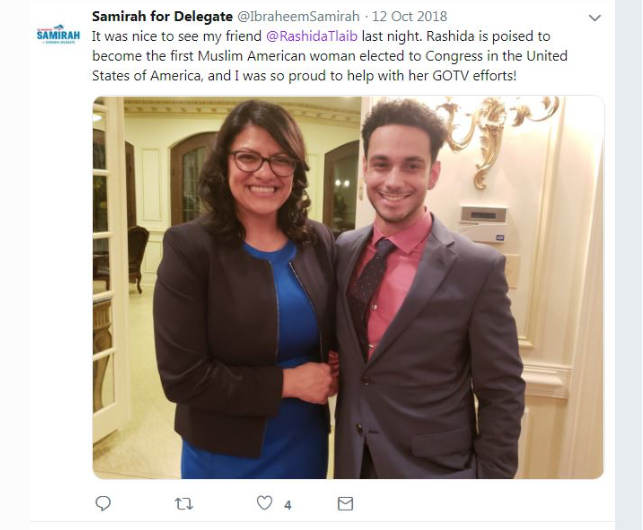 Virginia Democratic Candidate's Anti-Semitic Diatribe Has a Radical Past