MUSLIM REP. RASHIDA TLAIB TO SPEAK ALONG WITH ANTI-SEMITIC IMAM AT HAMAS-LINKED CAIR EVENT
BY ROBERT SPENCER
SEE: https://www.jihadwatch.org/2019/02/muslim-rep-rashida-tlaib-to-speak-along-with-anti-semitic-imam-at-hamas-linked-cair-event; republished below in full unedited for informational, educational and research purposes:
It’s no surprise that this is where Tlaib’s sympathies lie. The worst aspect of this is that Tlaib will suffer no consequences whatsoever for associating with Hamas-linked CAIR or her fellow anti-Semite Omar Suleiman, who is the imam responsible for compelling Google to bury all content critical of Islam.
For the Left and the Democrats today, Jew-hatred is mainstream, and Hamas is an ally. 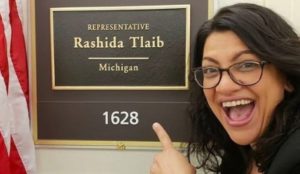 Rep. Rashida Tlaib, D-Mich., a self-proclaimed liberal progressive, will speak alongside an extremist imam at an event hosted by the Michigan chapter of the terror-tied Council on American Islamic Relations (CAIR) next month. The Hamas-connected outfit is infamously known for being labeled an unindicted co-conspirator in the largest terrorism financing case in U.S. history.
On March 17, Rep. Tlaib will join Omar Suleiman, a Muslim Brotherhood-linked imam who has a long history of anti-LGBT, anti-woman, and anti-Semitic remarks, at the fundraising event in Detroit. Tickets will cost $50 per person, or $500 to reserve a table.
Imam Suleiman has referred to homosexuality as a “disease” and a “repugnant shameless sin” that he believes is justifiable to punish by death. Additionally, the radical imam has endorsed mandatory hijabs for all women, even when they are around family members. In a 2012 sermon, he warned that women who do not wear a full hijab risk an incestous relationship with their family members. In that address, he added that women who commit adultery run the risk of being honor-killed by their family members, without condemning the practice of honor killing. On the foreign policy front, Suleiman regularly cheers on Hamas-led violent Islamist uprisings against Israel in calling for the elimination of the Jewish state.
Dawud Walid, the longtime CAIR-Michigan director who is presiding over the event, also has a long history of extremist rhetoric. At a 2012 sermon at a mosque in Michigan, he described Jews as enemies of Islam who have “incurred the wrath of Allah.” Moreover, Walid has endorsed blasphemy laws that call for violent repercussions for engaging in criticism of Islam or Muhammad….
Tlaib has become a regular on the CAIR circuit. In February, she headlined a CAIR-Chicago fundraiser. In January, she spoke at a CAIR event in which she was introduced by an avowed supporter of the U.S.-designated terrorist organization Hamas….