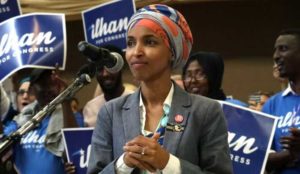 
For 181 years, you haven’t been able to wear head coverings on the floor of the House of Representatives. Now, however, after the election of the first hijab-wearing Muslim representative, that’s about to be changed.
According to the New York Post, the election of Minnesota’s Ilhan Omar will put an end to a rule that was originally meant to differentiate Congress from British Parliament.
Parlimentarians had a tradition of wearing hats on the floor of Westminster. Given that we took up coffee as our national beverage (and even threw that dastardly tea over the sides of some ships in Boston Harbor) to let the British know how we felt about their institutions, banning hats only seemed to come naturally.
However, in the age of Ilhan Omar, that’s changing.
“There are those kinds of policies that oftentimes get created because people who have blind spots are in positions of influence and positions of power,” Omar said Thursday.
“I think it will be really exciting to see the stuff that we notice within the rules that don’t work for a modern-day America.”…
There have been numerous changes to dress code in Congress over the years; women were forbidden to wear pants on the floor until 1993, and bare arms were first allowed under Paul Ryan’s speakership.
So, the times they do a-change when it comes to congressional styles. However, the aforementioned rules were based around gender biases and the norms of the era; there wasn’t any real or symbolic reasoning behind them. In this case, it isn’t quite that simple.

As the House’s website notes, proposals to ban head coverings dated back to 1822. In 1833, future president James K. Polk proposed that the House “provide that the members should sit in the House uncovered, unless under special leave of the Speaker.”
Others pointed out “the symbolic value of the tradition, noting that members of the British House of Commons wore hats during debate to symbolize that body’s independence from the King of England.”
Of course, the case could be made that a religious argument against it could have existed since 1845, when Lewis Charles Levin became the first Jewish man elected to Congress.
Granted, Levin is probably best remembered as a vicious anti-Catholic, anti-foreigner zealot, but the point still holds that for 173 of the 181 years that the head-covering ban has existed, there’s likely been a compelling reason to abandon it for Jewish men who wish to wear the kippah. Yet, we’ve seen no movement on the matter until now.
Should the tradition be amended? It’s interesting that the only representative who plans to take advantage of this new rule is Representative-elect Omar; even Watson Coleman says she’s not going to be taking advantage of it.
While we appreciate the fact that the hijab is part of Omar’s religious dress, we also appreciate that head coverings have likely been the part of other representatives’ religious dress, and they also haven’t been able to wear them on the floor, either. This wasn’t just some “blind spot” but part of congressional heritage….