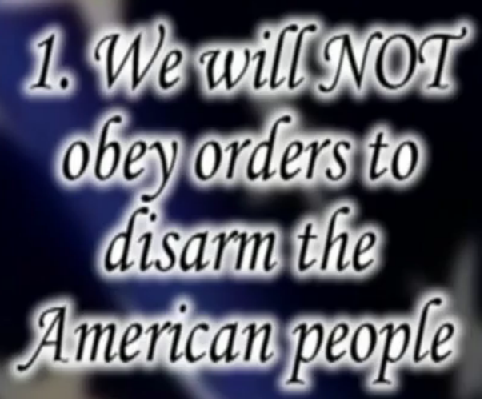 COUNTY SHERIFF TAKES OATH SERIOUSLY, VOWS ZERO ENFORCEMENT OF NEWLY PASSED
GUN CONTROLS
SEE: http://the-trumpet-online.com/county-sheriff-takes-oath-seriously-vows-zero-enforcement-newly-passed-gun-controls/;
On September 25, 2018, Breitbart News reported that I-1639 would put in place enhanced background checks for the purchase of semiautomatic rifles, would place a ten-day wait on completion of a semiautomatic rifle sale, and would require purchasers to pass a gun safety course. The initiative also contained new gun storage laws for every type of firearm, including penalties for gun owners whose guns were stolen and used in crimes, among other things.
Chief Culp reacted to the passage of I-1639 by reminding Republic residents that the Second Amendment will reign supreme under his leadership:

Republic Police WA
I’ve talked with quite a few concerned citizens today so let me clear something up.
I’ve taken 3 public oaths, one in the US Army and Two as a police officer. All of them included upholding and defending the Constitution of the United States of America.
The second amendment says the right to keep and bear arms shall not be infringed.
As long as I am Chief of Police, no Republic Police Officer will infringe on a citizens right to keep and Bear Arms, PERIOD! – Chief Culp
In an interview with KXLY, Culp added, “We took an oath to uphold and defend the constitution of the United States and the constitution of the State of Washington, and [I-1639] completely flies in the face of both the U.S. and state constitution.”
Culp said he believes I-1639 will “eventually … be overturned in the courts.” Until then, he made clear, the controls of the initiative will not be enforced in Republic, Washington.