Protests after Christian woman released from captivity in Pakistan

UNABLE TO REACH ASIA BIBI, MUSLIMS IN PAKISTAN ARE ATTACKING RANDOM CHRISTIANS
BY CHRISTINE DOUGLASS-WILLIAMS
SEE: https://www.jihadwatch.org/2018/11/unable-to-reach-asia-bibi-muslims-in-pakistan-are-attacking-random-christians;
Christians in Pakistan are being taught a lesson, and are being made an example. Rampaging Muslims who are out for Asia Bibi’s life are now escalating their persecution of Christians in Pakistan, since they can’t get to Bibi herself.
Jihad Watch has been meticulously covering the deranged calls for the blood of Bibi after she was acquitted on trumped-up blasphemy charges. Multitudes rioted in the streets of Pakistan, demanding her death. Even the Supreme Court judges who acquitted her were threatened, and then, facing the mad fury over the acquittal, the Pakistani government capitulated to the rioters, banned Asia Bibi from leaving country, and is reviewing her blasphemy acquittal.
This move by the Pakistani government was a reflection of its adherence to Islamic blasphemy laws. Pakistani Prime Minister Imran Khan “vowed to take the matter [of blasphemy] to the United Nations, saying that few in the West understand the pain caused to Muslims by such activities.”
It is beyond pain. It’s Islamic law, rooted in supremacism and entitlement. Muhammad and Islam must not be offended, period. And this rule does not apply only to Muslims, but to anyone. This is the reason why many Islamic groups in the West work overtime to ensure that Westerners are kept in line with Islam’s official closed corpus. The “Islamophobia” subterfuge is now rooted in Western societies. “Islamophobia” is passed off as a form of “racism,” but the “Islamophobia” initiative is really about silencing criticism of Islam. Therefore, rather than risk Muslim ire, or violence and rioting by Muslims, Westerners are shutting their mouths and sticking to criticizing Judaism, Christianity or any other faith if they wish to, but they do not dare criticize Islam. It is superior to every other faith, in the implied view of proponents of “Islamophobia” and “hate speech” laws.
Take, for example, Canada. Pakistani MP Iqra Khalid introduced her anti-Islamophobia motion M-103, which passed in Parliament, and now the Trudeau government, as a followup, is “taking action” and “monitoring citizens for compliance” — as part of a 23 million dollar anti-“discrimination” plan- – under the leadership and direction of groups such as the National Council of Canadian Muslims (formerly CAIR.Can) and the Islamic Charity IRFAN, which was designated a terror-linked group by the previous Conservative government. 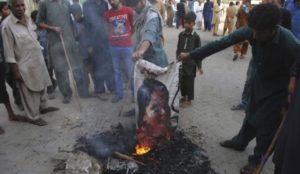 
Islamists reportedly attacked travelers in Pakistan who identified themselves as Christians in the wake of the decision by the Supreme Court to rescind the 2010 death sentence against Asia Bibi for alleged blasphemy, CNN reported on Sunday.
Breitbart News has long reported that Pakistan’s controversial blasphemy law is disproportionally used target religious minorities, particularly Christians.
Human rights groups have determined that Muslims often use the law to settle personal disputes and vendettas.
Peter Jacob, the executive director for the Center for Social Justice in Lahore, told CNN that half of the individuals accused of blasphemy in Pakistan are non-Muslims, adding that his organization registered cases in which anti-Bibi rioters asked travelers to divulge their religion, and if they revealed they were Christian, “They were taken out of their cars and beaten up.”
“The mental and psychological scars” inflicted on the Christian community will endure in the “current climate of fear,” Jacob noted.
CNN recently spoke to members of the Christian minority community in Pakistan impacted by Bibi’s acquittal.
“While speculation is rife about the safety of Bibi and her family, there are larger conversations at stake regarding the protection of Pakistan’s tiny Christian minority,” CNN noted, adding, “The country’s strict blasphemy laws are a topic of great sensitivity in Pakistan; accusations of blasphemy have seen a surge in mob violence and lynchings in pockets of the country.”
Followers of Christ make up less than two percent of Pakistan’s population of 200 million, according to Jacob. Yet they have been in the territory that forms modern Pakistan for centuries, long before it was declared an Islamic country.
“Please don’t name us,” a member of Pakistan’s Christian minority told CNN on condition of anonymity for fear of retribution. “But we are Christians and if Muslims aren’t safe from these conversations then we are nothing to these people, we respect the judgment of the Supreme Court, and that is paramount, I just want this situation to go away and for this tension to be lifted from our shoulders.”
Nearly a week after the October 31 Supreme Court decision to acquit Bibi, Pakistani authorities moved her to an undisclosed location last Thursday, fearing for her safety.
Islamists linked to the anti-blasphemy Tehreek-e-Labaik Pakistan (TLP) party that orchestrated riots across the Muslim country soon after the supreme court’s decision have threatened to kill Bibi, her lawyer, and the judges who cleared her.
Last Friday, the Pakistani government reached a deal with TLP to prevent Bibi from leaving the country while the Supreme Court deals with petitions to review its acquittal of the Christian mother of five…..