POPE FRANCIS, DEFENDER OF ISLAM,
TO VISIT MOROCCO TO
"STRENGTHEN CHRISTIAN-MUSLIM TIES"
BY ROBERT SPENCER
SEE: https://www.jihadwatch.org/2018/11/pope-francis-defender-of-islam-to-visit-morocco-to-strengthen-christian-muslim-ties;
Why is he going? To report to his superiors?
Pope Francis last year met in the Vatican with Dr. Muhammad bin Abdul Karim Al-Issa, the secretary general of the Muslim World League (MWL), a group that has been linked to the financing of jihad terror.
During the meeting, al-Issa thanked the Pope for his “fair positions” on what he called the “false claims that link extremism and violence to Islam.” In other words, he thanked the Pope for dissembling about the motivating ideology of jihad terror, which his group has been accused of financing, and for defaming other religions in an effort to whitewash Islam.
I don’t object to the Pope’s meeting this man. After all, Jesus was a friend of tax collectors and sinners. But the meeting appears to have been a pointless feelgood session, probably featuring some sly dawah from al-Issa. According to Breitbart News, “the two men reportedly exchanged views on a number of ‘issues of common interest’ including peace and global harmony, and discussed cooperation on issues of peaceful coexistence and the spread of love.”
The spread of love. Yes, that’s what the Muslim World League is all about.
Nor is this the first time a Muslim leader has thanked the Pope for being so very useful. Last July, Ahmed al-Tayeb, the Grand Imam of Cairo’s al-Azhar, thanked him for his “defense of Islam against the accusation of violence and terrorism.”
Has any other Pope of Rome in the history of Christianity ever been heralded as a “defender of Islam”? Should he be a defender of Islam? Shouldn’t he instead be defending the Christians who are being persecuted in Muslim countries?
“Leave them; they are blind guides. And if a blind man leads a blind man, both will fall into a pit.” (Matthew 15:14)

“Pope plans Morocco trip in March to strengthen Christian-Muslim ties,” by Ella Ide, Times of Israel, November 13, 2018 (thanks to Paul):


VATICAN CITY, Holy See (AFP) – Pope Francis, who has made building bridges between Christianity and Islam a cornerstone of his papacy, will visit Morocco in March, the Vatican said Tuesday.
Francis, 81, will be the second pope to travel to Morocco, following John Paul II more than three decades ago.
He will take in Rabat and Casablanca on the March 30-31 trip to the Muslim-majority country, the Vatican said.
The pontiff was “accepting the invitation extended by King Mohammed VI and the bishops,” it said.
Francis has already visited several Muslim countries, including Turkey in 2014, Azerbaijan in 2016, and Egypt in 2017.
John Paul II went to Morocco in 1985 on a trip that was also seen as an opportunity to build ties between Muslims and Christians….
Foreign Christians worship freely and are protected by the authorities. But those who convert to Christianity — estimated to be a few thousand people — do so quietly. 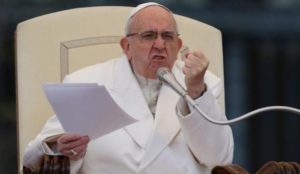 
Pope Francis implored his faithful followers on Wednesday to refrain from gossiping, as he believes it’s a form of “terrorism” and “to gossip is to kill.”
“Gossipers are terrorists because with their tongues they drop a bomb and then leave, and the bomb they drop destroys reputations everywhere,” Francis said during his weekly general audience….
“We all live by communicating, and we are continuously on the edge between truth and lies,” Francis said. He added that gossip “kills because the tongue kills like a knife.”…