SHARIA, JIHAD APOLOGIST, MINNESOTA REP. ILHAN OMAR: "LIKE MEMBERS OF THE JEWISH COMMUNITY, I KNOW HOW IT FEELS TO BE HATED BECAUSE OF MY RELIGIOUS BELIEFS" 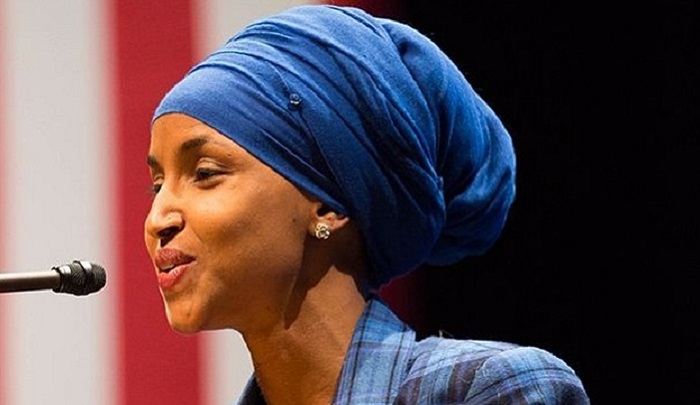 “Ilhan Omar lauds Jewish-Muslim cooperation in fighting bigotry”, Jewish Telegraphic Agency, November 27, 2018:
WASHINGTON (JTA) — Ilhan Omar, a Minnesota Democrat and one of the first two Muslim women elected to Congress, lauded Jewish-Muslim cooperation in combating bigotry.
“Like members of the Jewish community, I know how it feels to be hated because of my religious beliefs,” Omar, who has stirred controversy in the Jewish community for attacks on Israel and suggesting she backed the boycott movement against the Jewish state, wrote Monday in an op-ed for the Minneapolis Star Tribune. “But we know that we are stronger when we stand united against bigotry and hate.”
Omar, until now a state lawmaker, has come under fire for calling Israel an “apartheid regime” and for saying it had “hypnotized the world” to ignore its “evil” treatment of Palestinians.
Her op-ed notes a spike in reports of hate crimes on Muslims and Jews, and last month’s massacre at a synagogue complex in Pittsburgh.
She cited instances where the communities stood up for each other.
Muslim organizations “raised more than $200,000 to support the victims and their families from the Tree of Life Synagogue,” she said. “I remember how, less than two years ago, Jewish Americans stood with their Muslim-American neighbors against the administration’s cruel travel ban. Eighteen rabbis were arrested as they protested the ban outside Trump Tower in New York.”
Omar correlated the spike in hate attacks, reported by the FBI, to Donald Trump’s presidency.
“The culture of intolerance spread by President Donald Trump has clearly emboldened racist individuals to acts of violence,” she said….
_______________________________________________________

In her Minneapolis Star Tribune op-ed on the FBI’s just released 2017 Hate Crimes Report, Minnesota Rep.-elect Ilhan Omar presents herself as a sort of apostle of love.  Omar decries the increase in reported hate crimes.  However, she immediately attributes this increase to President Trump.  As Omar puts it in her first paragraph: "The culture of intolerance spread by President Donald Trump has clearly emboldened racist individuals to acts of violence.”  Something tells me that Omar’s message of love is a thinly disguised invitation to hate — to hate President Trump and his supporters, anyway.
Omar notes the increase in anti-religious hate crimes committed against Jews (up 37 percent) as well as the fact that Jews have been the foremost target of hate crimes since the FBI started keeping these statistics. But Omar doesn’t ask who is committing those crimes.
However, it isn’t long before she steps forward as a victim herself: "Like members of the Jewish community, I know how it feels to be hated because of my religious beliefs. Almost one in five hate crimes committed last year was motivated by religious bias, with 18.1 percent committed against Muslims — well above the historical averages before President Trump's election.”
Omar habitually portrays herself as a victim.  It’s an irritating tic.  But she has not been the victim of any reported hate crime.  A young refugee to the United States from Somalia, Omar was elected to Congress at the age of 36.  This achievement must make her one of
the most fortunate citizens of the United States.  Her claim to victimhood represents the new style of American assimilation.
It might have been generous of Omar to note that the number of reported anti-Islam hate crimes actually decreased from the last year of the Obama administration (307 in 2016) to the first year of the Trump administration (273 in 2017).  Perhaps President Trump deserves credit for spreading the love.
Yet one wonders if her column isn’t an example of what Trump calls fake news.  While the FBI report shows the stated increase in reported hate crimes, it also notes in the first paragraph of its press release: "Although the numbers increased last year, so did the number of law enforcement agencies reporting hate crime data — with approximately 1,000 additional agencies contributing information.”
This raises the obvious question of whether the reported increase derives from the increase in the number of agencies reporting data.  Omar has no genuine interest in that possibility.  She doesn’t even see the issue, let alone raise it.  Her interest is entirely argumentative and political.
Omar quickly finishes with the 2017 report and moves on to the administration’s allegedly cruel “travel ban.”  She invokes the specter of “Islamophobia.”  According to Omar, "Islamophobia and anti-Semitism are two sides of the same bigoted coin.”
Well, I doubt it.  “Islamophobia” is a concept fervently promoted since 2000 by the Organization of the Islamic Conference.  It seeks to stigmatize expressions of disapproval of Islam as irrational manifestations of fear and prejudice.  Implicitly it seeks to make us afraid to talk about perfectly reasonable fears.  Having become the home of some 100,000 Somali immigrants over the past 25 years, Minnesota badly needs to make room for honest discussion of the costs and benefits of continued immigration.
At my synagogue in St. Paul, we first hired off-duty police officers to stand guard during Saturday and Sunday school hours shortly after 9/11.  We didn’t worry much about mass murder before then.
And despite her self-portrait as an apostle of love, Omar is a proponent of the anti-Israel Boycott, Divestment, Sanctions movement. She is, to put it bluntly, an Islamist hater of Israel. In a 2014 tweet during Israel’s hostilities with Hamas, for example, Omar prayed for “Allah to awaken the people and help them see the evil doings of Israel.” In a May 31 tweet this year, she referred to Israel as an “apartheid regime.”
This comparison is a calumny of Israel, which draws no distinctions based on race. Israel has proudly rescued black Jews and offered them refuge. In addition, Israeli Arabs — an ethnic minority in the Jewish state — are afforded equal civil rights. They enjoy the right to vote in elections. They exercise rights of speech and religion. They have access to a robust free press. They serve in the Knesset and in the judiciary. They are the freest Arabs in the Middle East. Though Omar purports to distinguish between the Jewish state and the Jewish people, the true ground of her animus against Israel is necessarily anti-Semitic.

Omar soft-pedaled her support for BDS during her appearance before a large Democratic audience at Beth El Synagogue in St. Louis Park the week before the competitive Democratic primary on Aug. 14, though she has proudly reiterated it since her election.  During the campaign the Star Tribune kept her support of BDS a deep secret to voters who get their news from the paper.  Although she holds herself out today in the Star Tribune an apostle of love, Ilhan Omar is an enthusiastic trader in one side of a bigoted coin.