Sharia, corruption, and Jew-hatred come to the House. My latest in FrontPage: 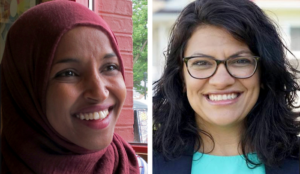 As expected, two Muslim women, Rashida Tlaib in Michigan and Ilhan Omar in Minnesota, have been overwhelmingly elected to Congress. The establishment media will celebrate these victories as triumphs of America’s “diversity”; unfortunately, in reality neither one is worth celebrating.
Tlaib is a vociferous foe of Israel. With the Democrats now regaining control of the House, Tlaib is likely to be an energetic proponent of the new majority’s vendetta against the Middle East’s only democracy. The House is likely to do all it can to roll back President Trump’s pro-Israel polices, with Tlaib as well as Omar as becoming the public faces of the effort.
According to the JTA, when Tlaib was asked if she would vote against military aid to Israel, Tlaib responded: “Absolutely, if it has something to do with inequality and not access to people having justice. For me, U.S. aid should be leverage. I will be using my position in Congress so that no country, not one, should be able to get aid from the U.S. when they still promote that kind of injustice.”
What kind of injustice? Tlaib, of course, had nothing to say about the genocidal incitement against Jews and Israel that regularly features on Palestinian television. She did say, however, that she favors a one-state, not two-state, “solution” to the Israeli-Palestinian conflict: “One state. It has to be one state. Separate but equal does not work. I’m only 42 years old but my teachers were of that generation that marched with Martin Luther King. This whole idea of a two-state solution, it doesn’t work.”
Indeed it doesn’t. A Palestinian state would be a new base for renewed jihad attacks against Israel. But a “one-state solution” would be even worse, unless that state is the current State of Israel, but that is not the one state Tlaib has in mind. She is calling for an Israeli/Palestinian state that would not be a Jewish State or a homeland for the Jewish people, but a federation in which Palestinians would soon overwhelm Jews demographically. Progressive denial of their rights would soon follow: as I show in my book The History of Jihad From Muhammad to ISIS, there has never been a majority Muslim nation in which Jews enjoyed equality of rights with Muslims. Tlaib’s unitary state would be no different.
The hijabed (and therefore pro-Sharia) Ilhan Omar, meanwhile, is even more hateful than Tlaib. According to the Daily Wire, in 2012 Omar tweeted: “Israel has hypnotized the world, may Allah awaken the people and help them see the evil doings of Israel. #Gaza #Palestine #Israel.” Challenged about this tweet much more recently, she doubled down and attacked the man who called attention to the tweet: “Drawing attention to the apartheid Israeli regime is far from hating Jews. You are a hateful sad man, I pray to Allah you get the help you need and find happiness.”
There is much, much worse about Omar. David Steinberg of PJ Media has done extraordinary work in shedding light on aspects of Omar’s record that the establishment media has steadfastly ignored. Steinberg reports that Omar has “faced allegations — soon backed by a remarkable amount of evidence — that she had married her own brother in 2009, and was still legally his wife. They officially divorced in December 2017. The motivation for the marriage remains unclear. However, the totality of the evidence points to possible immigration fraud and student loan fraud.” What’s more, she swore to apparent falsehoods in court.
But Leftists rarely have to answer for their corruption, and in a Democrat House, Omar will much more likely be celebrated than investigated. She and Tlaib will enjoy establishment media accolades as they pursue their hard-Left, anti-American, anti-Israel agenda. Their presence in the House of Representatives may be evidence of “diversity,” but it is also a disquieting sign of the continued dominance of identity politics, and the increasing balkanization of the American body politic. Forthrightly pro-America, pro-Israel candidates would stand little to no chance in either of their districts. And that is indicative of a much larger problem.

republished below in full unedited for informational, educational and research purposes

No American flag was in sight.

Khaled Beydoun✔@KhaledBeydoun
This is History. Watch every second of this.

Democrat Palestinian-American Rashida Tlaib was draped in a Palestinian flag as she celebrated her primary victory with supporters in August. On Tuesday night Tlaib handily won with over 90 percent of the vote the general election for Michigan’s 13th Congressional District seat vacated by John Conyers’ resignation last December.
Video taken of Tlaib’s victory speech for the August 7th primary showed an emotional Tlaib being embraced by her Palestinian mother,Fatima Elabed, who took the flag off her daughter and draped it on her own shoulders. No American flag was seen in video taken of Tlaib’s speech. Tlaib is a member of Democrat Socialists of America.
Tlaib proudly spoke of her relatives up before dawn in the West Bank watching on TV as their granddaughter was elected to Congress. The crowd responded with ululating.
Video of Tlaib’s speech was posted to Twitter by law professor Khaled Beydoun Tuesday night without clarification that it was from August…

The far-Left, they are different from you and me. They don’t have the same responsibility or accountability. And if they’re Muslim, the blank check is even more readily available. 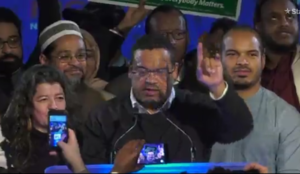 Democratic U.S. Rep. Keith Ellison will be Minnesota’s next attorney general, defeating Republican Doug Wardlow after a bitter campaign marked by allegations of domestic abuse and an intense spotlight on both candidates’ pasts.
Ellison helped deliver the DFL Party a sweep of the statewide elected offices and was met by a raucous room of supporters chanting his name at the party’s election night celebration in St. Paul. Ellison acknowledged the difficulty of the race but said his campaign persevered thanks to his supporters.
“Every single day I will wake up and I will fight to protect the rights of all of us,” Ellison said.
Ellison said “we are all in this together” and that “we are not going to cast anybody away.” “Immigration is a good thing,” he shouted, “having a good-paying union job is a good thing.”
Minnesota voters encountered two candidates who offered starkly different visions for how they would lead the office and two men who spent months painting the other as political radicals.
Ellison, who is also deputy chairman of the Democratic National Committee, has risen to national political prominence since becoming the nation’s first Muslim congressman in 2006. In June, he surprised supporters by announcing that he would give up a safe Democratic House seat to pursue the Attorney General’s Office after Lori Swanson filed to run for governor. Ellison won the DFL Party’s primary just days after ex-girlfriend Karen Monahan alleged that he emotionally and physically abused her.
Ellison, 55, of Minneapolis, has denied Monahan’s claim, and an investigation commissioned by the DFL Party concluded that it could not substantiate the allegations. Republicans dismissed the investigation because the attorney who led the probe works for a law firm that has represented DFL Party interests….
Ellison has a long history of progressive community activism and spent two terms in the Legislature before being elected to Congress. While running for attorney general, he again came under attack for his past association with Louis Farrakhan, the anti-Semitic leader of the Nation of Islam, and for representing the leader of a Minneapolis gang linked to the 1992 slaying of a local officer. Ellison also spoke out in 2000 in support of two women who either killed or attempted to murder police officers.
The DFL Party has stuck behind Ellison since after his primary win, but the investigation it ordered to look into Monahan’s allegation that Ellison tried to drag her off a bed during a 2016 argument failed to produce the clear answers that many sought.
Jerod Greenisen, 27, a St. Paul resident who works for a website design and development agency, said Tuesday that he was uncertain about Ellison for attorney general.
Still, Greenisen added: “I ended up voting for him just because I didn’t think I necessarily had enough information to discredit all the positive things about him…