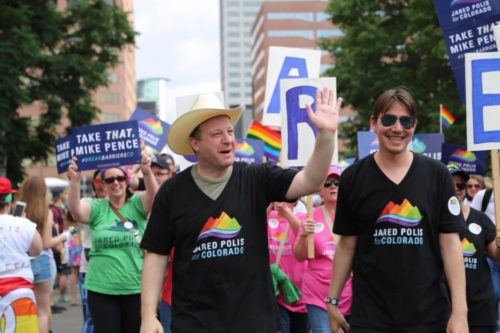 COLORADO VOTERS ELECT NATION'S FIRST
OPENLY HOMOSEXUAL GOVERNOR
BY HEATHER CLARK
SEE: https://christiannews.net/2018/11/07/colorado-voters-elect-nations-first-openly-homosexual-governor/;
DENVER, Co. — Voters in Colorado have elected the nation’s first openly homosexual governor, choosing Democrat Jared Polis 52 percent over Republican challenger Walker Stapleton, who obtained 45 percent of the vote.
Jared Polis, who raises two children with his partner, Marlon Reis, has been serving in the U.S. House of Representatives since 2009. He made clear during his campaign that homosexual rights are an important issue to him and noted his record of either writing or working to pass legislation protecting homosexuals and those who identify as transgender.
“Jared worked across the aisle to eliminate the discriminatory ban on openly gay military service members, and he’s fighting back against Trump’s despicable ban on transgender Americans serving in the military,” Polis’ website states.
“Jared fought for years for marriage-equality legislation, and after the Obergefell victory in 2015, he and his family celebrated on the Supreme Court steps,” it outlines.
The site notes that Polis also helped to launch the “LGBT Equality Caucus” in Congress, and co-founded the “Transgender Equality Task Force.”
It further touts that Polis has been an advocate for recreational marijuana, as he states that “Colorado has proven that allowing responsible adults to legally purchase marijuana gives money to classrooms, not cartels; creates jobs, not addicts; and boosts our economy, not our prison population.” He co-authored the “Regulate Marijuana Like Alcohol Act,” which was sponsored by Sen. Bernie Sanders.
On Tuesday night, with the song “The Times They Are A-Changin'” playing the background, Polis took to the podium to thank supporters.
“Tonight, right here in Colorado, we proved that we’re an inclusive state that values every contribution, regardless of someone’s sexual orientation or gender identity,” he said.
“For the LGBTQ pioneers for equality in the generations before me—who endured so much hardship and hurt to make it possible for so many of us, myself included, to live and to love openly and proudly—and to the people right here in this room, I want to say I am profoundly grateful for all the work we’ve done to overcome,” Polis stated, being met with cheers and applause.
He also thanked his partner from the podium, who he noted is now the first “first man” in Colorado. The crowd again cheered enthusiastically, and Reis smiled and waved in response.
Polis will now be the successor of Democrat John Hickenlooper, who has served as governor since 2011.
Proverbs 29:2 says, “When the righteous are in authority, the people rejoice, but when the wicked beareth rule, the people mourn.”