“The family have had to move from place to place to avoid detection. Sometimes they can only operate after sundown. They have had to cover their faces when they go out in public. They have had to remove the rosary that hangs from their car rear-view mirror for fear of attack.”
Remember: this woman has already been in prison on death row for eight years. She was acquitted by the Pakistani Supreme Court, which found the evidence that she had “blasphemed” insufficient. Yet the Muslim mobs that are hunting for her are avid to spill her blood. Remember also that they have never, ever gotten upset about the jihad murderers who have supposedly hijacked their religion, at least according to innumerable Western non-Muslim politicians. Clearly there are massive numbers of people in Pakistan whose world view is exactly the same as that of the jihadis. 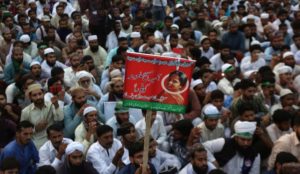 
The family of Asia Bibi, the Christian woman who spent eight years on death row in Pakistan for blasphemy before being acquitted three weeks ago, claim they are being hunted by extremists going house to house with their photographs to try to track them down.
Bibi’s family have been in hiding since her acquittal by the country’s supreme court. She is in protective custody as part of a deal between the government and a hardline Islamic party, under which violent protests were called off while a review of the court ruling was undertaken.
Bibi’s lawyer, relatives and supporters have appealed for the family to be given asylum in a European or north American country. Several countries have indicated their willingness to offer a home, but nothing concrete has emerged.
John Pontifex, of Aid to the Church in Need UK (ACN), which has campaigned on Bibi’s behalf since she was convicted and sentenced to death in 2010, said he had been in almost daily contact with her family over the past three weeks and they were very frightened.
“They have told me that mullahs had been reported in their neighbourhood going from house to house showing photos of family members on their phones, trying to hunt them down,” he told the Guardian.
“The family have had to move from place to place to avoid detection. Sometimes they can only operate after sundown. They have had to cover their faces when they go out in public. They have had to remove the rosary that hangs from their car rear-view mirror for fear of attack.”
Pontifex said the family’s faith was “sustaining them in this time of acute danger”. He added: “They say that if they are not allowed to find a future outside Pakistan, the fear is that sooner or later something terrible might happen to them.”…
On Tuesday, Sayeeda Warsi told the House of Lords: “There have been press reports that Asia Bibi, if granted asylum in the United Kingdom, would potentially not be safe from some communities here … As someone who is deeply connected to British Muslim communities, I assure her that they are fully supportive of any asylum claim that Asia Bibi may have and that our country may afford her, and that she would be supported as she would be by all other communities in this country.”…

Asia Bibi's liberty has been forsaken by the rest of the world & America needs to step up
Liz Wheeler of One America News & Brigitte Gabriel
Posted by John at 11:17 AM