FLORIDA: MUSLIMS, LEFTISTS DEMAND OFFICIAL'S RESIGNATION FOR ASKING
IF DEVELOPED SOCIETIES
BENEFIT FROM MORE MUSLIMS
BY ROBERT SPENCER
SEE: https://www.jihadwatch.org/2018/08/florida-muslims-leftists-demand-officials-resignation-for-asking-if-developed-societies-benefit-from-more-muslims; republished below in full unedited for informational, educational and research purposes:
The question, as always, is lost in the fog of “Islamophobia” accusations and self-righteous posturing by opportunistic Leftist officials.
Joel Greenberg asked: “Very simple question…Name just ONE society in the developed world that has benefited in ANY WAY from the introduction of more Muslims. Just one.”
This question is not allowed to be asked. Rasha Mubarak, president of the Young Democrats of Orange County, says: “This feeds into the anti-Muslim rhetoric that not only is dangerous for the Muslim community, misperceived Muslim Community, people of color, moreover for our entire Centra Florida community. It’s divisive and hazardous….His statement opens the doors for more bigotry and hate – it’s that kind of discrimination that leads to violence. They’re not just words when they’re by elected officials. It gives a green light for people to act upon this hate and ignorance.”
Claiming without any evidence whatsoever that Greenberg’s words constitute “discrimination that leads to violence” is a common tactic today among Islamic supremacists and their Leftist allies. They claim that because what is being said will supposedly incite people to commit acts of violence against them, the speaker must be silenced for the protection of the Muslim community. Carried to its logical conclusion, this line of reasoning would forbid everyone to say anything critical of anyone, for fear that the criticism might lead to violence against the criticized individual or group. But Leftists and Islamic supremacists never carry it that far; they just use this claim to silence those who state things they don’t want stated.
For the question remains: is there a developed country that has a lower crime rate, an increased GDP, or any sign of economic or societal improvement after a Muslim migrant influx? There have been many immigrant waves into the West, and the question has been asked, and answered favorably, after many of them; but this time, to ask it is in itself an insult and a threat to the Muslim community.
What’s more, Joel Greenberg was commenting on a tweet from this site about female genital mutilation (FGM). The tweet contained a link to this story about a three-year-old in Britain who was rushed to emergency surgery after a botched FGM operation. Did that actually happen? Yes. Is FGM wrong? Yes. But “journalist” Monivette Cordeiro of the Orlando Weekly doesn’t bother with any such considerations; she just links (at “a site that critics have called anti-Muslim propaganda”) to the hard-Left smear organization the Southern Poverty Law Center (SPLC), which has been thoroughly discredited. Why is the SPLC trustworthy as an arbiter of what is a hate group and what isn’t? Cordeiro, like every other mainstream media reporter in the galaxy, doesn’t see fit to tell us, or to inform her readers that there is considerable evidence that the SPLC is not a neutral arbiter, but a hard-Left smear group that uses its “extremist” label to tar legitimate groups that oppose its Leftist agenda. Concerned about FGM? Oh, that’s just “anti-Muslim propaganda,” you see. Will the three-year-old girl survive? To care would be “Islamophobic.”
So here we have yet another witch hunt, with yet another public official in hot water for asking a salient and important question, and for opposing what every decent human being should oppose. This is like a play, a very popular play that keeps getting produced all over the country. Everyone always acts out his or her part. Here’s how it goes: a public official makes a statement about Islam or jihad that opposes the mainstream view that Islam is a religion of peace that has nothing to do with the violence constantly done in its name. A chorus of indignation follows from Leftist officials and Muslim spokesmen, demanding the resignation of the “bigot.” Mainstream media reporter writes about the controversy, writing negative and distorted statements about the official, invoking the likes of Hamas-linked CAIR and the SPLC as if they were neutral and reliable sources. The only plot variable is that sometimes, but rarely, the official holds out, and refuses to apologize or resign. Let’s hope Joel Greenberg turns out to be one of the courageous ones. 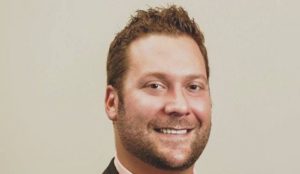 Central Floridians are calling on Seminole County Tax Collector Joel Greenberg to apologize after Greenberg posted an “Islamophobic” question asking how Muslims benefit society on Facebook.
The controversy began Saturday after the Republican elected official posted on his personal Facebook, “Very simple question…Name just ONE society in the developed world that has benefited in ANY WAY from the introduction of more Muslims. Just one. Asking for a friend.”
Greenberg also included in the comments a link to an article about a case of female genital mutilation from Jihad Watch, a site that critics have called anti-Muslim propaganda.
The post set off a firestorm of online backlash from the local Muslim community and other advocates, who asked Greenberg to condemn the statement or to resign if he refuses to apologize.
Rasha Mubarak, president of the Young Democrats of Orange County and a civil rights advocate for the Muslim community in Orlando, called on the public to contact Greenberg’s office to voice their concerns.
“Joel Greenberg posts derogatory and Islamophobic comments,” Mubarak wrote online. “This feeds into the anti-Muslim rhetoric that not only is dangerous for the Muslim community, misperceived Muslim Community, people of color, moreover for our entire Centra Florida community. It’s divisive and hazardous – there is no room for any kind of discrimination in office. Joel Greenberg needs to resign if he fails to release a public apology.”
In an interview with Orlando Weekly, Greenberg says he did not write the post – he was literally “asking for a friend” by sharing the same question from Twitter. The original tweet was from conservative commentator Neil Boortz. Greenberg defended himself, saying he didn’t make derogatory statements, but that other people have attacked him with offensive comments.
“I was legitimately asking on behalf of somebody else,” he says. “Now I’m just sitting back and watching people go crazy. … I don’t have a racist or bigoted bone in my body.”…He says he wasn’t trying to offend anybody by asking a “legitimate question.” Anyone who comes to the Seminole County Tax Collector’s office, regardless of religion, will get the same service, he maintains.
(Note: “Just asking questions” is a well-known form of fallacious argument similar to “what about”-ism.)
“One of my best friends is Muslim, and I have a black brother,” he says. “I’m Jewish, which is probably one of the most hated groups. I don’t go out there to be a demagogue against anyone else. I think it’s fun to have a discussion. … There was not a single thing that was derogatory or slanderous. It’s kind of ironic coming from people who claim to be part of a religion of peace and a political party of tolerance don’t tolerate somebody asking a question.”…
“I’m provoking public discussion,” he says. “It’s much different than me making a statement as a fact or opinion. I’m simply asking a question. I don’t think there’s anything wrong with having a discussion, especially when they’re getting censored on other platform. … We live in a world that’s extremely politically correct. Most people try to walk this fine line and unfortunately cannot have public discussions.” 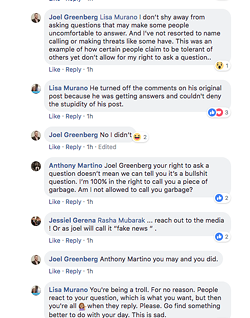 But if Greenberg actually wanted an answer to his question, he could have just consulted Google instead of posting it on Facebook, says Osman Farooq, a Central Florida doctor who is part of the American Muslim Community Center in Longwood.
“The comments are very upsetting, very hurtful,” Farooq says. “This is from a public elected official – we expect a lot better from them. … I think his questions on his public forum from an elected official are consistent with Islamophobic comments and discrimination from his office.”
Farooq invites Greenberg to visit the AMCC in Longwood and see the “amazing things” the Muslim community in Seminole County is doing.
“I’m a critical care physician in Seminole County – I save lives for a living, just to answer Greenberg’s question on Facebook,” he says. “I think he needs to show him humility and voice a public apology that would make people sympathize with his gesture. But to outright deny anything is wrong and play almost dumb is unacceptable.”
Mubarak says advocates are also calling on Greenberg’s family business, Greenberg Dental & Orthodontics, to condemn the statement. In the past, Greenberg has posted other anti-Muslim memes and statements, she says.
“His statement opens the doors for more bigotry and hate – it’s that kind of discrimination that leads to violence,” Mubarak says. “They’re not just words when they’re by elected officials. It gives a green light for people to act upon this hate and ignorance.”
Mubarak adds that although Greenberg’s intent may have been to “have a shock factor,” his posts created more divide within the community.
“He’s being provocative,” she says. “People follow the lead of elected officials. If indeed this was a question, he did not have to publicize it the way he did. He could have reached out to Muslim community leadership and had that conversation.”…
Wesley Neuman, the vice chair of the Seminole County Democratic Party, has called on Seminole County Tax Collector Joel Greenberg to resign from office.
“As a county-wide officer, Greenberg took an oath to uphold the constitutions of the United States of America, and the state of Florida,” Neuman said in a statement. “This sort of rhetoric, in conjunction with his poor management, and inclination to take the law into his own hands indicates that Greenberg is unwilling or unwilling – or both – to faithfully execute his oath of office.”
Neuman also called on Gov. Rick Scott to remove Greenberg from office if he refused to resign.
“Should the governor fail to take action, I promise my top priority after November will be to petition the incoming Democratic governor to remove and replace Joel Greenberg,” he said.
Greenberg has since posted another statement to his personal Facebook, saying “Ah, the religion of peace and the party of tolerance. Until they disagree with you. Hypocrites. All of them. Vote Republican.”