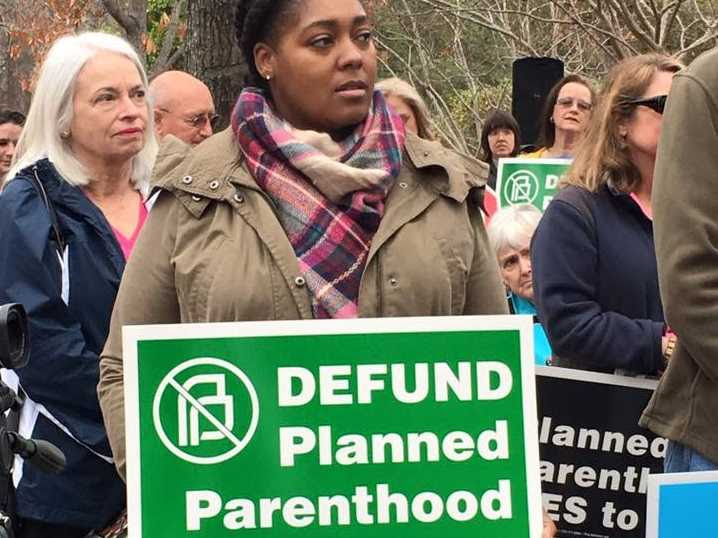 MEDIA BLACKOUT: AMERICANS NATIONWIDE TAKE TO STREETS TO CALL FOR CONGRESSIONAL
DEFUNDING OF PLANNED PARENTHOOD
BY HEATHER CLARK
SEE: http://christiannews.net/2017/02/12/americans-nationwide-take-to-streets-to-call-for-congressional-defunding-of-planned-parenthood/;
Pro-life Americans nationwide took to the streets on Saturday to call on Congress to defund the abortion and contraception giant Planned Parenthood.
Demonstrations took place in a reported 45 states and at over 200 Planned Parenthood locations, from California to Alabama, to New York and Florida, with some gatherings drawing dozens and others drawing hundreds.
In Albuquerque, New Mexico, an estimated 300 residents participated in the event, 200 joined the protest in Fort Wayne, Indiana, and in Peoria, Illinois approximately 70 people took to the streets to speak out against the abortion giant.
The event was organized by three pro-life entities: Citizens for a Pro-Life Society, Created Equal and the Pro-Life Action League.

“As long as they are going stay in the abortion business, that is an organization that shouldn’t be getting one red cent of federal tax money,” Monica Miller, director of Citizens for a Pro-Life Society, told Reuters.
Participants gathered at their local Planned Parenthood and held signs expressing their opposition to taxpayer money being distributed to the controversial organization, such as “Defund Planned Parenthood,” “Stop abortion now” and “Abortion is not health care.”
“Why should tax dollars be given to somewhere where they’re doing killings of babies?” participant Marisol Pfaff of Missouri told NPR.

“They do not have mammograms. They do not provide prenatal care. They do not provide pediatric care, so it is not comprehensive health care for women,” participant Delia Laux of Virginia also told reporters. “Planned Parenthood will say, ‘We’re not using that money for abortion. We’re using it for other services.’ The fact is money is refundable.”
As previously reported, according to Planned Parenthood’s annual report, during the 2014-2015 fiscal year, the organization received $553 million in taxpayer funding/grants in 2014, up from $528 million the year prior, which equated to 43 percent of its total income. $48 million of Planned Parenthood’s income was used for sex education, and $39 million was used for public policy, or to influence legislation, up from $33 million in 2013. Despite its expenditures, it still garnered a $61 million dollar profit.
It aborted 323,999 babies nationwide during that fiscal year, equating to approximately one-third of the more than 900,000 annual abortions in America.
Those who support Planned Parenthood staged counter-protests at more than 100 of the 225 demonstration locations on Saturday, holding signs such as “Women are more than wombs,” “Free abortion on demand” and “I Stand with Planned Parenthood.” Some engaged in chants about “body autonomy” and “women must decide their fate.”
“A fetus is not a baby, abortion is not murder, women are not incubators!” California counter-protester Maya Malika proclaimed, according to the San Francisco gate.
“If you ever, ever, ever really cared about people, you would not want to have someone be murdered,” pro-lifer Arline Miyazaki called out to the those who came to defend the organization. “I’ll pray for you.”
As previously reported, Sens. Joni Ernst, R-Iowa, and James Lankford, R-Okla., recently introduced the “Protect Funding for Women’s Health Care Act,” which would redirect the more than $500 million in federal funding from Planned Parenthood to women’s health care providers that do not perform abortions.
The Act notes that community health centers, local health departments, physicians’ offices and others provide a variety of women’s services and pregnancy care—minus the killing. Reports state that there are over 13,500 community health centers alone that assist with women’s health.