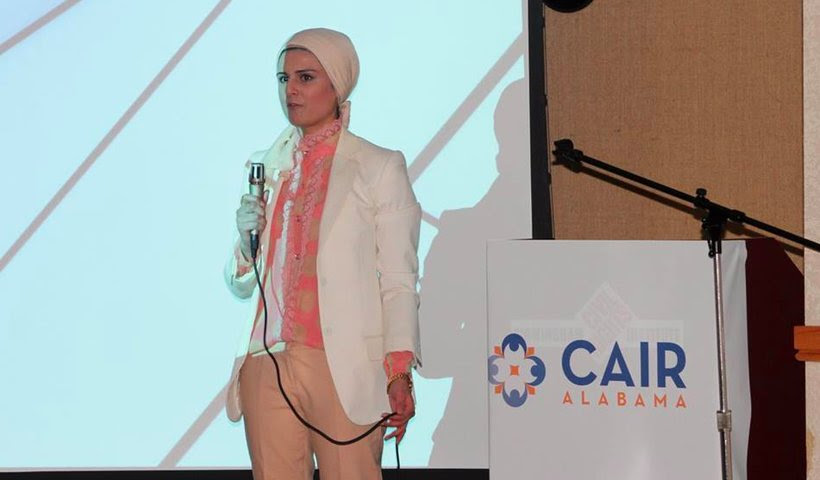 ALABAMA: HAMAS LINKED "CAIR" REP SAYS:
"IT'S JUST HARD BEING A MUSLIM RIGHT NOW"
BY ROBERT SPENCER
SEE: https://www.jihadwatch.org/2017/02/alabama-hamas-linked-cair-rep-says-its-just-hard-being-a-muslim-right-now;
“We’ve seen a huge spike in anti-Muslim attacks in the last year,” claims Khaula Hadeed.
In reality, FBI hate crimes statistics show that anti-Semitic hate crimes are two times more common than anti-Muslim hate crimes. And then there all the anti-Muslim hate crimes that turn out to have been faked by Muslims themselves.
Hadeed works for the Hamas-linked Council on American-Islamic Relations (CAIR). CAIR is an unindicted co-conspirator in a Hamas terror funding case — so named by the Justice Department. CAIR officials have repeatedly refused to denounce Hamas and Hizballah as terrorist groups. Several former CAIR officials have been convicted of various crimes related to jihad terror. CAIR’s cofounder and longtime Board chairman (Omar Ahmad), as well as its chief spokesman (Ibrahim Hooper), have made Islamic supremacist statements about how Islamic law should be imposed in the U.S. (Ahmad denies this, but the original reporter stands by her story.) A California chapter distributed a poster telling Muslims not to talk to the FBI, and a Florida chapter distributed pamphlets with the same message. CAIR has opposed virtually every anti-terror measure that has been proposed or implemented and has been declared a terror organization by the United Arab Emirates. A CAIR operative recently called for the overthrow of the U.S. government.
“It’s just hard being a Muslim right now,” Hadeed laments. Is that so? In reality, it’s hard being an Infidel in Fort Hood, and Boston, and Chattanooga, and Garland, and San Bernardino, and Orlando, and Paris, and Brussels, and Nice, and Berlin, and Jerusalem. Muslims are killing non-Muslims in jihad attacks around the world, not the other way around. Yet the wily Hadeed plays Greg Garrison of AL.com like a fiddle, in claiming for herself coveted victim status. It’s a cynical, deceptive enterprise.


Khaula Hadeed came to the United States from Pakistan in 2002 to join her husband, who was training in internal medicine in New York.
They moved to the South in 2004 so he could serve the indigent population in rural Alabama.
Dr. Talha Malik and another Muslim doctor were among three physicians working in the emergency room at Bullock County Hospital. Malik worked in Union Springs for four years before becoming a researcher at UAB, where he is now a gastroenterologist.
While her husband treated needy patients, Hadeed graduated from Auburn University with a bachelor’s degree in political science in 2008 and a master’s degree in international relations in 2009. She graduated from Cumberland Law School at Samford University in Birmingham in 2014 and had the couple’s first child, a daughter, in 2015.
Hadeed, 32, now serves as executive director of the Alabama chapter of CAIR, the Council on American-Islamic Relations, which incorporated in 2015. She has been helping Alabama Muslims straighten out problems with travel and visas. And there are a lot of problems these days.
“It’s just hard being a Muslim right now,” Hadeed said.
The CAIR group was formed as a response to anti-Sharia laws proposed in the Alabama Legislature. Amendment One, an amendment to the state constitution that prohibits foreign law being used to decide cases in Alabama courts, passed easily in 2014 and was added to the Alabama Constitution. “That’s the climate, a climate of fear,” Hadeed said. “People are giving away their own rights out of fear.”
Her legal training has now been put to use in trying to help Muslims and their families who are having problems traveling to the United States.
In December, that happened to her mother-in-law, a Pakistani who lives in Bahrain and had been to visit the Maliks in Alabama several times. This time, her travel visa was denied. “They felt the attitude change at the U.S. Embassy (in Bahrain, after the Nov. 8 election of President Donald Trump). After pleas to government officials and a reapplication, she was allowed to visit again.
Now Hadeed worries that her own mother, who has visited three times in two years to see her grandchild, could have trouble visiting the next time she tries to travel to America from Pakistan.
“In the name of national security we think there needs to be more checks,” Hadeed said. “There are already extreme checks.”
Hadeed and her husband applied for citizenship in 2015. She was granted citizenship last year. Her daughter was born as a citizen. Her husband is still waiting to hear back on his application. She’s not sure why. “We’re here because of him,” Hadeed said.
“It was a grueling process to become a citizen,” she said.
Hadeed is assisting a UAB doctoral student from Syria who recently brought his wife and daughter to the United States. He’s afraid to leave the country because he might not be allowed back in. “This is the one secure place he found himself,” she said.
The situation is bleak for other Syrians escaping civil war who want to move to the United States. Birmingham has significant communities of Syrians, Yemenis and Iranians who are all from countries included on a seven-nation travel ban issued by Trump in an executive order that has now been delayed by court challenges. Even with implementation of the order delayed, citizens from those countries fear traveling to visit sick or dying relatives, worried they may not be allowed to return.
“I am the reluctant activist,” Hadeed said. “We’re talking about things that affect people every day.”
The election of Trump and his efforts to curb the number of Muslims traveling to the United States has thrown the Muslim community into turmoil and uncertainty.
She has seen it before. She and Dr. Malik were married in December 2001, three months after the terrorist attacks on New York and Washington, D.C., that left the nation in a panic. The backlash against Muslims was harsh then, and it’s harsh now. “We’ve seen a huge spike in anti-Muslim attacks in the last year,” she said….