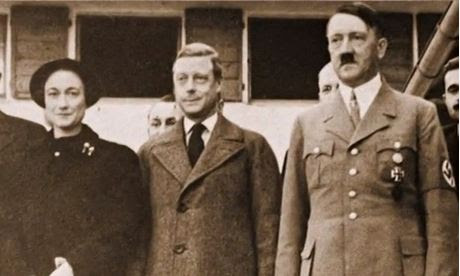 PRINCE CHARLES URGES BRITS AT CHRISTMAS TO REMEMBER "WHEN THE PROPHET MUHAMMAD MIGRATED FROM MECCA TO MEDINA"
BY ROBERT SPENCER
SEE: https://www.jihadwatch.org/2016/12/prince-charles-urges-brits-at-christmas-to-remember-when-the-prophet-muhammad-migrated-from-mecca-to-medina;
According to Islamic tradition, when Muhammad migrated from Mecca to Medina, he wasn’t just “seeking the freedom for himself and his followers to worship.” He became at that point for the first time a political and military leader as well as a religious one. He began for the first time to get Qur’anic “revelations” exhorting Muslims to wage war against unbelievers.
Just as Charles is ignoring the historical context and circumstances of Muhammad’s hijrah, so now he is also ignoring the manifest fact that all too many Muslim migrants are not “seeking the freedom…to worship,” but are coming to Europe to conquer and Islamize the land, emigrating, after Muhammad’s pattern, “for the sake of Allah” (cf. Qur’an 4:100).
Charles also says: “We are now seeing the rise of many populist groups across the world that are increasingly aggressive towards those who adhere to a minority faith.” This is the familiar “Muslims are the new Jews” theme. This is a common Leftist talking point. Many, many others have made this claim before Chomsky, including Noam Chomsky; Bernie Sanders; the notorious non-Muslim Islamic apologist Karen Armstrong; Jeffrey Goldberg, the journalist at The Atlantic who some time ago interviewed Barack Obama about why he won’t call Islamic terrorism Islamic; liberal media pundit Reza Aslan; Muslim Brotherhood-linked Congressman Keith Ellison; Nicholas Kristof, one of the New York Times’ Mideast pontificators; Canadian Muslim leader Syed Sohawardy; and Philadelphia chapter leader of the Council on American-Islamic Relations Jacob Bender. Many others have repeated it.
The blazingly brilliant Daniel Greenfield takes it apart in this video.
The idea that Muslims are the new Jews is put forward by the Left, but it also has opponents on the Left. In 2014, as part of his ongoing awakening to the nature and reality of the jihad threat, Bill Maher noted:


Jews weren’t oppressing anybody. There weren’t 5,000 militant Jewish groups. They didn’t do a study of treatment of women around the world and find that Jews were at the bottom of it. There weren’t 10 Jewish countries in the world that were putting gay people to death just for being gay.

Indeed. Further, no one is calling for or justifying genocide of Muslims. No individual or group opposed to Islam is remotely comparable to the National Socialists. Not that facts have ever gotten in the way of a good meme.
Maher isn’t alone on the Left in having pointed out the absurdity of likening opposition to jihad to the lead-up to the Holocaust. The late Christopher Hitchens also refuted this idea when writing a few years ago about the notorious Ground Zero Mosque proposal:


“Some of what people are saying in this mosque controversy is very similar to what German media was saying about Jews in the 1920s and 1930s,” Imam Abdullah Antepli, Muslim chaplain at Duke University, told the New York Times. Yes, we all recall the Jewish suicide bombers of that period, as we recall the Jewish yells for holy war, the Jewish demands for the veiling of women and the stoning of homosexuals, and the Jewish burning of newspapers that published cartoons they did not like.


Britain’s Prince of Wales has spoken out on national radio in an appeal for persecuted Christians and minorities across the world, but the Royal also moved to criticize “populist groups”.
Speaking on Thought for the Day, a short early morning slot on BBC Radio 4 dedicated to faith issues, the son of Britain’s reigning Monarch urged listeners to think of persecuted religious figures — singling out Jesus Christ and Muhammad — this Christmas. He said:


Normally at Christmas we think of the Birth of our Lord Jesus Christ. I wonder though if this year we might remember how the story of the nativity unfolds, with the fleeing of the holy family to escape violent persecution. And we might also remember that when the prophet Muhammad migrated from Mecca to Medina he was seeking the freedom for himself and his followers to worship.
Whichever religious path we follow, the destination is the same – to value and respect the other person, accepting their right to live out their peaceful response to the love of God.

The future King spent much of his short radio appearance discussing the persecution of Christians without going so far as to name the main source of this persecution — radical Islam. Referring to “insidious forms of extremism… which aim to eliminate all types of religious diversity”, the Prince also mentioned the Yazidis who are coming under extreme persecution from Islamic State, Jews who have been leaving Europe in record numbers to escape Islamist persecution, and the Muslim Ahmadis who are treated as apostates by many mainstream Muslims.
Speaking of his recent interactions with persecuted Christians, Prince Charles said:


In London recently I met a Jesuit protest from Syria…. He told me of mass kidnappings in parts of Syria and Iraq and how he feared that Christians would be driven en masse from the lands described in the Bible. He thought it quite possible there would be no Christians in Iraq in five years.

While he was speaking to promote the receiving of asylum seekers into Europe, the Prince also criticized what he called “populist” movements. Britain’s Guardian newspaper claimed of the comments: “His address will be seen by some as a veiled reference to the election of Donald Trump in the US, the rise of the far right in Europe, and increasingly hostile attitudes to refugees in the UK”.
The Prince said, implying a relationship between Europe’s growing pro-borders movement with European Fascism of the last century:


We are now seeing the rise of many populist groups across the world that are increasingly aggressive towards those who adhere to a minority faith. All of this has deeply disturbing echoes of the dark days of the 1930s.
I was born in 1948, just after the end of World War Two, in which my parents’ generation had fought and died in a battle against intolerance, monstrous extremism and an inhuman attempt to exterminate the Jewish population of Europe.
That nearly 70 years later we should still be seeing such evil persecution is, to me, beyond all belief. We owe it to those who suffered and died so horribly not to repeat the horrors of the past….