State of Virginia Flag, Sic semper tyrannis is a Latin phrase meaning “thus always to tyrants”. It suggests that bad outcomes will or should befall tyrants. 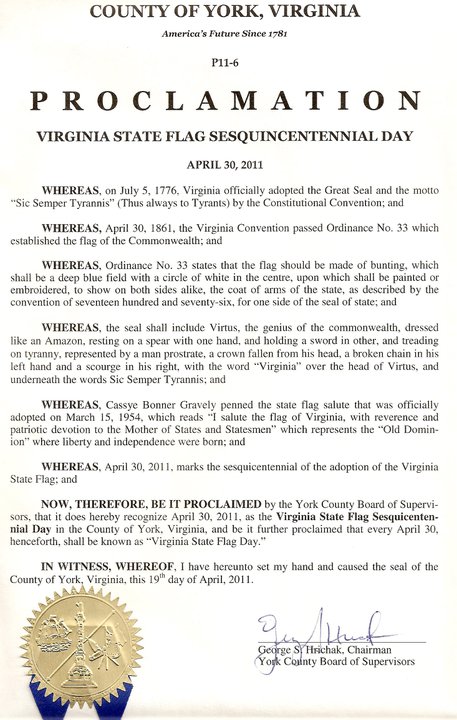 
Virginia, USA – -(AmmoLand.com)- Most gun owners know Mao's quote, but few remember the entire statement. Mao wrote, “Every Communist must grasp the truth; Political power grows out of the barrel of a gun.” You can bet that US democrats fully understand this truth and so, hysterically, fear weapons possessed by the voting civilians who have educated themselves about the failures of leftwing societies.
Our Founding Fathers knowingly stole that possibility of a violent coup from any group who might have hopes of trying. We may willingly give away our sovereignty, but it cannot be taken from us.

But the forces of the Left, and of big government, keep trying to disarm the peaceful civilians.

Recently, in Virginia, Democrats gained political power of the Executive and Legislative (House of Delegates and Senate) Branches and quickly prefiled new restrictive firearms laws. We know that the new laws will affect the law-abiding gun owners and not the criminal element in society. They include so-called “assault rifle” bans, Universal Background Checks, and Red Flag Laws.

It would appear that Democrats have an uncanny ability to choose the most harmful path for our society to take, and then, lie about how great life will be when we all obey their demands – NO DISSENT ALLOWED.

You know they're lying when they rant about a safer society. Virginia AG Mark Herring promised, “The law is the law … What we're talking about here are laws that will make our communities and our streets safer.”
Virginia's Governor, Ralph Northam is selling the proposed laws as a path to a better society. He says, “Things like universal background checks… getting rid of bumpstocks, high volume magazines, red-flag laws…are common-sense pieces of legislation… and because of that Virginia will be safer.”

We all know that restrictive gun laws do not work as promised because of the thriving black market. We all know that peaceful societies do not result from restrictive laws.
Gun banners know they are intentionally lying, but at least this Democrat lie is fully outdated. Gunowners no longer react to it the way Northam thinks they will. We are finished with such lies.

Democrats then made a great error. Feeling drunk with power, they gleefully leaked their intent to use government power to implement those laws. Virginia Rep. Don McEachin said, “…the governor may have to nationalize the National Guard to enforce the law.”

Virginians quickly responded. As of this writing, almost all of Virginia's 95 counties have declared themselves to be Second Amendment Sanctuaries, where the new laws would not be enforced.

As per Philip Van Cleave, President of Virginia Citizens Defense League (VCDL), even some blue counties, like Accomack County, where Gov. Northam was raised, have declared themselves a Second Amendment Sanctuaries.

Although Democrats have used the word ‘sanctuary‘ recently to indicate that they would not abide by laws with which they disagreed with, the Democrat Attorney General Mark Herring refused to accept the legality of these new events. He declared, “localities and local constitutional officers cannot nullify state laws and must comply.” Now, isn’t that just like the current breed of Democrats?
He is hypocritically wrong! The passion of Virginians can nullify those laws with their ballots, their juries, and with massive civil resistance and disobedience. If Dems think they can essentially eliminate police protections required by society, which is not a Constitutional Right, gun owners can nullify laws designed to prevent legal gun possession and self-defense, which is a Constitutional Right.

However, if Virginians fail, and Dems successfully impose these restrictive laws and regulations on firearms owning Virginians, the way Gov. Cuomo did in New York State, the Democrats will be emboldened to continue the trend of passing even more restrictions, also the way Cuomo did.

Cuomo recently signed into law four more “gun safety bills.” touted as “significant progress…advocated for over many years” by the gun banner New Yorkers Against Gun Violence.
In New York Gov. Andrew Cuomo signed the Secure Ammunition and Firearms Enforcement Act, a.k.a the SAFE Act, which became law in January 2013. It was a law banning new so-called ‘assault weapons', requiring registration of grandfathered weapons, universal background checks, unless between family members, and many other restrictions. Its purpose was to create a database of NY State long gun owners.
In New York, 52 of 62 counties passed angry resolutions, and many upstate law departments intend to not enforce the SAFE Act provisions. A very large majority failed to register their grandfathered weapons. Only 23,847 people registered 44,485 guns. It is estimated that up to one million guns, or more, are still not registered.

But those NYS gun owners are no longer law-abiding citizens. If discovered, say during divorce procedures, because an Order of Protection was issued, they face the possibility of years in jail.

We still do not know how well Virginians will fair, in staving off this Constitutional attack. A march is planned, and hopefully, a groundswell of well-led and organized opposition will spring up.

The forward-thinking Philip Van Cleave (VCDL President), told us in a recent interview, that they “hope, at the end of all of this, to roll back some of the useless gun laws all across this country, including New York.”

It will be about the character and resolve of the gun owners who are the Commonwealth of Virginia. Are they up to the task? Mr. Van Cleave thinks so.
We should all be rooting for and supporting them.
How they act will affect the rest of us.
If the Virginians fail to repeal these new laws, gun ownership will still mostly be legal, but the slippery slope will become more slippery. No one yet knows what the final restrictions will be. Self-defense will still be legal, but many common self-defense firearms will not. Although other firearms could substitute at this time, the democrats would feel very comfortable banning many more guns that frightened them.
The Democrats could, and would, expand the list of banned weapons, increase penalties, increase reasons to invoke Red Flag Laws, and slowly pinch away the strength of the Second Amendment.
In effect, gun banners would then, slowly, criminalize guns and gun owners, until, like what they did in the United Kingdom, the right to own firearms and use them for self-defense, would no longer exist.
The Second Amendment has enemies and is only as strong as its defenders.
Right now, Virginia is the bellwether state, to be the indicator of the Second Amendment’s future, and the leader of our culture, to stop THE ADVANCING SICKNESS of the Left. Sic semper tyrannis, let us see if they hold true to their flag?
About the Authors:
Alan J Chwick has been involved with firearms much of his life and is the Retired Managing Coach of the Freeport NY Junior Marksmanship Club. He has escaped New York State to South Carolina and is currently an SC FFL & Gunsmith  (Everything22andMore.com). AJChwick@iNCNF.org | TWITTER: @iNCNF
Joanne D Eisen, DDS (Ret.) practiced dentistry on Long Island, NY. She has collaborated and written on firearm politics for the past 30+ years. She has also escaped New York State but to Virginia. JoanneDEisen@cs.com