GERMANY: MUSLIM MIGRANT TEEN
LEADS GANG OF SEVEN THAT BRUTALLY
BEATS FIREMAN TO DEATH
OUTSIDE CHRISTMAS MARKET
BY CHRISTINE DOUGLASS-WILLIAMS
SEE: https://www.jihadwatch.org/2019/12/germany-muslim-migrant-teen-leads-gang-of-seven-that-brutally-beats-fireman-to-death-outside-christmas-market; republished below in full unedited for informational, educational and research purposes:
A gang of seven was arrested in the German city of Augsburg outside the Christmas market, for the brutal beating death of an off-duty firefighter. He was beaten so violently that he died in the ambulance on the way to the hospital. The main perpetrator was a teen who has Turkish and Lebanese citizenship.
The character of Western countries has been changing since open immigration policies led to a massive influx of Muslim migrants from countries where the rule of law is lacking. Germany, Sweden, the UK, and France, among others, have been plagued by Muslim gang violence which will only grow as long as appeasement and irresponsible immigration policies continue.
A followup article from the German publication Bild about a candlelight vigil was entitled: “He came as a savior and went as an angel.” Many innocent people have lost their lives to a strain of violence which is endemic in many Muslim countries, but has now come to the West. “Interior Minister Joachim Herrmann said: ‘The terrible attack has shaken many people in Augsburg and beyond.'” 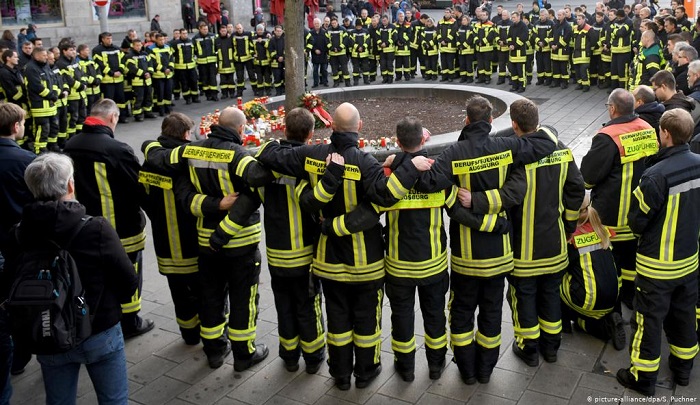 Augsburg – Arrests after the deadly bat attack in Augsburg!
The criminal police have caught the alleged chief offender (17) of the Friday night attack. Meanwhile, officers also arrested the six suspected accomplices. One of them has asked for BILD-Informationen to be with his lawyer at the police station.
According to BILD-Informationen, the main perpetrator is a 17-year-old of German of Turkish and Lebanese nationality. Another one of those who were arrested (17) is Italian.
According to the investigation, a firefighter (49) was attacked and killed by seven young men during an argument with the group in the middle of the city. Together with his wife and a friendly couple, the victim was traveling on the Königsplatz when they came across the group.