"THE WOMEN WERE THE WORST": YEZIDI WOMEN PLEAD WITH DUTCH GOVERNMENT NOT TO ALLOW ISLAMIC STATE WOMEN TO RETURN

"THE WOMEN WERE THE WORST":
YEZIDI WOMEN PLEAD WITH DUTCH GOVERNMENT NOT TO ALLOW ISLAMIC STATE WOMEN TO RETURN
BY ROBERT SPENCER
SEE: https://www.jihadwatch.org/2019/11/the-women-were-the-worst-yezidi-women-plead-with-dutch-government-not-to-allow-islamic-state-women-to-return; republished below in full unedited for informational, educational and research purposes:
“Thousands of Yezidi women are still trapped in refugee camps in northern Iraq. The Dutch government should help these people, not the IS supporters.”
Indeed. But that would be “Islamophobic,” and that’s the very worst thing one can be in Europe and America today. 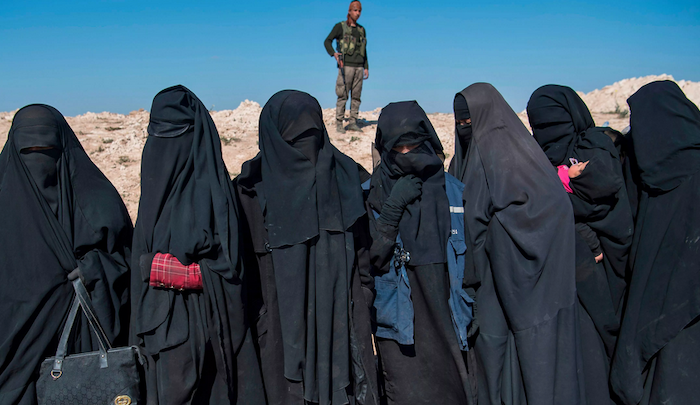 Victims of the Islamic State in the Yezidi community are concerned about the possible return of IS women to the Netherlands. On Wednesday two women, who had traveled from the Netherlands to the IS area, reported to the Dutch embassy in Ankara with their children. According to the Ministry of Foreign Affairs, they want to return to the Netherlands.
A group of Dutch IS women and their children also want to force the Dutch State to collect them from the Kurdish prison camps in northern Syria. The summary proceedings are today.
“The women were the worst”
This leads to great fright and incomprehension among victims of IS in the Yezidi community. “The IS women were worse than the fighters,” says 21-year-old Parween Alhinto. “They beat the imprisoned women and helped the fighters rape them.”
Parween was detained for four months by IS in northern Iraq. She was in the hands of IS men, who raped her regularly. Her ten-year-old sister was sold into slavery and brought to Syria. “There they lived in a house with IS women. My sister told me afterwards that the women of the fighters were the worst.” Parween hopes that the IS supporters in Iraq will be tried and never released again.
Not only Parween, but the entire Yezidi community in the Netherlands is surprised at the discussion about bringing IS women and their children back to the Netherlands. “Thousands of Yezidi women are still trapped in refugee camps in northern Iraq,” says Dalal Ghanim (23). “The Dutch government should help these people, not the IS supporters.” Wahhab Hassoo (24): “There is no appropriate punishment for these people.” Dalal and Wahhab were already in the Netherlands when IS invaded in 2014, but have lost many family members….