SAUDI ARABIA: MAN ASKS MOTHER IF SHE IS "SHIA"; THEN CAB DRIVER BEHEADS HER 6 YEAR OLD SON
BY ROBERT SPENCER
SEE: https://www.jihadwatch.org/2019/02/saudi-arabia-man-asks-mother-if-she-is-shia-then-cab-driver-beheads-her-6-year-old-son; republished below in full unedited for informational, educational and research purposes:
“When you meet the unbelievers, strike the necks” (Qur’an 47:4)
Sunnis consider Shi’ites to be unbelievers, and have attacked them frequently throughout Islam’s 1400-year history. But there is no reason to be concerned about this: Saudi authorities are claiming that the cab driver is “mentally ill.” They likely picked up that idea from Western authorities, who have been routinely claiming that jihadis are mentally ill for years now. 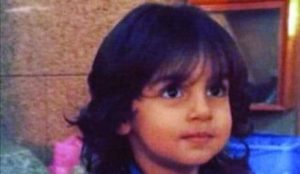 “Taxi driver hauls boy, six, from cab then ‘beheads’ him with shard of glass as his screaming mother fought to save him in Saudi Arabia,” by Dianne Apen-Sadler, Mailonline, February 9, 2019 (thanks to Mick):

A six-year-old boy was reportedly beheaded with a shard of glass as his mother desperately tried to save him in Saudi Arabia.
Zakaria Al-Jaber was in a taxi with his mother on their way to the shrine of Prophet Muhammad in Medina when the driver stopped the car and forced the boy out.
He dragged him to an area near a coffee shop in the Al-Tilal neighborhood, before smashing a glass bottle, reports TMV.
The taxi driver slit his throat with a shard of glass before stabbing him repeatedly as both his mother and a nearby police officer attempted to stop the brutal attack.
It is not known why the driver attacked the boy, but Saudi officials have reportedly claimed he was suffering from mental health issues.
Shia Rights Watch have claimed the boy was killed on Thursday in an act of sectarian violence.
The group said that an unknown man had asked the mother if she was Shia moments before the attack happened….
Shia Rights Watch, whose headquarters are in Washington D.C., said the beheading must be addressed ASAP….