AUSTRIA: NON-MUSLIM GIRLS FORCED TO WEAR HIJABS TO AVOID HARASSMENT FROM MUSLIM MIGRANTS
BY ROBERT SPENCER
SEE: https://www.jihadwatch.org/2019/02/austria-non-muslim-girls-forced-to-wear-hijabs-to-avoid-harassment-from-muslim-migrants; republished below in full unedited for informational, educational and research purposes:
A glimpse into the future of the whole of Europe. When I spoke in Germany in 2010, a teenage girl told me that she was harassed every day on her way to school by Muslim migrants, because she was not, in their view, properly covered. 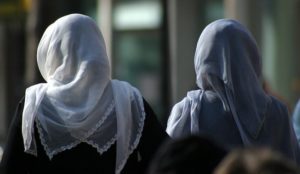 According to Doctor Marcus Franz, who used to serve as a lawmaker in the National Council, there are “problem zones” in the country’s capital where local girls are being forced to hide that they are Austrian.
Former member of the Austrian National Council, Doctor Marcus Franz, stated in an interview to broadcaster oe24.TV that he knew fathers in Vienna’s “problem areas” who give their daughters hijabs in order not to let them be recognised as Austrians and protect them from harassment. He cited witnesses from his personal acquaintances in the 15th district of the Austrian capital.
The man pointed to “permanent micro-aggression”. He said girls are dressing differently than people in Austria are used to because of an “unhealthy aggressive attitude”.
“Girls, young women as well as older women are simply afraid. You can observe this among people, you can see it plain and simple when you work in a social profession — as I do. And one should make a clear distinction between those who are new and those who have already been with us for a long time”, he stated….

Why Are Muslims Raping Non-Muslim Women in Europe?

BY ROBERT SPENCER
SEE: https://www.jihadwatch.org/2019/02/aynaz-anni-cyrus-video-why-are-muslims-raping-non-muslim-women-in-europe; republished below in full unedited for informational, educational and research purposes:
Ex-Muslim Aynaz Anni Cyrus explains a phenomenon that the political and media elites prefer to obfuscate and ignore.