UN MIGRATION PACT TAKES AIM AT "HATE SPEECH"; SLOVAKIA BECOMES THE TENTH COUNTRY
TO REJECT IT
BY CHRISTINE DOUGLASS-WILLIAMS
SEE: https://www.jihadwatch.org/2018/11/un-migration-pact-takes-aim-at-hate-speech-slovakia-becomes-the-tenth-country-to-reject-it;
republished below in full unedited for informational, educational and research purposes:
As part of the UN Migration Pact,  signatories are required to “commit to eliminate all forms of discrimination” with measures including state promotion of “diversity”, prevention of “hate speech” and opening up of welfare systems to illegal immigrants, was written in such a way that it would create a legal framework.”
Sensible nations are rejecting the disastrous UN Migration Pact — the full name of which is the Global Compact for Safe, Orderly and Regular Migration — a UN scheme to make the hijrah seem to be controlled and orderly, all the while stripping away the border controls of sovereign countries and putting them in the hands of the United Nations, which will also influence “diversity” measures and work to curtail free speech within Western nations under the pact.
Slovakia is now “the latest nation to follow U.S. President Donald Trump’s lead in withdrawing from the United Nations.” The Prime Minister of Slovakia, Peter Pellegrini, has called the Pact harmful and a dangerous security risk, warning that the document describes mass migration as “inevitable, necessary, and desirable” while failing to distinguish between legal and illegal migration.
Although there are arguments that the migration pact would not be legally binding, it is politically binding. It is presented in much the same deceptive manner that the Liberal Government of Canada presented the anti-blasphemy Motion M103, which was passed in Parliament. Its proponents argued that a motion is not a law, but motions provide the framework for possible future laws, as well as influence the interpretation of existing laws. Of course, M-103 further armed the already weaponized Canadian human rights commissions and tribunals, enabling them to terrorize and ruin the lives of citizens, as was recently shown in a Jihad Watch article: “Landlord loses appeal to overturn order to pay Muslims $12,000 for wearing shoes in their prayer room.” M-103 also resulted in followup action to systematically “monitor citizens for compliance” in a 23-million-dollar program — money stolen from Canadian taxpayers — that will supposedly help fight discrimination, including “Islamophobia.”
So while many continue to insist that the UN Pact on Migration is not legally binding, it is deemed to be politically binding, and sets up a “legal framework” that can be used to interpret the law. It is no irony that Canada plans to “lead the charge” on the UN Migration Pact.
The world is being divided into two camps: globalists and populists. Despite the name-calling by globalists against so-called “populists” — names including “racist,” “far right,” “xenophobic,” and “Islamophobic” — reasonable people of all races and creeds are starting to wake up to the Leftist-Islamic supremacist alliance, and to globalist leaders’ aim to fling open the doors of Western nations to the hijrah, with no concern for the safety of Western citizens or for their economic futures, even as many of them are nearing pension age. The plan is socialism, which will heap the burden of rising taxation upon the backs of the hardest-working taxpayers. The riots that are now exploding in France over fuel prices are just the tip of the iceberg as more and more people begin to feel the economic pinch. Where do citizens who support globalism think the money is going to come from to support a multitude of migrants from mostly anti-Western countries, all too many of whom have no interest in working? Globalist Sweden is already preparing to raise its retirement age to accommodate “migrant-driven population growth.”.
It has just been revealed that globalist Angela Merkel’s government “deceived the public… as internal documents from the Federal Foreign Office reveal that Angela Merkel’s government has been the main architect of the controversial UN migrant pact.” The co-leader of Germany’s “populist” AfD party, Alexander Gauland, has vowed: “We will do everything we can to avert this disaster in the making.” Merkel is stepping down soon, as her party is deeply divided over Germany’s handling of migration. It has also come to light in France that the “globalist poster boy” Emmanuel Macron‘s polls have just plunged to “historic lows,” while populist Marine Le Pen has climbed in the polls above Macron.
So far, the US, Slovakia Hungary, Poland, the Czech Republic, Austria, Bulgaria, Switzerland, Australia and Israel have all rejected the UN Pact on migration. 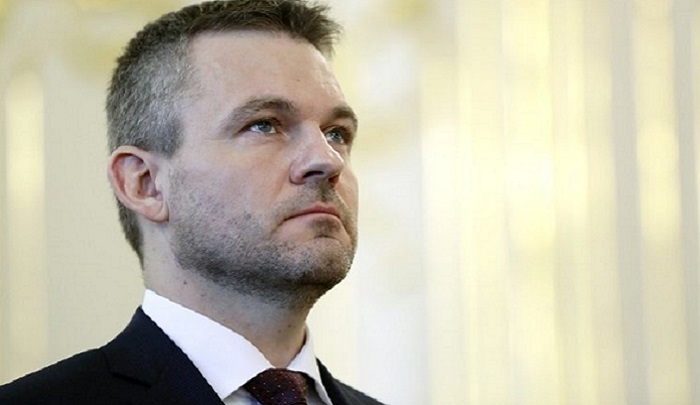 “Slovakia Is Latest EU Nation to Follow Trump’s U.S. Out Of ‘Harmful, Dangerous’ UN Migration Pact,” by Virginia Hale, Breitbart, November 26, 2018:
Slovakia is to be the latest nation to follow U.S. President Donald Trump’s lead in withdrawing from the United Nations (UN) migration compact, its prime minister has announced.
Speaking after a European summit on Brexit Sunday, Peter Pellegrini said: “Slovakia will not support this United Nations pact under any circumstances and will not agree with it.”
“As the prime minister, I reject the wording of the compact … and I refuse to enter it into effect in Slovakia,” he said of the document, which describes mass migration as “inevitable, necessary, and desirable”.
“Slovakia does not believe that there is no difference between legal and illegal migration,” Pellegrini told reporters in Brussels, stressing: “We consider economic migration illegal, harmful, and a security risk.”
Foreign affairs minister Miroslav Lajčák had threatened to resign last week unless Slovakia signs up to the so-called Global Compact for Safe, Orderly and Regular Migration, telling reporters that his priority in post was “to pursue the vision of a democratic, European Slovakia that is part of solutions”….
President Trump pulled America out of the agreement in December last year, commenting that the compact appeared to demand a “no borders, everyone can come in!” approach to managing migration flows.
Advocates argue the document is not legally binding and so would have no impact on national sovereignty, while the governments of Sweden and Germany claim signing up will benefit their countries and even reduce illegal immigration flows.
Experts have warned that the agreement, which requires signatories “commit to eliminate all forms of discrimination” with measures including state promotion of “diversity”, prevention of “hate speech” and opening up of welfare systems to illegal immigrants, was written in such a way that it would create a legal framework…..