EGYPT: MUSLIMS WHO KILLED CHRISTIANS TOLD WOMEN "WE WILL KILL THE MEN & CHILDREN & LEAVE YOU TO LIVE IN MISERY"

EGYPT: MUSLIMS WHO KILLED CHRISTIANS TOLD WOMEN "WE WILL KILL THE MEN & CHILDREN & LEAVE YOU TO LIVE IN MISERY"
BY CHRISTINE DOUGLASS-WILLIAMS
SEE: https://www.jihadwatch.org/2018/11/egypt-muslims-who-killed-christians-told-women-we-will-kill-the-men-and-children-and-leave-you-to-live-in-misery;
Coptic Christians continue to suffer and to be terrorized by jihadis who are determined to destroy their lives solely as punishment for their being Christian.
Jihadists injured at least 20 people and killed 7 when they ambushed Christians who were on a return trip from a monastery on the outskirts of Cairo.  In the words of the attackers:


We will kill the men and children and leave you to live the rest of your lives in misery.

These words are not out of the ordinary. They are a manifestation of the jihadis’ hatred of infidels and rejection of their humanity. They were an attempt by the jihadis to obey the Qur’anic command to cast terror into the hearts of those who disbelieve (Quran 8:60). 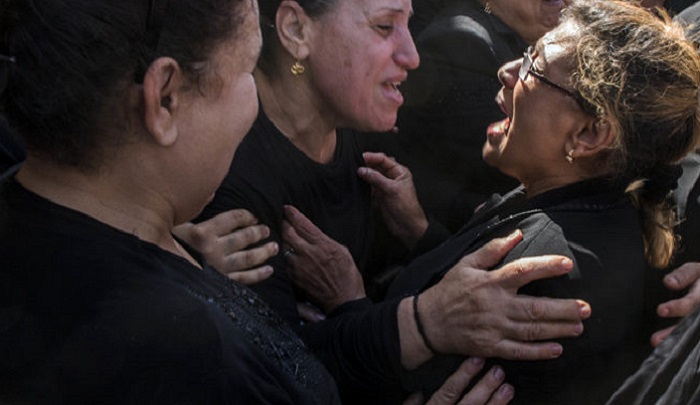 “‘We will kill the men and children and leave you to live the rest of your lives in misery,’” by Nourhan Mostafa, Madamasr, November 6, 2018 (thanks to The Religion of Peace):


Safwat Shehata, a man in his 40s from Upper Egypt’s Minya Governorate, stands outside the entrance of the emergency room at the Sheikh Zayed Hospital on the outskirts of Cairo. Inside, four of his relatives are receiving treatment for injuries sustained in Friday’s militant attack, in which gunmen ambushed Coptic Christians returning from a trip to the St. Samuel Monastery in Minya.
The assailants injured at least 20 people in the attack and killed seven more. Six of those killed were Shehata’s relatives, ranging in age from 12 to 55 years old.
At first, Safwat was unaware that his relatives were killed and injured in the attack — he did not even know they were visiting the monastery that day. “I saw news of the attack on the internet and I scrolled through the pictures on social media. I thought that the casualties were from [the governorate of] Sohag. I didn’t know that my cousins and their families were going on that day,” he says.
Seeing images of bodies covered in blood, Safwat asked God to have mercy on their souls. He kept monitoring news of the attack on Facebook until he received a call from a relative informing him that his cousin-in-law, Youssef Shehata, and five members of his family were dead.
“You must go and save the wounded in Cairo,” the relative told Safwat between cries. “The bodies are being buried here.”
Safwat was unable to attend his relatives’ burial because he had to go and support those who had been injured. “Three men and their children were killed. Only my female cousins and two children survived. Four families have been completely destroyed. Snatched away by death.”
On Friday morning, Youssef Shehata and nine of his relatives prepared to visit to the St. Samuel Monastery, also known as the Monastery of the Virgin Mary at Qalamoun.
As they were returning from the monastery, masked assailants intercepted the microbus. According to Shehata, they aimed their guns at the passengers and said they had a message for the women on board. “My cousins said that the attackers told them, ‘We will kill the men and children and leave you to live the rest of your lives in misery.’”…