While Britain debates a legal definition of the fiction of “Islamophobia” and that spurious concept continues to be the focus of the international media and human rights organizations, this is the real religious persecution around the world today. And no one should be surprised by this: The History of Jihad From Muhammad to ISIS shows that from the beginning of Islam, without any exception or letup at any time or in any place, Muslims waged war against Christians and endeavored to subjugate them as dhimmis under the rule of Islamic law. Why should anything be different now, especially in light of the fact that the Islamic doctrines that gave rise to this 1,400-year-long persecution have never been reformed or rejected by any Islamic sect or school of jurisprudence? 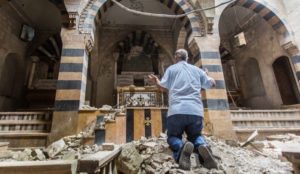 
“Aid to the Church in Need” released its “Religious Freedom Report” 2018 on Nov. 22, noting Christians continue to be the religious group most susceptible persecution.
Some 61% of the world’s population live in countries where religious freedom is not respected; in other words, 6 out of every 10 people around the world cannot express their faith with total freedom. Among them are almost 300 million Christians, or 1 out of 7, who live in a country of persecution, subject to violence, arrest, and human rights violations.
These were some of the figures unveiled on Thursday in the “Religious Freedom Report” 2018 by “Aid to the Church in Need” (ACN), the international pontifical Catholic charity and foundation that helps persecuted Christians worldwide….
The report that contains data between June 2016 to June 2018, shows grave violations of religious freedom in a total of 38 countries. In 17 of them there is serious discrimination on grounds of religious faith, and in the remaining 21, there is outright persecution of religious minorities, in some cases to the point of death….
The ACN study shows that in 22 countries, the reasons for attacks on religious freedom are rooted in radical Islamism, while in other countries the dominant causes are rooted in the authoritarianism of states or governments which pursue policies of “aggressive nationalism”. Among these countries are China, India, North Korea, Myanmar, Vietnam and Kyrgyzstan….