YOUTUBE MEDDLES IN SWEDISH ELECTION BY DELETING RIGHT-WING CONTENT~MASSIVE CENSORSHIP JUST 13 DAYS BEFORE THE VOTE
BY PAUL JOSEPH WATSON
SEE: https://www.infowars.com/youtube-meddles-in-swedish-election-by-deleting-right-wing-content/;  republished below in full unedited for informational, educational and research purposes:
Google-owned YouTube has been caught meddling in the Swedish national election on the eve of the vote by repeatedly deleting right-wing content.
A satirical cartoon video that lampooned Swedish Prime Minister Stefan Löfven was deleted within two hours after YouTube deemed it to contain “hateful” content.
The short film, entitled “To Make it Right,” made fun out of numerous Swedish politicians for their obsession with being politically correct. Apparently, this now qualifies as hate speech in the Scandinavian country.
According to a separate report, right-wing Alternative For Sweden party, which had its entire channel deleted and then restored by YouTube in July, has also had numerous videos made unavailable for viewing in Sweden.
“Complete scandal! With only 13 days left until the election day, YouTube is again on the offensive and censors all options for Sweden’s video clips,” the party said in a tweet.
https://twitter.com/AfS_riks/status/1034108904937082880
Earlier this month, a video by the Sweden Democrats, who are expected to perform well at the polls, was also deleted without explanation.
The video, which consisted of an hour and 40 minutes of quotes and historical background on the Social Democrats party and its links to Nazism, was wiped after receiving over 190,000 views.
“For two days our documentary on the history of the Social Democrats was published on YouTube. In a short amount of time the footage received 190,000 views before it was removed. We are waiting for an explanation,” the party said in a Twitter statement.
The deletions all occurred after Swedish corporate media group Bonnier met with Google and demanded they remove “hateful” content.
Given the power of social media giants to influence opinion, Google-owned YouTube has shown a repeated pattern of interfering in the upcoming Swedish election.
The company is in violation of its own terms of service by allowing brigading by left-wing mobs to censor completely legitimate content.
Infowars has been banned by Facebook. Please share this video on your own Facebook page to help us fight censorship.
_______________________________________________________________
Sweden: After upcoming election, “anti-Brussels party” planning to push for a “Swexit”
BY CHRISTINE DOUGLASS-WILLIAMS
SEE: https://www.jihadwatch.org/2018/08/sweden-after-upcoming-election-anti-brussels-party-planning-to-push-for-a-swexit; republished below in full unedited for informational, educational and research purposes:
Sweden is collapsing into utter chaos, with some no-go zones described as war zones, and sharia patrols having taken over some areas. Despite this, the government launched an “image of Sweden campaign” months ago, in order to downplay its failure to integrate Muslim immigrants and to cover up its skyrocketing crime rate, which forced its National Police Chief to declare the country to be on the verge of civil war. It has also been a nightmare for police, most of whom want to quit their jobs. In fact, Swedish politicians had to resort to calling out the army to no-go zones less than a year ago.
It will be quite a challenge to clean up the mess in Sweden, but the process may soon start:

The Eurosceptic Swedish Democrats Party is expected to take more than 20 percent of the vote in elections next month.

And its leader, Jimmie Akesson, is calling for a “Swexit” unless the EU reforms itself. Put mildly in the face of facts:

Its biggest campaign issue is migration as party leaders believe Sweden’s immigration policy has been too generous and that migrants have put huge social and economic strains on the country.

Let’s hope the citizens of Sweden vote to take back their country. 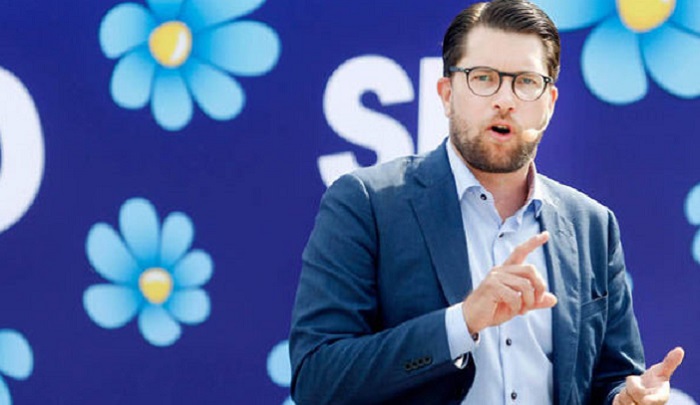 “Sweden election to spell nightmare for EU as anti-Brussels party set to be kingmaker,” by Alahna Kindred, Express, August 27, 2018:

THE Eurosceptic Swedish Democrats Party is expected to take more than 20 percent of the vote in elections next month.
It’s [sic] leader, Jimmie Akesson, has said he will hold a Swedish referendum on EU membership, while recommending withdrawal unless Brussels gives Sweden concessions that have been refused to Britain.
He said: “The EU is not the way to co-operate in Europe.
“We should renegotiate the terms of our membership of the EU and then the people should have their say.
Earlier this month two MEPs from the Swedish Democrats delivered an ultimatum to the EU.
They said unless the EU reforms itself then the party will urge Swedish voters to “take the next step on Swexit”.
A recent poll by SKOP that surveyed 2,100 people from August 16 to August 22 put the Swedish Democrats at 20.1 percent, surpassing the Moderate Party, which is the largest opposition party in the centre-right coalition in the Swedish Parliament.
The Moderate Party is currently polling at 17.1 percent and the leading party the Social Democrats have a larger lead of 24.5 percent.
There are 349 seats in parliament and 175 are needed for an overall majority.
There is no majority in the current government as it is distributed between two coalitions and the Swedish Democrats.
The Social Democrats, Left Party and the Green Party form the leftist coalition, which holds 159 seats.
The centre-right coalition called The Alliance is formed of the Centre Party, Liberal Party, Moderate Party and the Christian Democrats, which hold 140 seats.
The Swedish Democrats, which is described as the country’s nationalist party, holds 42 seats…..