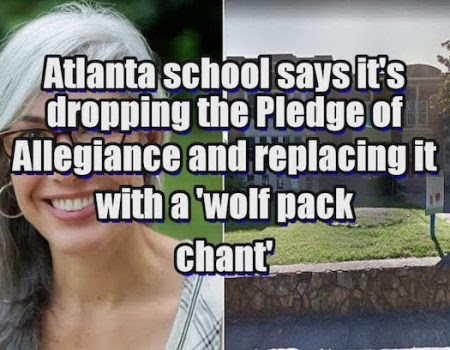 The “Wolf Pack Chant’ will be a new pledge created by the students and teachers. Zelski said the pledge, most likely named after the school’s wolf mascot, will “focus on students’ civic responsibility to their "school family", community, country and our global society.”
ATLANTA CHARTER SCHOOL REPLACES
PLEDGE OF ALLEGIANCE WITH
OATH TO GLOBAL SOCIETY!
Here's what's really behind an Atlanta charter school's attempt to pledge allegiance to global society!
Parents fight back against principal's
'fully inclusive and connected' scheme
Atlanta Neighborhood Charter School Principal Lara Zelski decided students will no longer recite the Pledge of Allegiance during the school’s morning meeting agenda, which she described to parents as “an effort to begin our day as a fully inclusive and connected community.”
DR. STEVE TURLEY REPORTS: