UNIVERSITY OF UTAH INSTRUCTOR OSTRACIZES CONCEALED CARRIERS & LOSES~FORCES THEM TO A 3'X3' 2ND AMENDMENT ZONE TAPED SQUARE AT BACK OF CLASSROOM, BUT WITHOUT A "DUNCE CAP" 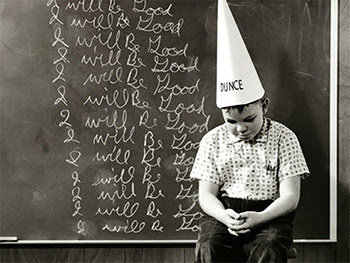 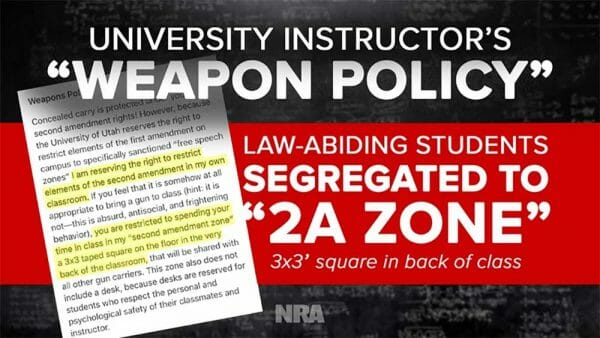 Fairfax, VA – -(Ammoland.com)- In an outrageous attempt to punish anyone exercising their Second Amendment rights, a University of Utah instructor tried to isolate concealed carry holders by forcing them into a tiny corner in the back of the classroom.
The unnamed graduate teaching assistant told her students on the first day of class this week that anyone carrying a firearm would be forced to stand in a “3 x 3 taped square on the floor in the very back of the classroom.”

Despite the fact that Utah is one of ten states that allows for campus carry, the instructor claimed she had the right to “restrict elements of the Second Amendment” in the class, adding that bringing a gun to class is “absurd, anti-social, and frightening behavior.”

The professor created a bizarre “Second Amendment Zone… that does not include a desk, because desks are reserved for students who respect the personal and psychological safety of their classmates and instructor.”

This absurdity did not sit well with at least one student. The 23-year old concealed carry permit holder, who asked to remain anonymous for fear of retaliation, alerted a friend who then contacted Utah State Representative Karianne Lisonbee. Rep. Lisonbee was on the phone immediately with officials at the University of Utah who took swift action against the instructor.
In a statement provided to the NRA, a University of Utah spokesman said the instructor was forced to redact the syllabus and apologize to students. Officials also removed the instructor from any teaching this semester.
The university said the class syllabus “violated both state law and university policy.

Before the instructor could remove her syllabus from her class website, the anonymous tipster grabbed a screenshot of it as evidence of her outrageous anti-gun bias.

AmmoLand Editors Note: If any of our readers know the name of this teacher please let us know in the comments below.

About:
Established in 1975, the Institute for Legislative Action (ILA) is the “lobbying” arm of the National Rifle Association of America. ILA is responsible for preserving the right of all law-abiding individuals in the legislative, political, and legal arenas, to purchase, possess and use firearms for legitimate purposes as guaranteed by the Second Amendment to the U.S. Constitution. Visit: www.nra.org