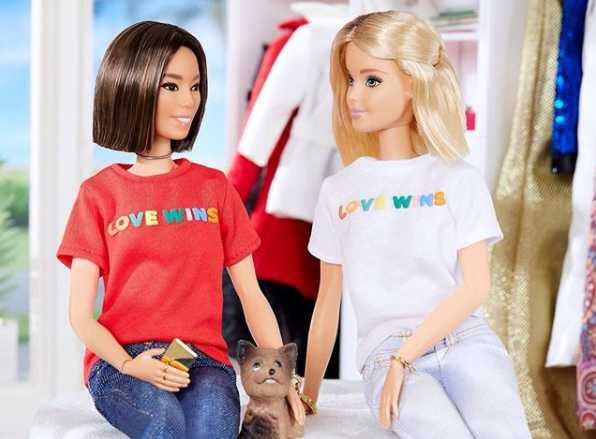 BARBIE INSTAGRAM ACCOUNT SHOWS DOLL WEARING HOMOSEXUAL ADVOCACY
"LOVE WINS" T SHIRT
BY HEATHER CLARK
SEE: http://christiannews.net/2017/12/02/barbie-instagram-account-shows-doll-wearing-homosexual-advocacy-love-wins-t-shirt/;
MALIBU, Calif. — The designers of the famed fashion doll Barbie recently released two photos on Instagram of the figure wearing a “Love wins” t-shirt as a way to show support for homosexual causes.
“Proud to wear this ‘Love Wins’ shirt with @songofstyle!” the Nov. 21 Barbiestyle post read in part, referring to designer Aimee Song of TwoSongs Los Angeles. A doll created in Song’s likeness accompanies Barbie in both photographs.
“Such an inspiring initiative and fabulous few days I have spent with Aimee; she’s a doll!” the post exclaims.
According to Racked, the Barbiestyle Instagram account is run by Vice President of Barbie Design at Mattel, Kim Culmone, along with Director of Design Robert Best and photographer Zlatan Zukanovic.

Song’s tee and sweatshirt company, which she operates with her sister, Dani, sells tops with messages such as “grlpwr,” “self love” and a vulgarly titled t-shirt that features an “embroidered naked woman.” Proceeds support breast cancer research.
“I’m beyond thrilled to have my own @Barbie doll and to wear my #LoveWins t-shirt from @ShopTwoSongs. I still can’t believe I got to partner with #Barbie as a brand that also celebrates diversity, kindness and acceptance,” Song wrote on Thursday, posting a photo of herself holding the doll, the two wearing matching tees.
“Beyond thrilled to be supporting the LGBTQ community with @BarbieStyle in our sold out #LOVEWINS tee,” the TwoSongs Instagram page also reads.

50% of proceeds from the shirts are donated to the homosexual advocacy effort The Trevor Project.
The photographs generated various reaction from the public, with some applauding the idea of Barbie joining in on homosexual advocacy, and others vowing to stay away from Barbie products after seeing the posts.
“This is really sweet and a good way to show kids that anyone can love anyone,” one follower wrote.
“Who needs Ken?” another remarked.
“Wow. This is so sad,” a third stated.
“Thank God I have no children yet, but when I do they’ll never play with Barbie,” another shared. “This is an abomination and not normal. Disgusting.”
Earlier this month, the makers of Barbie also announced that the company had released a doll in the likeness of Rio 2016 bronze medalist Ibtihaj Muhammad, complete with a Muslim hijab.
“We are so excited to honor @IbtihajMuhammad with a one-of-a-kind #Barbie doll! Ibtihaj continues to inspire women and girls everywhere to break boundaries. #Shero #YouCanBeAnything #GlamourWOTY,” it wrote on Nov. 13, sharing a photo of Muhammad holding the doll.
The decision was likewise met with controversy as some stated that they found it disturbing that Barbie had been dressed as a Muslim.