YES!: POPE (POOPUS) FRANCIS DISCUSSES PERVERSION OF EATING EXCREMENT AS A PARALLEL TO FOLLOWING "FAKE NEWS" FROM ALTERNATIVE MEDIA
WHAT CAN YOU EXPECT FROM A SOCIALIST-COMMUNIST-GLOBALIST?
ANSWER: HATRED OF THE U.S. CONSTITUTION
SEE:

‘You Free Us From Stain of Sin’

“Not only is Mary’s immaculate conception and her sinlessness not revealed in God’s inspired, infallible Word, it goes directly against the teaching of Scripture,” Mike Gendron of Proclaiming the Gospel Ministries told Christian News Network. “The Bible clearly states that the sin of Adam was spread to all his descendants, including Mary.”
He pointed to Romans 5:12, which reads, “[A]s by one man sin entered into the world, and death by sin, and so death passed upon all men, for that all have sinned,” as well as Romans 3:10 and 23, which teach that “there is none righteous, no, not one,” and that “all have sinned and fall short of the glory of God.”
Gendron also noted that Mary acknowledged her need of the Savior from sin when she said in Luke 1:47, “My spirit rejoices in God, my Savior.”
He said that not only is the doctrine of immaculate conception unbiblical, but Bergoglio’s assertion that Mary “frees us from the stain of sin” is an affront to the gospel.
“He profanely attributed to Mary what Christ alone had accomplished on Calvary’s cross,” Gendron said. “The pope’s prayer robbed Christ of His glorious accomplishment of purifying for Himself a people for His own possession (Titus 2:14). It was Jesus who ‘made purification of sins’ and ‘sat down at the right hand of the Majesty on high’ indicating His redemptive work was finished (Heb. 1:3).”
“The pope needs to stop exalting Mary as a sinless mediator and give all glory honor and praise to Jesus because it was His precious blood that purifies His people from ALL sin (1 John 1:7),” he stated.
_______________________________________________________


PLEASE READ THIS BOOK FOR A COMPLETE ANALYSIS OF THE CATHOLIC CHURCH:
"A WOMAN RIDES THE BEAST"
BY DAVE HUNT 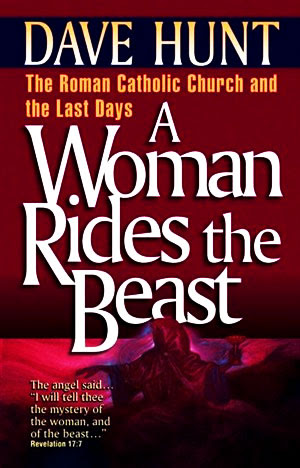