In case you are still one of those Christians who still think of Billy Graham and Franklin Graham as shining, guiding stars in your walk with the Lord, consider the following evidence to prove otherwise. The Grahams are as apostate and universalist as Rob Bell, and a bunch of other emerging types.

Take Heed Ministries of Cecil Andrews of Northern Ireland video: "Billy Graham, the Man and His Message", documents Graham's drift away from the doctrines of the Bible toward universalism, Catholicism, and ecumenism:

and Graham in front of the banner with the guitar dripping: 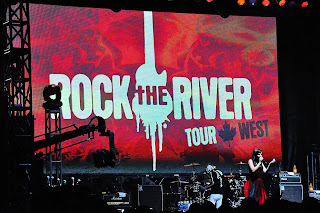 Jesus Is Lord has an article about Graham titled "Billy Graham, Catholicism and Apostasy": http://www.jesus-is-lord.com/billy.htm.

Cephas Ministry's pamphlet on Graham with timeline of universalism: http://www.cephasministry.com/evangelists_billy_graham_facts_pamphlet.html.

In Plain Site.org has an extensive expose of Graham's apostasies and corrupt associations: http://www.inplainsite.org/html/billy_graham.html.