LUTHERAN APOSTATES HELP TRANSITION THEIR SON FROM MALE TO FEMALE
THE MOTHER IS "OPENLY QUEER" AS PER:
https://www.jamiebruesehoff.com/ 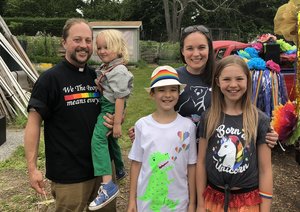 THE FAMILY'S STORY IN THEIR OWN WORDS 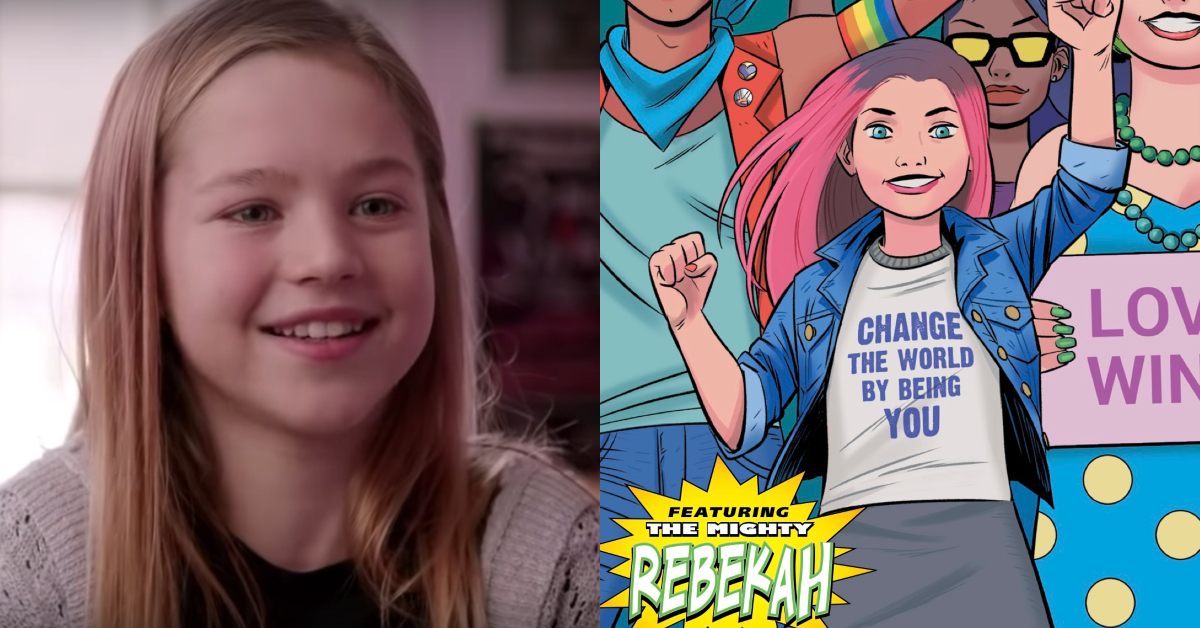 "Congratulations to New Jersey’s own superhero, the @MightyRebekah, on being featured in @Marvel’s #HeroProject. With your compassionate advocacy and boundless strength, you’re building a brighter future for LGBTQ+ kids. Keep changing the world.https://t.co/k8Kurbhzgx"
— Governor Phil Murphy (@GovMurphy) December 9, 2019

SARAH CORRIHER: WOKE DISNEY/MARVEL SUPERHEROES FOR YOU AND YOUR CHILDREN INCLUDE TRANSGENDERS
Marvel/Disney is intent on changing our culture, and that begins with your children. If they have their way, your kids will soon learn to admire men in drag and immigrants with foreign values. None of this is accidental.
SEE ALSO:
https://www.breitbart.com/entertainment/2019/12/09/disney-spotlights-12-year-old-transgender-girl-in-latest-marvel-series/
AND:

Pastor and Wife Let Son Identify as Girl Since Age 2, Prepping Him for Puberty Blockers

Pink Hair at the Age of Two

At the age of two Ben Bruesehoff’s parents, Pastor Christopher Bruesehoff and Jamie Bruesehoff of Holy Counselor Lutheran Church in Vernon, New Jersey, began dying their son’s hair pink. They explained that it was because he “gravitated toward typically feminine things.” He now calls himself “Rebekah.” He wears girls' clothing and sports long, pink hair. “Rebekah has always been gender non-conforming,” said the pastor’s wife. Ben added, “I felt like I was a girl because I liked the color pink and I liked girls’ clothes and how they wore their hair and stuff.”
Once Ben started identifying as “Rebekah” he became happy, his mom explained. “When I see pictures of Ben I just think of it as part of my past and now I’m me,” Ben said.

A Denomination That Embraces the LGBT Agenda

They could have concluded that their son’s suffering was the sign of a psychological problem. Instead, the pastor and his wife have embraced his gender confusion. Their church is part of the Evangelical Lutheran Church of America (ELCA), which embraces homosexual behavior. As it states on its website:

Because Jesus always judged cultural and biblical rules and laws using his principles of love and forgiveness, and rejected biblical rules that violated those principles, his followers are obligated to do the same. Those who say homosexual behavior is morally wrong in principle and should not be tolerated in the church must justify that judgment in terms of the principles of love and forgiveness. We cannot rely on St. Paul to do that for us in the 21st century. … St. Paul’s condemnation of homosexual behavior must be examined in light of Jesus’ principles as they apply in our culture, and not just blindly followed.

Further, the ELCA added: “If heterosexual Christians can manage to get around Jesus’ judgments, they certainly ought to be able to get around St Paul’s.” The statement likely refers to Romans 1:18-27, where Paul makes clear that homosexuality is a shameful sin. In effect, the ELCA is saying, “If you sin, I can sin, too.”
The Stream reached out to Pastor Bruesehoff. We did not receive a response prior to publication.
_________________________________________________
SEE ALSO:
https://www.advocate.com/transgender/2019/12/06/meet-marvels-first-transgender-hero-12-year-old-mighty-rebekah
SEE HOLY COUNSELOR LUTHERAN CHURCH HERE:
http://www.hc-lutheranchurch.org/

Chris Bruesehoff, a pastor in the Evangelical Lutheran Church in America, and his wife Jamie have decided to assist their son Ben, now 10, "transition" to become Rebekah.They say, "Following the advice of their doctor and council from a gender specialist, they made the decision when Ben was two.""Now 'she' is the person God intended her to be," the pastor and his wife claim.This "journey," as the pastor calls it, is a profile of how Christians are deceived---and in this case, a pastor who in turn deceives others.Sad. But not surprising.Chris Bruesehoff pastors an ELCA church in New Jersey.Now that they have publicized their experience with their son, now "daughter," they have become heroes of the Left---the secular Left and the religious Left.Chris and wife Jamie say their son Ben, now daughter Rebekah, has been transitioning from male to female since age two.Jamie says, "Rebekah has always been gender non-conforming. As young as two or three she gravitated to typically feminine things. By the time she was seven, all of this hit a crises point---her anxiety was crippling and her depression was becoming life threatening.""We were faced with a seven-year old kid who wanted to die. One time she punched out the screen of her second story window and tried to jump out," the mom says.Following the advice of their family doctor and a gender specialist counselor, the Bruesehoff family set out on their journey to assist their 7 year-old son in becoming their "daughter."It is impossible to overstate the love a parent has for their child.But sometimes actions rooted in the deepest love and best placed intentions can be wrong---dead wrong.Often, in times of greatest need, we become most vulnerable to deception. This is why the Bible defines Satan as the master deceiver.In fact Paul, speaking of "false teachers and deceitful workers masquerading as apostles of Christ said, "And no wonder, for Satan himself masquerades as an angel of light" ( II Corinthians 11).Certainly their are and have been false teachers since the beginning of the New Testament church. These teachers are motivated by a variety of motives.However, the most tragic are those Christian leaders who are sincerely misled in their own time of need.Over the past several years, I am aware of a number of politicians who have changed their position and votes regarding the homosexual agenda because they have a child involved in the behavior.A number of Christian leaders have also "evolved" because of these kinds of personal experiences.Regardless of how difficult it may be, the fact that one's child has issues is not reason to depart biblical teaching.Because in doing so, there is a tendency to influence others to see it your way---and further affirm your decision.This is clearly the case with Pastor Brusehoff and his wife Jamie.Jamie now has a blog with a significant and growing readership. She writes this:

My Transgender Daughter is a Beloved Child of God.

I am a lifelong Lutheran, a pastor's wife, a mom of three amazing kids. My firstborn child is named Rebekah. She is an excellent student with a deep love of learning. She is adored by her classmates and teachers. She's just as happy mountain biking and swimming in waterfalls as she is twirling in fancy dresses and performing on stage. She is strong and determined. She is a beloved child of God. She is ten years old, and she is transgender.

The pastor and his wife Jamie say they will leave the decision regarding surgery to Rebekah..."down the line."However, their next step, she says, will be puberty blockers which will "prevent her from going through male puberty and stop her from developing male characteristics---like facial hair, a deeper voice and an Adam's apple."Martin Luther once said, "For where God built a church, there the devil also built a chapel."With all due respect, I think this pastor and his wife are attending the "chapel" rather than the "church."The message of "the chapel" is God loves everyone and He doesn't make mistakes---therefore he loves Ben/Rebekah as he/she is, not in spite of, but because of...therefore God made him/her that way, in spite of what His Word of God says.Jamie said they had to peel back the layers with the help of counselors to discover that she wasn't a boy who liked pink--she was a girl.They also had to ignore what the Bible teaches on the matter. Genesis makes it very, very clear that God created man as male and woman as female. Together in marriage the male and female coming together as one reflects the completeness of God and His image.The religious Left---the chapel---are telling people that God is androgynous, or both male and female, which of course affirms gender fluidity and affirms the message of the LGBT in religious terms.Genesis 1:27 says, "So God created man in His own image; in the image of God, He created him; male and female He created them."Note that Scripture makes human sexuality clear by using two different pronouns---one singular, one plural---"him" and "them."Herein is the significant Truth. Man or mankind is one: all of us, men and women alike are created equally in His image, but amongst ourselves we are differentiated by gender as a species and divided as two components---male and female.God is neither male nor female. He transcends all such categories, it is not God, but we His creation, that are marked or set apart from one another in terms of sex or gender.To suggest that God is both male and female is heresy in its highest form. That notion stands in absolute contradiction of God's Word and biblical teaching on God as the Holy Trinity.John Piper in his book, "Luther The Preacher," quotes the Reformer: "Let the man who would hear God speak, read Holy Scriptures."Genesis is very clear that God made man as male and woman as female. And together He called them mankind---made in His image and likenessThe Reformation was born in Luther's heart out of his undying commitment to the Bible---God's Holy Word.The Lutheran Church was born out of that conviction. Pastor Brusehoff does not reflect Luther's heart or more importantly God's heart on the matter. He is, however, apparently responding from his own broken heart and the message from the chapel, not the church.Although the Evangelical Lutheran Church denomination has wandered from biblical teaching on both marriage and human sexuality, a good number of ELCA pastors continue to preach the Bible. Some of them are friends of mine. I thank God for them.In his book, "Luther the Preacher," Fred Meusen quotes Luther as saying, "When the preacher speaks, God speaks"---not necessarily affirming the message of all preachers, but suggesting that when the preacher speaks many hear the message as from God---and it should be.It is sad when anyone is led into deception.It is particularly sad and disappointing when a pastor is led into deception.And it's eternally damaging.Since this story became public, Chris and Jamie have found new international fame. News media in both America and Europe are telling their story, praising their courage.It is written, "To whom much is given, much will be required."This is a serious matter, and Christian preachers are particularly accountable.Paul's word to the Galatians is a word to all: "But even if we or an angel from heaven should preach a gospel contrary to the one we preached to you, let him be under a divine curse" (1:8).
Be Informed. Be Vigilant. Be Bold. Be Prayerful.
_______________________________________________________________
EXCERPTS FROM: https://www.faithwire.com/2019/11/11/lutheran-parents-celebrate-hormone-blocking-implant-for-transgender-child/

One of Jamie and the Rev. Christopher Bruesehoff’s children, who was born male, now identifies as a female and goes by the name Rebekah. On Nov. 1, Rebekah “had her second surgical procedure to place a hormone blocking implant in her arm to prevent her from progressing farther into puberty.”

In her post, Bruesehoff described the procedure as “medically appropriate, medically necessary, life-affirming, and often literally life-saving treatment.” It’s still not clear, though, what kind of lasting effects (read: damage) this kind of hormonal treatment can have on a child.
Posted by John at 2:55 PM